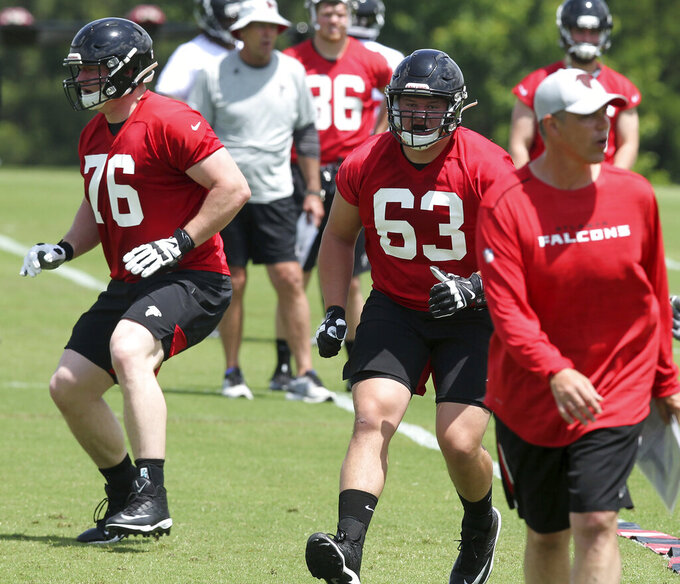 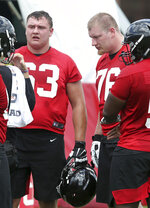 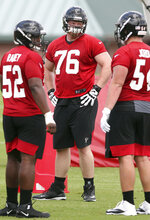 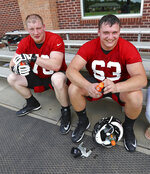 FLOWERY BRANCH, Ga. (AP) — No introductions were necessary for Chris Lindstrom and Kaleb McGary on the opening day of the Falcons' rookie minicamp.

The first-round picks were good friends even before they lined up on the right side of the offensive line from the start of Friday's workout.

They became friends on the same team at the Senior Bowl and again worked out together at the NFL combine. Then the Falcons selected Lindstrom and then McGary in the first round of the draft.

General manager Thomas Dimitroff traded second- and third-round picks to select McGary late in the first round after using the No. 13 overall pick to draft Lindstrom.

"It was really cool to build that relationship and then when he got drafted I was so happy I texted him right away," Lindstrom said. "It's been awesome together."

Lindstrom and McGary could open the 2019 season as the starters at right guard and right tackle, respectively. The two lined up together from the first snap on Friday.

"We parked them right next to one another," said coach Dan Quinn. "They already have a good chemistry together but I was pleased with the first day."

Quinn took bold action in firing all three coordinators following a 7-9 finish in 2018. Similarly, he spared no feelings when he said after the season only two starters on the line — center Alex Mack and left tackle Jake Matthews — played well enough to keep their jobs.

The Falcons' commitment to improving the line began by signing guards James Carpenter and Jamon Brown in free agency. Then Dimitroff and Quinn looked for more size in the draft.

Lindstrom (6-4, 310) impressed the Falcons with his quickness.

McGary (6-8, 324) is even bigger than Quinn expected. "When you first see him, you say that's a big fill in the blank," Quinn said with a smile.

But it was more than McGary's size that convinced the Falcons to draft the former Washington tackle.

"Then you see him come off the ball, those are things that get you excited about him because he's got quickness for a big man," Quinn said. "Not just top-heavy but legs and he's got power. So when he jumps off the ball, it was impressive today."

Last year's line failed to protect quarterback Matt Ryan , who was sacked 42 times, the second-highest total of his career. Even worse, Ryan was hit 113 times, the NFL's third-highest total.

The practice was Quinn's first in his new role as defensive coordinator. He led Seattle's defense before he was hired as the Falcons coach in 2015.

When asked as coach how his new defensive coordinator measured up, Quinn said "I'd say there's definitely work to be done, but man did I have a blast."

NOTES: There were 62 players in camp, including the draft picks, undrafted free agents and players invited for tryouts. Former Georgia Tech quarterback TaQuon Marshall is with the team on a tryout at wide receiver. "You like his makeup," Quinn said. "When you have a sense that you're going for it and you have something to prove, you get the best stuff." ... RB Marcus Green, a sixth-round pick from Louisiana Monroe, has a strained hamstring and watched from the sideline. Quinn said he wants to make sure Green is ready for the team's offseason program.