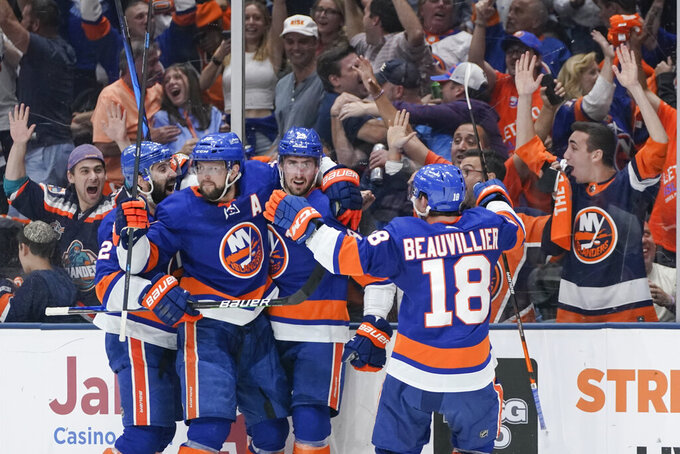 By then, Tierney had figured out it wasn't about the now-defunct indoor lacrosse team by the same name he played three seasons for. The NFL's New Orleans Saints knew it wasn't about them, either, but that didn't stop them from hopping aboard the bandwagon.

Since Boston Bruins coach Bruce Cassidy said while criticizing officiating, “They sell a narrative over there that it’s more like the New York Saints, not the New York Islanders," the moniker has caught on. “When the Saints Go Marching In” has become the unofficial fight song of the Islanders' playoff run, the old lacrosse team is accidentally back in the headlines and Cassidy's $25,000 fine from the NHL seems to be worth every penny for sparking such an unpredictable playoff story line.

“Sometimes it just takes a little bit of a weird spark to start one of these forest fires, and that’s what we’ve got going on right now,” said Tierney, who's now Hofstra's men's lacrosse coach. “Certainly glad for the Islanders, glad for Long Island and the Coliseum.”

Just under 1,200 miles away, the football Saints' social media team is having fun with it. Their Twitter account posted video of Islanders fans chanting with the message, “Saints fans are everywhere and LOUD.” When New York eliminated Boston in six games to move into the Stanley Cup semifinals, the Saints tweeted congratulations with a picture of smiling running back Alvin Kamara holding up six fingers and the line, “When the Islanders go marching in.”

Who saw this coming?

“Fans and social media run with a lot of things these days,” Islanders veteran forward Matt Martin said Friday. “Obviously I heard the chants the other night pretty well anytime we got a penalty. That’s what fans do: They enjoy it. They make this stuff entertaining.”

Tierney and fellow alumni of the National Lacrosse League's New York Saints are certainly entertained. The team that existed from 1989-2003 is getting a revival of sorts with some Islanders fans breaking out old gear with the logo of a Saint Bernard holding a lacrosse stick to pair with halos and angel wins.

Shirk described his old team as “a ragtag group," and Tierney fondly recalls making $124.90 a game after taxes. The way former player Gavin Prout describes it, the Saints were a lot like the Islanders are now.

“They battled through a number of years and people always stood by the Saints,” Prout said. “We did battle through a lot of adversity both on and off the floor, but it was always team first and the guys were fantastic.”

The lacrosse Saints also played at Nassau Coliseum, which will be rocking again when the Islanders face the Tampa Bay Lightning with a spot in the Stanley Cup final at stake. Tierney watches now with pride about the arena's lacrosse past and present with the New York Riptide and hopes the Islanders can hang another banner — even though it'll go up in a sparking new building up the road at Belmont Park.

“To have 12,000 people coming out of a pandemic and chanting ‘New York Saints’ and people wearing T-shirts and jerseys and things like that, it’s like Armageddon in your mind and you just flash back to that point in time,” he said. “With them moving, if they can have a going-away party and win this whole thing, that would be awesome.”