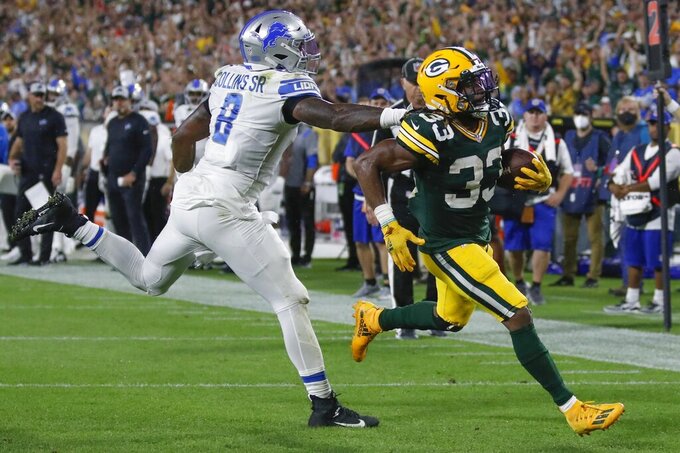 OPENING LINE: 49ers by 4, according to FanDuel SportsBook

TURNOVER DIFFERENTIAL: Packers minus-1; 49ers minus-1.

PACKERS PLAYER TO WATCH: RB Aaron Jones. Jones had three TD catches and a TD run on Monday night vs. Detroit, giving him 42 TDs over his past 40 games. Jones became the eighth RB since 1950 and first since Danny Woodhead in 2015 with at least three TD catches and a TD run in the same game. Jones' four games with at least three TDs since 2019 are the most in the NFL in that span.

49ERS PLAYER TO WATCH: CB Josh Norman. The 33-year-old Norman made his San Francisco debut last week and had two pass interference penalties but otherwise looked solid against the Eagles. He will have a much tougher test this week when he has to match up with 2020 All-Pro Davante Adams.

KEY MATCHUP: San Francisco DE Nick Bosa vs. Green Bay tackles. Bosa looks back to the form he had in 2019 when he won Defensive Rookie of the Year and dominated the Packers. Green Bay has serious questions at left tackle with 2020 All-Pro David Bakhtiari out with a knee injury and Elgton Jenkins out with an ankle injury.

KEY INJURIES: Bakhtiari remains on the PUP list for Green Bay and OLB Za’Darius Smith is also sidelined by a bad back. ... Jenkins hurt his ankle Monday night and didn't make the trip. ... The Niners are banged-up at RB with Raheem Mostert going down with a season-ending knee injury in Week 1 and Jamycal Hasty now sidelined by an ankle injury. Elijah Mitchell (shoulder) is doubtful but Trey Sermon (concussion) has been cleared to play.

SERIES NOTES: The Packers are making their fourth trip to Levi's Stadium in the past 22 months. The Niners won the first two of those meetings in the 2019 regular season and the NFC title game that season with Green Bay winning last year. ... Green Bay QB Aaron Rodgers threw for 305 yards and four TDs in the meeting last season and has a 106.9 rating in eight regular-season starts against San Francisco. ... Adams had 10 catches for 173 yards and a TD last year in the matchup. ... 49ers QB Jimmy Garoppolo has won both starts against Green Bay, throwing for 253 yards and two TDs in a 37-8 win in the 2019 regular season and throwing just eight passes in the NFC title game.

STATS AND STUFF: Rodgers moved past John Elway into 10th place on the career yardage list with 51,633 yards passing. ... Rodgers had his 25th game with at least four TD passes and no INTs, one behind Tom Brady and Drew Brees for the most ever. ... Green Bay has a league-low one sack on the season. ... The Niners won road games the first two weeks for the fifth time. They went to the Super Bowl the last three times that happened, winning it all in 1988 and '89 and losing in the 2019 season. ... San Francisco has failed to score on the opening drive in eight straight games, with four three-and-outs, two other punts, a lost fumble, and a fourth-down stop. That’s the longest drought for the Niners since an 11-gamer in 2007-08. ... San Francisco had two TD drives last week that were longer than 90 yards for the first time since Dec. 6, 1992, against Miami, according to Elias Sports Bureau. ... Garoppolo had a TD pass and TD run last week in the same game for second time in his career.

FANTASY TIP: San Francisco WR Deebo Samuel had six catches for 93 yards last week and clearly looks like Garoppolo’s top target early this season. Samuel's 282 yards receiving are the second most in the Super Bowl era through two games for the 49ers, trailing only Jerry Rice’s 285 in 1989.