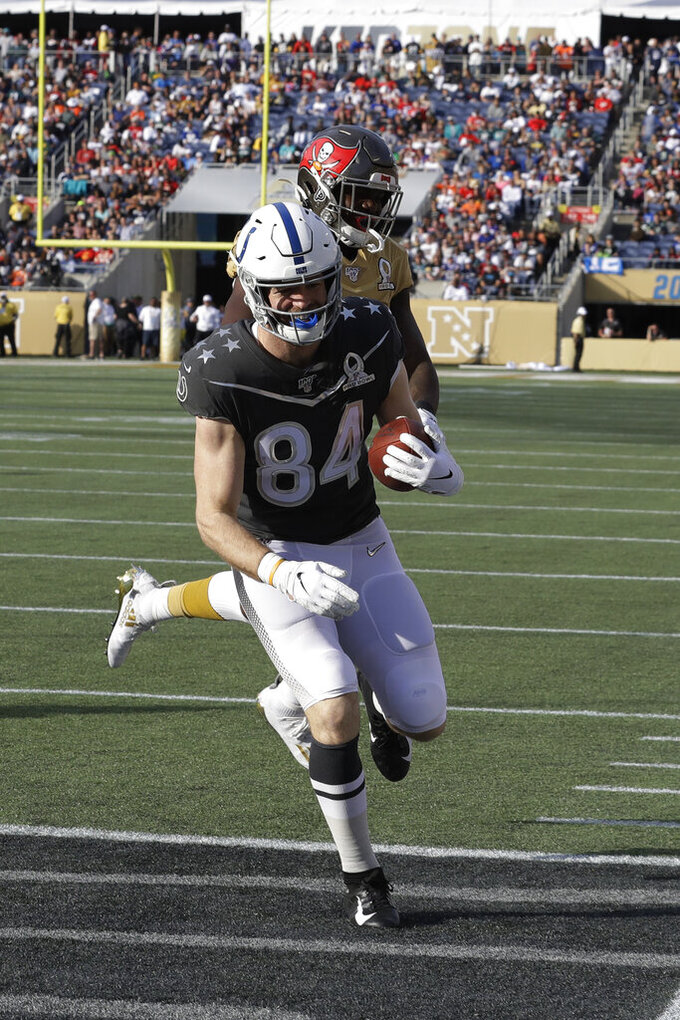 AFC wide receiver Courtland Sutton, of the Denver Broncos, (14) scores a touchdown ahead of NFC linebacker Shaquil Barrett, of the Tampa Bay Buccaneers, (58), during the first half of the NFL Pro Bowl football game, Sunday, Jan. 26, 2020, in Orlando, Fla. (AP Photo/Chris O'Meara) 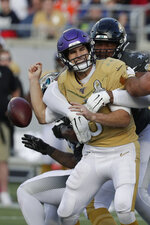 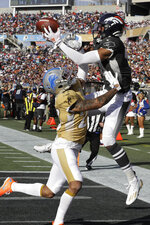 Smith and his NFC teammates learned about Bryant's death while they were in the locker room getting ready for the NFL's all-star game Sunday. Smith suggested the best way to pay tribute the late NBA great was to mimic his fadeaway jumper after big plays.

So they did — repeatedly.

It was one of several ways NFL players remembered Bryant during the celebratory event, which the AFC won 38-33 for its fourth consecutive victory in Orlando.

“I don't even want to talk about it anymore,” Smith said in the locker room hours later. “I don't want to get emotional.”

Detroit cornerback Darius Slay didn't duck his feelings. Slay grew up idolizing Bryant so much that he had a custom Lakers hoodie made to warm up in before NFL games. Slay also got to meet Bryant a few years back.

“It's heart-wrecking," Slay said with tears in his eyes. "There's not any words you can say. I'm in shock. I just imagine him growing old, being part-owner of the Lakers and having a future son I could cheer for next. It's just shocking. Me saying the words ‘Kobe's gone,' that's just crazy."

Bryant died in a helicopter crash early Sunday near Calabasas, California, and the news spread shortly before the game. It put a damper on the NFL game held on the other side of the country.

Players checked cellphones on the sidelines for updates, all of them looking for information and answers.

“It shocked the whole locker room," Philadelphia defensive tackle Fletcher Cox said. “Nobody thought it was true, but it was. It's a sad day for sports."

Smith, Slay and Tampa Bay’s Shaq Barrett got together following a second-quarter sack and delivered their first “Kobe J." Even more NFC teammates performed the routine following a fumble in the third.

Green Bay receiver Davonte Adams pointed to the sky and flashed the No. 24 on his fingers as an ode to Bryant’s jersey after a touchdown catch in the third.

Seattle quarterback Russell Wilson led a prayer for Bryant and his family before the game.

The NFL also held a moment of silence for Bryant at the 2-minute warning in the first half, showing the retired NBA star’s picture on the scoreboards while announcing his death at age 41.

Several guys removed their helmets during the break. Others took a knee and prayed. Fans broke the silence by chanting “Ko-be! Ko-be!”

“I felt hurt,” Chicago safety Eddie Jackson said. “It's sad. I don't know how it feels to lose a husband and a child, so I don't understand what the family's going through. It's got to be tough."

Aside from the Bryant tributes, the NFL's annual all-star game went as expected. There were big plays everywhere and few tackles anywhere. The teams combined for 834 yards and 10 touchdowns.

The play of the day was Pittsburgh linebacker T.J. Watt’s 82-yard fumble return in the fourth. Jacksonville's Calais Campbell beat Dallas’ Travis Frederick and sacked Kirk Cousins on a fourth-and-goal play from the 9. Campbell stripped the ball, which Watt scooped up and went untouched the other way to put the AFC ahead 38-27.

The NFC had a chance to rally late and tried to take advantage of a new rule that allows the scoring team to retain possession by facing a fourth-and-15 play from its own 25-yard line. Cousins threw a deep ball that Baltimore safety Earl Thomas intercepted.

Campbell was named the AFC's defensive player of the game. Baltimore's Lamar Jackson was the offensive MVP.

Jackson threw for 185 yards and two touchdowns. He also threw an interception. Houston’s Deshaun Watson threw for 148 yards, with a touchdown and a pick.

Tennessee’s Ryan Tannehill hooked up with Jacksonville’s DJ Chark for a 60-yard score in which officials opted not to rule him down after two defenders touched him.

Wilson gave his NFC starting spot to New Orleans quarterback Drew Brees, who is contemplating retirement. Brees said this week he will take some time before deciding on his future.

The NFC’s top highlight was Cox rumbling 61 yards for a score. Minnesota’s Harrison Smith intercepted a pass from Watson at the 3-yard line and returned it to the 39 before lateraling to Cox, who took it the rest of the while.

No one tried to tackle the 310-pound Cox. Denver receiver Courtland Sutton slapped at the ball for the final 20 yards.

“I'm glad nobody did try to stop me,” Cox said. “It was fun. I was looking for somebody to pitch the ball to, though. Guarantee I was. Get this thing out of my hands.”