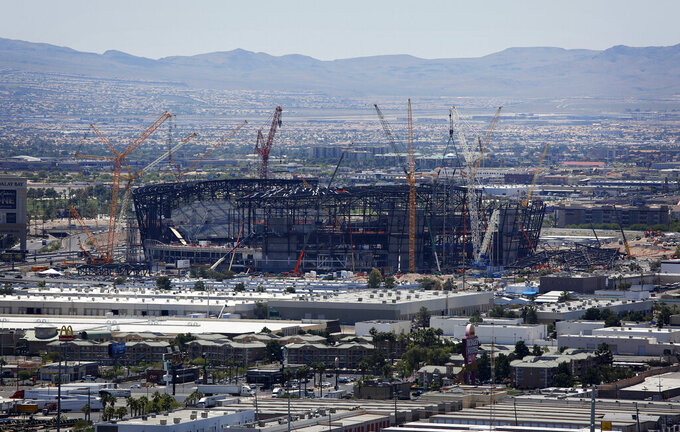 FILE - In this June 4, 2019, file photo, construction cranes surround a football stadium under construction in Las Vegas. The most compelling dramas in the NFL this season unfolded on the field, not off of it. And any thought that the league was in jeopardy of losing its spot as America's favorite sport has been set on the back burner. (AP Photo/John Locher, File)

The most compelling drama in the NFL this season unfolded on the field, not off it.

And any thought that the league was in jeopardy of losing its spot as America's favorite sport has been set on the back burner, which is mostly where the domestic abuse cases, national anthem controversies and even the concerns about player safety resided for the bulk of the season.

To be sure, 2019 was far from perfect. Antonio Brown, a handful of overmatched officials and even a cameo appearance by Colin Kaepernick kept a spotlight on the warts this behemoth of a league will always carry. And certainly the Super Bowl will offer an opportunity to discuss Chiefs receiver Tyreek Hill's history with domestic violence and the NFL's response to it.

But for the better part of the season, the stickiest topics have included the quarterback-turned-pitchman Baker Mayfield, and his overrated Cleveland Browns, the underachieving Cowboys and the possible end of the Patriots' dynasty, to say nothing of a legion of rising young stars who were scattered throughout the league. It is led by Patrick Mahomes, the 24-year-old quarterback who brought the Chiefs to the Super Bowl to face the 49ers, the team trying to complete the NFL's version of a fairy tale by going from 4-12 to hoisting the Lombardi Trophy in the span of a year.

America's ever-expanding gambling landscape, the continued strength of fantasy football, the league's steady growth in Britain and other countries, along with a fair share of good games placed in the correct time slots and made available on a growing number of platforms also played roles in keeping eyeballs focused on the games.

It all helps explain the league's back-to-back 5% TV ratings increases — two straight years with an uptick after a two-year stretch (2016-17) during which the NFL's status as the king of American sports took a hit, due in part to President Donald Trump's withering criticism and, more broadly, to the league's problematic handling of myriad problems that came fast and furious. The league accounted for 47 of the 50 most-watched shows on TV last year.

“The NFL is in a better space leading up to the ... Super Bowl, than they have been in a few years,” said Bettina Cornwell, the academic director at University of Oregon's Warsaw Sports Marketing Center. “Less limelight can be a good thing.”

While staying out of the constant crisis-management loop, the league took advantage of trends that have been evolving for a decade or more.

The NFL's embrace of fantasy football at the beginning of the 2000s — replete with in-stadium Wi-Fi advances, stat-heavy tickers and updates that permeate the telecasts and both league and team endorsements with fantasy websites — set a template that, in turn, positioned the league to take advantage of the more recent expansion of legalized gambling.

Long the most reluctant (and hypocritical) of the American pro leagues when it came to acknowledging the reality that gambling is a key driver of fan interest, the NFL signed a marketing deal with Caesars Entertainment at the start of 2019. A handful of teams have inked their own casino deals, as well. Next season, the Raiders are moving into a $1.8 billion stadium in Las Vegas — a city that NFL officials worked hard to keep at arm's length for decades.

“They were probably the last one at the table, but they took the most in from what other leagues are doing,” marketing expert Joe Favorito said. “They're doing it with fan engagement on mobile phones, games that give fans ability to win money or prizes, games where it's as easy as trying to predict what's going to happen on the next play.”

This season also marked the beginning of a changing of the guard, of sorts, among the star set.

Mahomes dethroned Patriots QB Tom Brady as the league leader in jersey sales, according to the NFLPA. Seven of the top 12 on the jersey list, including Mayfield, Cowboys running back Ezekiel Elliott, Ravens quarterback Lamar Jackson and Giants running back Saquon Barkley, were 26 or younger. Only four of the top 10 were quarterbacks — a lower-than-usual number that could be a subtle signal of a generational shift in the fan base.

With one year left before the end of the current collective bargaining agreement, there appears to be far less friction between the league and its union than last time they reached this point, in 2010.

And if the tacit acceptance of gambling felt like a seismic shift, the next contract could bring another: Last year, the league and union announced the formation of a committee to study and assess alternatives to painkillers — a signal that a long-sacrosanct ban on marijuana could soon be relaxed.

All of which bodes well for the league as it approaches the end of its current TV contract. The $1.9 billion-a-year deal with ESPN for Monday Night Football expires after the 2021 season, and the approaching deadline brings with it the possibility that the league might want to open up bidding on all its contracts for a full reset. No surprise, then, that among the thorniest issues in the new CBA will be the NFL's desire to add a 17th regular-season game and the players' hard stance against it because of the health concerns it presents.

“Questions about the next round of (TV) negotiations have already become an overhang for many of our media companies, as investors debate which package will end up where and at what cost,” the analysts at the media research group MoffettNathanson wrote in a September newsletter.

During the season, the NFL accounts for 25% of ESPN's and CBS' aggregate gross ratings points and 24% of NBC's, the analysts wrote — a sign of the outsize impact the NFL has on an ever-splintering TV landscape.

All the attention-shifting choices out there for U.S. sports fans only increase pressure on the NFL to keep its house in shape — and to be sure, there are still plenty of festering issues that could derail it.

— This year's officiating was widely regarded as below-par, in large part hampered by the league's new pass interference rule that allows calls and non-calls to be reviewed; it created confusion across the board and didn't necessarily solve any big-picture problems.

— The NFL is still grappling with how to make its game safer in the wake of an epidemic of head injuries that has forced rules changes and is chipping away at the sport's grass roots in key areas.

— The league continues to struggle in how it vets and disciplines its players, as illustrated by the ongoing cases involving Brown (cut by the Patriots after being accused of rape) and Hill (not disciplined by the league after authorities declined to charge him with domestic abuse).

— Kaepernick, whose hastily scheduled and relocated “workout” in November turned into a circus that brought everyone's intentions into question, has not disappeared. Nor has the cause he promoted — a greater spotlight on social justice and police violence against African Americans.

— Next season will also take place during an election year. It was the Trump vs. Hillary Clinton race, along with Trump's disdain for the league in the wake of the national anthem controversy fueled by Kaepernick, that got some (deserved) credit for some of the NFL's diminished popularity in 2016 and 2017.