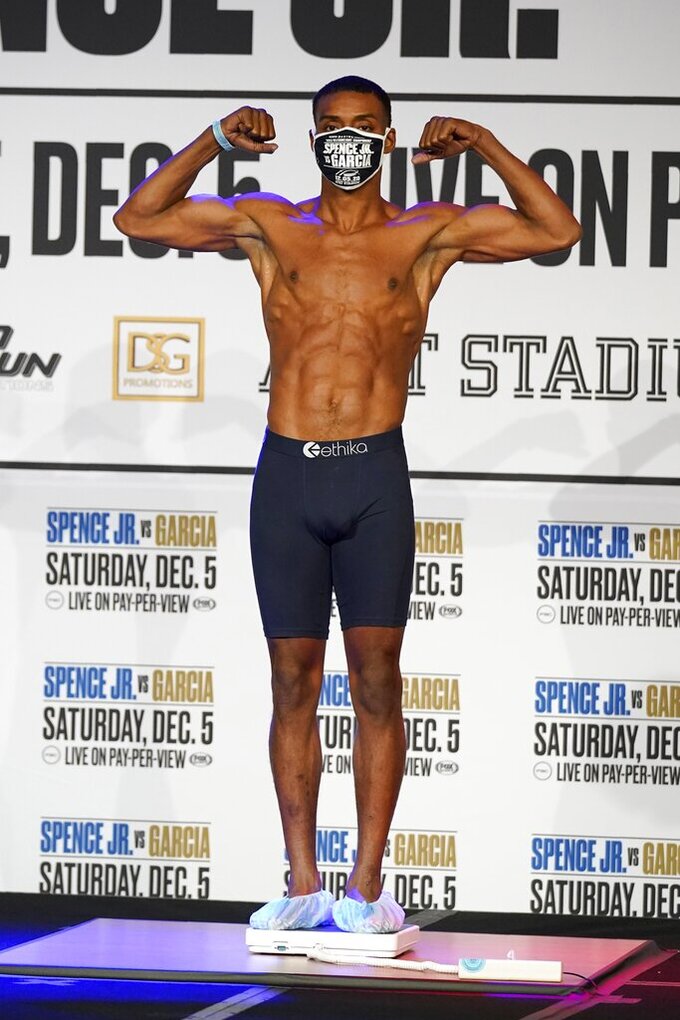 Boxer Errol Spence Jr., poses as he weighs in for a title match against Danny Garcia in Dallas, Friday, Dec. 4, 2020. Spence Jr. is putting his WBC and IBF welterweight titles on the line against Danny Garcia in his first fight since escaping serious injury in a high-speed car wreck in Dallas that led to misdemeanor drunken driving charges and could have derailed a promising career. The 30-year-old Spence is undefeated in 26 fights with 21 knockouts. Garcia, a 32-year-old from Philadelphia, is 36-2 and has 21 knockouts as well.(AP Photo/Tony Gutierrez)

ARLINGTON, Texas (AP) — Errol Spence Jr. changed his lifestyle after escaping serious injury in a high-speed car wreck that led to misdemeanor drunken driving charges in Dallas and could have derailed a promising boxing career.

The welterweight champion moved out of downtown Dallas for a quieter life in the suburbs and got back to training once doctors cleared him to keep fighting. Now it's time for Spence to get back in the ring.

Spence is set to defend his WBC and IBF titles Saturday night on against Danny Garcia at AT&T Stadium, another hometown bout for Spence and his second on the home field of the NFL team that adopted him, the Dallas Cowboys.

“This is the most important fight of my life,” said Spence, undefeated in 26 fights with 21 knockouts. “This is my redemption fight. This is my comeback fight. And I won’t accept anything less than a victory.”

In September 2019, Spence added the WBC welterweight title to his IBF strap with a thrilling split-decision victory over Shawn Porter in Los Angeles.

A month after beating Porter, Spence flipped his Ferrari while speeding on a Dallas street in the early morning hours. Spence was ejected but didn’t sustain any broken bones or fractures and was treated for facial lacerations. He said the go-ahead for training came after doctors told him he had no bleeding on his brain.

“I feel my accident helped me a lot with just basically put my feet on the ground and humbling myself and realizing that a lot of people don’t get a second chance,” the 30-year-old Spence said. “I feel like you're going to see a better me overall and I’m here to show everybody why.”

The 32-year-old Garcia (32-6, 21 knockouts) is fighting for the first time since a 12-round decision in January over Ivan Redkach in which Garcia said his opponent bit him.

Garcia was supposed to fight Spence around the same time before Spence's accident. Instead, the former two-division champion earned a second consecutive victory.

“Boxing is a sport of timing,” Garcia said. “And the time is now. I feel great. Had a tremendous camp. I did everything I was supposed to do. Now it’s time to go out there Saturday night and do what I do best and win.”

Spence twice defended his IBF title near his hometown on properties of the Cowboys. The first was over Carlos Ocampo at team headquarters 30 miles north of Dallas in Frisco.

The second was against Mikey Garcia in early 2019 at AT&T Stadium, before beating Porter. The accident led to a much longer layoff for the 2012 U.S. Olympian — close to 15 months.

“I think it did renew my focus and got me back focused on the things that got me to the top of the mountain,” Spence said. “And that’s just being in the gym every day and things like that. At some point I was, after a fight, started taking a week off, to two weeks off, to a month off, to basically being in the gym when it was fight time.”

Garcia lost the WBC belt when Porter took a unanimous decision a little more than two years ago. But the Philadelphia fighter has fond memories of Texas, recalling a victory for his first world title in Houston eight years ago.

“I have a lot of fans here in Texas,” Garcia said. “I feel like it’s a home away from home. It’s a special place for me. I don’t look at it like I’m going away. I just look at it as I’m going to handle business.”