Stafford, Rams easing back to work after Super Bowl win 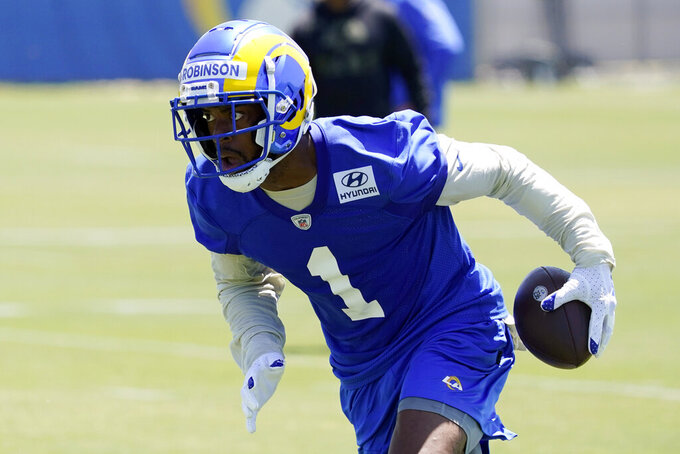 THOUSAND OAKS, Calif. (AP) — Matthew Stafford had an offseason injection in his elbow to quell an unspecified minor injury that nagged him throughout the Los Angeles Rams' run to the Super Bowl.

He didn't throw serious passes during organized team activities Monday, and he might not do so again until training camp.

Stafford still believes he can get plenty of work done during the Rams' early preparations for their chase of a second ring.

“The biggest thing for me at this point is to continue to master — as much as I can — this offense, and continue to teach it the way Coach teaches it,” Stafford said. “That's my job, to be a coach on the field.”

Most observers thought Stafford already had a pretty solid grasp of Sean McVay's offense while passing for 4,886 yards last season before leading Los Angeles to four consecutive playoff victories in an impressive first year on the West Coast.

But Stafford thinks he can improve, and he also realizes he needs time to form a bond with new receiver Allen Robinson.

With the regular-season opener against Buffalo still 3 1/2 months away, Stafford has plenty of time to heal his elbow and to hone his game.

“It's all details, in every little aspect of it,” Stafford said. “The more ownership I can have, the better we'll be.”

The Rams’ success has led to dramatically increased fame and fortune for their biggest names, resulting in everything from national TV commercials for McVay and Stafford to amplified celebrity for Super Bowl MVP Cooper Kupp, who couldn’t even go out to watch his friend's kid's youth football game recently without being besieged by fans.

But McVay set the parameters of his perspective on the Rams’ new season immediately after a relaxed first workout of voluntary OTAs at the team's training complex.

“This is a brand-new year,” he said. “We're not defending anything. We're trying to be the best version of the 2022 Rams that we can possibly be. What that looks like is an exciting thing that's evolving and ever-adapting as the season goes on.”

Several veterans didn't participate in practice Monday, including All-Pros Aaron Donald and Jalen Ramsey. Receiver Van Jefferson and new cornerback Troy Hill didn't appear to be practicing even though they've been participating in other stretches of the offseason program, while running back Darrell Henderson sat out with a “soft tissue” injury that was reaggravated last week, according to McVay.

The Rams aren't pushing any of their players to return for OTAs, particularly given the team's short offseason. Los Angeles' mandatory minicamp is in just two weeks before the summer break ahead of training camp.

McVay had nothing new to report about a contract extension for Donald, who turned 31 on Monday. The three-time NFL Defensive Player of the year capped his ninth season by making the final defensive play to stop both San Francisco's Jimmy Garoppolo in the NFC championship game and Cincinnati's Joe Burrow in the Super Bowl.

Donald typically doesn't attend any offseason workout that isn't required, so his absence was no surprise. Donald's representatives and the Rams have been talking about an extension, but the Rams have no public concerns that Donald would hold out, as he did before getting his six-year, $135 million extension with $87 million guaranteed in 2018. Donald is headed into the fourth season of that deal.

“Dialogue has been good,” said McVay, who conveyed birthday wishes to Donald on Monday morning. “He's done a great job of communicating. He gets a chance to spend time with his family right now, so we feel good about that.”

McVay has a bigger offseason event than OTAs to attend this summer: He's finally getting married to Veronika Khomyn, his longtime fiancée. The couple donated $50,000 to the American Red Cross this month in support of Khomyn's native Ukraine, and McVay again spoke of the perspective he has gained from the war experiences of Khomyn's family.

“As a coach, you're always so solution-oriented that sometimes you feel helpless (in more complex situations),” McVay said. “These are the small things that you can do that contribute to hopefully ending this sooner than later.”