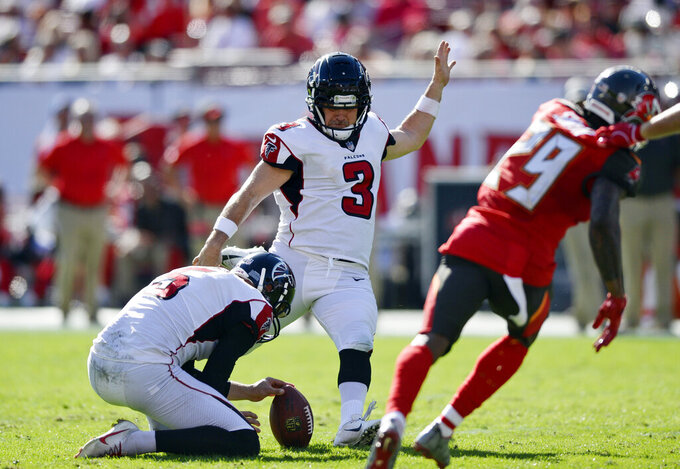 FILE - In this Dec. 30, 2018, file photo, Atlanta Falcons' Matt Bryant (3) kicks a field goal against the Tampa Bay Buccaneers during the first half of an NFL football game in Tampa, Fla. The Falcons are bringing back veteran kicker Matt Bryant after failing to find his successor during the preseason. The team has agreed to terms with the 44-year-old Bryant, who made 20 of 21 field-goal attempts in 2018. (AP Photo/Jason Behnken, file)

FLOWERY BRANCH, Ga. (AP) — The Atlanta Falcons are bringing back 44-year-old kicker Matt Bryant after failing to find his successor during preseason.

The team has agreed to terms with Bryant, who made 20 of 21 field-goal attempts in 2018. Bryant holds the franchise record with 1,122 points since joining the Falcons in 2009. When injuries shortened his 2018 season, Giorgio Tavecchio emerged as the possible long-term replacement.

Bryant was released in a cost-cutting move after the season. He returned for a workout Friday. Tavecchio and Blair Walsh could not win the job in the preseason.

Bryant has been extremely reliable for Atlanta, including on long-distance kicks.

The Falcons cut one 2019 draft pick, wide receiver Marcus Green, a sixth-rounder from Louisiana-Monroe who led the team in punt and kickoff returns in the preseason.

Among other notable players waived were running back Tony Brooks-James, wide receiver Christian Blake, and tight end Logan Paulsen, who had nine catches and made 10 starts in 2018.