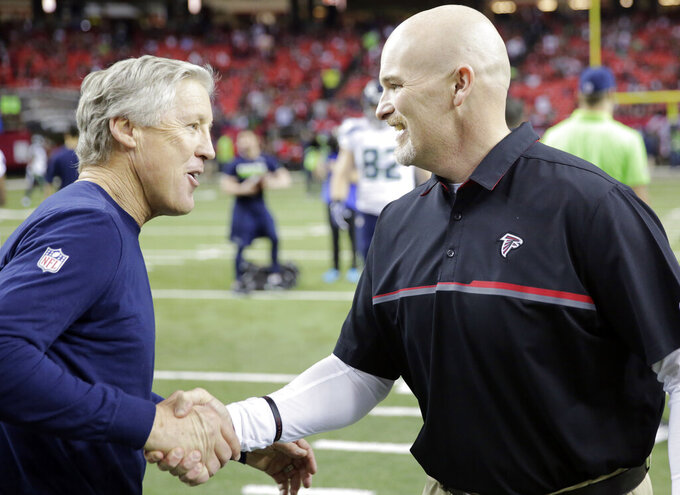 FILE - In this Jan. 14, 2017, file photo, Seattle Seahawks coach Pete Carroll, left, speaks with Atlanta Falcons coach Dan Quinn before an NFL football NFC divisional playoff game in Atlanta. Quinn says he never backs down from a challenge. Just in time for a visit from his mentor, Seattle coach Carroll, Quinn is facing the biggest challenge of his career. Quinn’s Falcons will try to stop a five-game losing streak when they face the Seahawks on Sunday. (AP Photo/David Goldman, File) 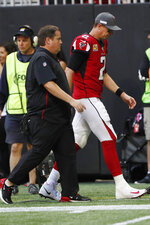 ATLANTA (AP) — Dan Quinn says he never backs down from a challenge.

Just in time for a visit from his mentor, Seattle coach Pete Carroll, Quinn is facing the biggest challenge of his career.

Quinn's Atlanta Falcons will try to stop a five-game losing streak that threatens his job security when they face the Seahawks on Sunday. Quinn worked in two stints as an assistant with Carroll, including as defensive coordinator from 2013-14, before he was hired as Atlanta's coach.

Quinn has been unable to sustain momentum from a 2016 Super Bowl season and return trip to the playoffs in 2017. After a 7-9 finish last year, Quinn could be coaching to protect his job as the floundering Falcons (1-6) face the Seahawks (5-2).

"For sure it's been challenging, but I've never been one who felt like I'm out of the fight," Quinn said Wednesday. "Some of the best things I've done, my back was against the wall. I don't ever mind being in that position."

Seattle linebacker Bobby Wagner, one of the few remaining Seahawks veterans who played under Quinn, said it's strange to see the Falcons at such a low point.

"It's definitely a little surprising," Wagner said. "It's one of those teams that you can't take lightly. You can't look at their record and think that that's what it is, the way D.Q. is, the way that he gets those guys prepared."

Quinn said Carroll "meant more to me on the coaching side and has had the biggest impact on me than anyone in my career."

Carroll also has warm feelings for the former assistant he calls "Danny." He said the friendship, or Quinn's hot-seat status, can't get in the way of an important game for Seattle.

The Seahawks, coming off a loss to Baltimore, already trail San Francisco by two games in the NFC West.

"This is just one of those circumstances," Carroll said. "It certainly isn't going to affect our players. As long as it doesn't affect me and a couple of the guys that are friends and all that, it's fine."

Atlanta's lopsided 37-10 loss to the Los Angeles Rams last week may have been the low point of an ugly season. Quarterback Matt Ryan hobbled off the field with a sprained right ankle, which could force him to miss a start for the first time since 2009.

Running back Devonta Freeman was ejected for attempting to punch the much larger Aaron Donald, who at one point picked Freeman off the ground. The boxing mismatch was about as close as the game.

Veteran Matt Schaub, 38, took first-team snaps in practice this week. He would make his first start since 2015 with Baltimore if Ryan is held out.

Each team made trades on Tuesday. The Falcons sent wide receiver Mohamed Sanu to New England for a 2020 second-round pick. The Seahawks acquired safety Quandre Diggs from the Detroit Lions for a 2020 fifth-round pick.

Seattle continues to wait for its pass rush to make the kind of impact that was expected with Ziggy Ansah and Jadeveon Clowney added to the mix. The Seahawks have just 11 sacks on the season and only one in the past three games. This could be a week for Seattle to break out. The Falcons have given up 19 sacks, including five last week.

Sanu's exit could lead to a bigger role for Calvin Ridley as the Falcons' undisputed No. 2 wide receiver behind Julio Jones. "In the last 16 or 17 months you've seen that development and where he's headed," Quinn said. "It's that time for him to get more opportunities."

Ridley said he will miss Sanu.

"Mo meant a lot to me," Ridley said. "I learned a crazy amount from him, all about my game. He was the juice, the energy in our room."

Wagner needs just two tackles to move into first place on the team's all-time list, passing former safety Eugene Robinson. Wagner is third in the NFL with 69 combined tackles this season. The four-time first-team All-Pro has taken on an even larger role as the leader of Seattle's defense, even though he was unaware of how close he was to the record.

"It's kind of a testament to hard work," he said. "When you first enter the league, you kind of don't know what your career is going to look like, and I still feel like I have a lot left, but to be at the top of a list like that with all the players that played here would definitely be a blessing."