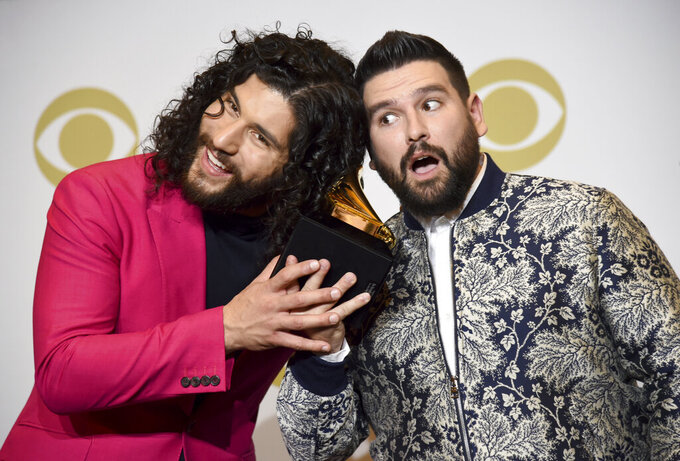 Dan + Shay pose in the press room with the award for best country duo/group performance for "Speechless" at the 62nd annual Grammy Awards at the Staples Center on Sunday, Jan. 26, 2020, in Los Angeles. (AP Photo/Chris Pizzello)

MIAMI (AP) — A noticeably relaxed Adam Levine took the stage with Maroon 5 for a pre-Super Bowl event in Miami on Saturday, telling the crowd he was relieved the pressures of the halftime show were behind the band.

“I’m just happy we can kind of kick back and hang out down the street and have fun, but still be somewhat away from the madness,” said Levine, whose band headlined last year’s Super Bowl halftime show in Atlanta.

The frontman asked the crowd which team they thought would win on Sunday but shrugged off answering his own question, saying he didn’t have a preference between the Kansas City Chiefs and the San Francisco 49ers. Drummer Matt Flynn, however, wore the jersey of San Francisco's George Kittle.

“Now that (expletive) is over. Now we’re loose and we can have a good time,” Levine said.

He clearly relished the no-pressure vibe, saying, “It's chill,” when he forgot a cue to grab his guitar during “Sugar,” even after admitting his mistake.

Dan + Shay, fresh off a Grammy win for “Speechless,” opened the show. Demi Lovato surprised the crowd, joining the country duo on the ballad.

Maroon 5 rocked through a series of hits during a high-energy, 90-minute set, including “Payphone,” “This Love,” “Moves Like Jagger” and “Animal,” which he played with a pink Hello Kitty guitar.

At the start of the show at the Miami Heat's home arena, Levine carried out Kobe Bryant’s Los Angeles Lakers jersey. He later opened the encore set with an emotional rendition of “Memories,” which he dedicated to Bryant, who was among nine people killed in a helicopter crash Jan. 26.

This year's pre-Super Bowl events have been suffused with grief and tributes to the basketball great in the aftermath of the crash, including during the Super Bowl media night Jan. 27 and former teammate Shaquille O'Neal's carnival-themed event Friday.

“I don’t know if I’ll make it through this one with my emotions intact. If you could sing with us it would make a huge,” Levine said, before stopping as the crowd erupted into chants of “Kobe.”

Levine clutched his microphone and hung his head low, saying one of his goals this year was to “love more and live more” and encouraging the audience to do the same.

The rocker wore a Guns N' Roses muscle tank for most of the show, which was part of the Bud Light Super Bowl Music Fest. Gun N' Roses headlined a performance also at the American Airlines Arena the night before. The series opened Thursday, during which Miami’s own DJ Khaled brought out several surprise guests including Rick Ross, 2 Chain and Migos. Meek Mill and DaBaby opened that show.