Analysis: Bet the under; NFL pendulum has swung to defense 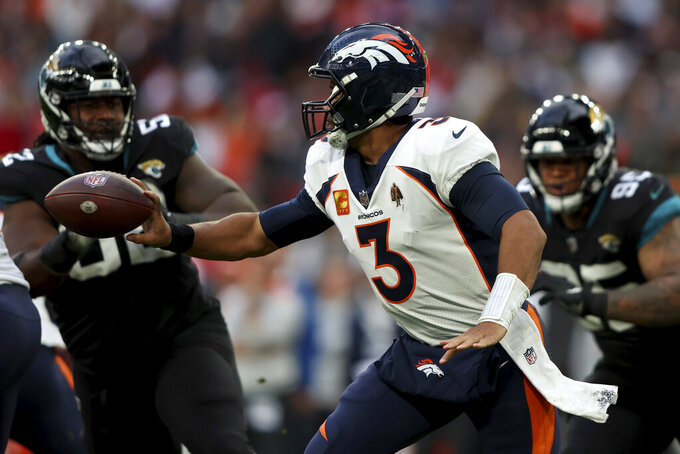 Bet the under when it comes to point totals in the NFL these days.

That might as well be the league's new mantra with the pendumlum finally swinging back to defense, smacking the likes of Aaron Rodgers, Matthew Stafford, Tom Brady and Russell Wilson along the way.

All of those Super Bowl-winning quarterbacks thrived in a golden age of explosive offenses and high-scoring weekends that produced record-shattering careers and skyrocketing salaries.

Scoring is down this year, and the league's QB royalty has been especially hard hit, suffering through the league's sudden shift to stingier defenses that dare teams to dink and dunk it downfield without making a fatal mistake.

Credit mostly the “shell” defenses popularized by former Broncos head coach Vic Fangio, who must be smirking as he watches from afar what he's wrought on the game that dumped him in favor of the latest young offensive-minded whiz kid — how's that working out, Denver? — but held on tightly to the old fogy's philosophies, especially in the red zone.

The scheme drops seven defenders into coverage with two safeties deep, curtailing some of the biggest plays that quarterbacks have enjoyed for decades as the rule book, fantasy leagues, broadcast networks and sportsbooks all favored high-scoring games.

The new defensive domination is on display every weekend across the league, where a paucity of points has become the norm in so many games.

Brady was scowling on the sideline and staring at his first four-game losing streak in two decades Sunday when the Rams suddenly got conservative on both offense and defense, allowing the seven-time Super Bowl winner to show he has at least a little bit of magic left in that 45-year-old right arm.

On the day he became the first quarterback to ever throw for 100,000 yards in his career, it took Brady until his 58th pass in a matchup of the last two Super Bowl champions to finally find the end zone. That was good enough for the Buccaneers to beat Stafford and the reeling Rams, who have already matched last year's loss total when they went 15-5 and won it all.

Rodgers is wallowing in the first five-game losing streak of his career, and he was asked Sunday following the Packers' 15-9 loss at Detroit if he regretted not retiring after last season given his miserable appearance on the sideline.

“I think that's an exaggeration,” Rodgers retorted, arguing that “frustration and miserability are two different emotions.”

“So, when I decided to come back, I was all in,” Rodgers said. "I don't make decisions and then hindsight 20/20, you know, have regrets about big decisions like that.”

This line of questioning came a week after Broncos GM George Paton said he had zero regrets about signing Wilson to a $245 million extension before the nine-time Pro Bowl QB had taken a single snap in Denver.

Wilson, who also cost the Broncos three players and four premium draft picks, has just six TD passes in seven games and Denver has a steep climb to end its five-year string of losing records and six-year playoff drought.

Instead, there's been a lot of distress in Denver, although all that Broncos fans had to do last weekend was look around the league to realize they're not the only ones suffering through a quarterback quandary.

Wilson couldn't even escape the heat during the Broncos' bye after he tweeted, “Keep working” just before TMZ dropped photos of him sunning poolside in Cabo with his celebrity wife Ciara, a stark contrast that was dissected and debated incessantly on the airwaves and social media.

Even Josh Allen and Patrick Mahomes, the two quarterbacks who had been immune to this paucity of points in 2022, struggled to score Sunday.

It took Mahomes a whopping 68 passes to push the Chiefs past the Titans and rookie QB Malik Willis with a 20-17 escape in overtime.

Allen was held in check by the Jets and was outplayed by Zach Wilson in the Bills' 20-17 loss at the Meadowlands, where he failed to throw a touchdown pass for the first time this season and was sacked a season-high five times.

Brady was elated to celebrate his first win in almost a month, and unlike Wilson, Stafford and Rodgers, his team isn't buried in the standings after floundering through the first half of the season.

The Bucs are tied with the Falcons atop the middling NFC South at 4-5.

Allen and the Bills face a little more heat, and not just from Mahomes and the Chiefs in their quest to get homefield advantage in the AFC playoffs.

The Bills dropped to 6-2 overall and their once-clear control of the AFC East has diminished. The Jets and Dolphins are just a half-game behind at 6-3, with the Patriots at 5-4.

“We hate losing in the division,” Bills receiver Stefon Diggs said. “We've got to get back to being us."

That is a sentiment that's echoing across the league from stymied offensives finding it harder and harder to light up scoreboards.