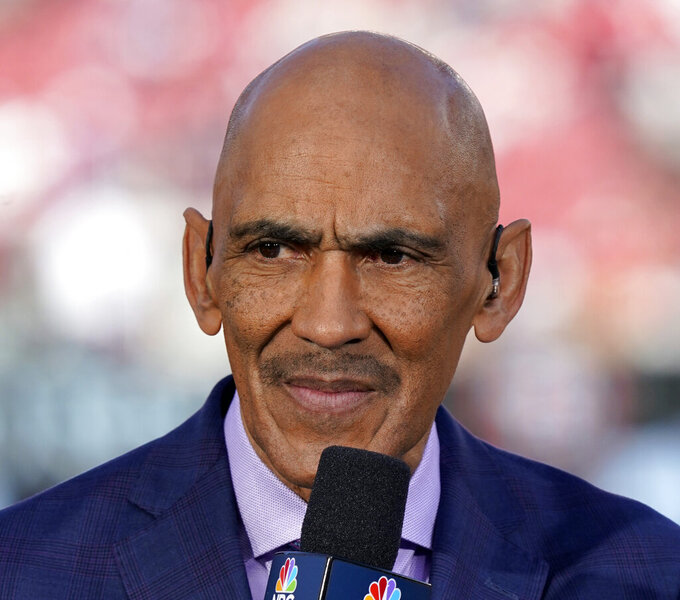 FILE - Tony Dungy looks on before an NFL divisional playoff football game between the San Francisco 49ers and the Minnesota Vikings, Saturday, Jan. 11, 2020, in Santa Clara, Calif. Hall of Fame coach Dungy learned long ago the need to know how to handle credit and blame. (AP Photo/Tony Avelar, File)

Sean Payton receives loud plaudits for guiding his team, with a third-string quarterback, to victory over powerful Tampa Bay.

Matt LaFleur draws praise when his Packers, minus their top two receivers (but still with Aaron Rodgers at quarterback) and defensive coordinator, travel to Arizona and knock off the then-unbeaten Cardinals.

Urban Meyer stays behind in Ohio after a Jaguars loss, then embarrasses himself in a video.

Credit and blame. For NFL coaches, it comes with the territory.

“You are setting the tone and the stage, and it is probably deserved and you want it that way,” Hall of Fame coach Tony Dungy says of the ups and downs of being the man in the spotlight. “The captain goes down with the ship.

“If you are winning, always you will get credit, even though you don’t deserve as much — that goes for blame or credit. There is not a whole lot you can do about it. You know it is not true, you are not the one solely responsible for it. You set the tone and the course, but if you have great assistant coaches and great players, you want them to get accolades.”

Dungy certainly had that as he rebuilt Tampa Bay, which won a Super Bowl under Jon Gruden the year after Dungy was fired. And he had it with the Colts, with whom he won a Super Bowl. Such standout assistants as Herman Edwards, Mike Tomlin and Jim Caldwell come from the Dungy coaching tree.

Bill Cowher, who joined Dungy in the Pro Football Hall of Fame this year and won a Super Bowl with the Steelers, echoes those sentiments. Success only is achieved as a team effort. So is failure.

But Cowher sees the head coach as a hands-on CEO with a multitude of duties.

Cowher, who retired after the 2006 season and is an analyst for CBS, insists head coaches must be aware of what is being said and written. And what is going on outside the team facility.

“Yes, a coach has to adapt to injuries and to the media — you had better be proactive to it before it gets a life of its own,” he says. “It is very important to react to what is being said.”

Any coach will insist that distractions are destructive for a team. Cowher stresses the need to not ignore the noise. Indeed, he believes a head coach needs someone to monitor that outside noise.

“You can’t assume everyone is seeing what is on social media, and you can’t keep up with it all,” he says. “You have to have someone on top of all the social media and make sure to communicate with your team every day, making them aware of what is going on around you. Messaging is important with such a diverse group of people. You can’t communicate enough with them just about life and the choices and the consequences that go with the choices.

"Keep them up to date with the status of what is going on around the league and let them understand that need to communicate.”

Payton gets recognized for his offensive acumen, just as Tomlin has been for his defensive coaching skills. John Harbaugh is a former special teams coordinator who has mastered pretty much all aspects of the job.

Dungy doesn't believe a head coach’s background on a specific side of the ball plays into the way a team is coached. Considering there are 17 head coaches with offensive backgrounds, 12 from defense and three from special teams, that seems logical.

“There doesn’t need to be a trend,” says Dungy, now an analyst for NBC. "Head coach is all about leadership and focusing in. It doesn’t matter what side of the ball you come from. You learn from how you grew up in it and who you were coaching under. Marty Schottenheimer was involved in everything, offense and defense meetings. Denny Green was an offensive coach and he delegated. Brian Billick and I were there in Minnesota, and Denny would say, 'This is what we want and we have to attack, and now you go and do it.

"Everybody does it a little differently. Some guys have their hands in everything. I laugh at these owners who hire a coach because they say, 'I have a great quarterback and I have to have a coach who can get the most out of the quarterback. I hired Tom Moore, who is the best there is, as offensive coordinator.

“I don’t get hung up too much on that. To me, it is how is the head coach going to respond when things don't go well, or do go well?”

Yep. How he will handle the credit, and the blame.