Another tough day for Wilson, Jets in 26-0 loss to Broncos 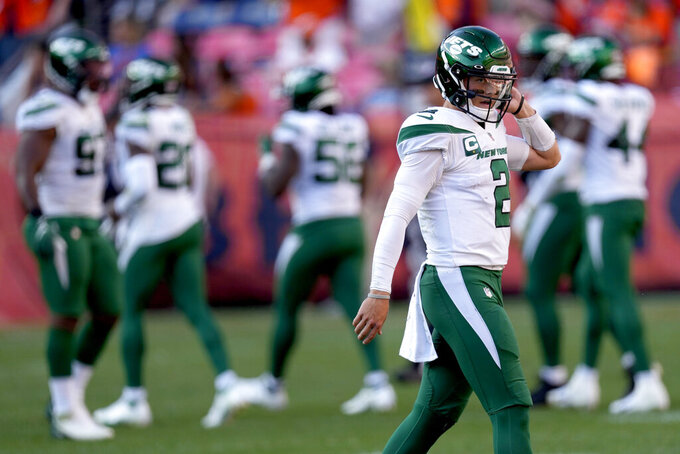 New York Jets quarterback Zach Wilson (2) walks to his bench during the second half of an NFL football game against the Denver Broncos, Sunday, Sept. 26, 2021, in Denver. The Broncos won 26-0. (AP Photo/David Zalubowski)

DENVER (AP) — The scratch on Zach Wilson's left hand — the one he got from taking yet another hit — was no big deal, he maintained. It will quickly mend.

Same with a bruised ego after another frustrating performance.

The New York Jets rookie quarterback knows these lumps and hits just come with the territory as he learns the ropes in the NFL. This was another tough day for Wilson as he was sacked five times and threw two interceptions in a 26-0 loss to the Denver Broncos on Sunday.

The Jets (0-3) finished with just 162 total yards and had far more punts (six) than red zone visits (zero). They've now gone from scoring 14 points at Carolina in the season opener to six against New England last weekend to being blanked.

A step back? Wilson doesn't see it that way.

“It may be hard for people to see that, but we’re learning a lot from those games," said Wilson, who finished 19 of 35 for 160 yards and a QB rating of 42.6. “People are going to hate. It is what it is. We’re just going to keep that confidence. Get in there Monday and just be hungry and keep trying to get that win.”

Wilson realized growing pains were going to be part of the equation after being selected with the No. 2 overall pick. Still, it's been an eye-opening experience after his success at BYU.

“It’s making me stronger,” said Wilson, who's now thrown seven interceptions and been sacked 15 times. "I didn’t experience this in college. The crazy thing is I knew it was going to be like this. You go into a program that you know has all new guys coming in, it’s a process and all of us want to get better and give everything we have.

“People can hate all they want. But what’s feeling sorry going to do?”

Part of the problem was that Wilson just didn't have time to throw, with all the pressure from Von Miller, Alexander Johnson and the rest of Denver's swarming defense. Another part was Wilson may have been waiting too long in the pocket for a receiver to break free.

It's a fine line.

"He’s got to learn this is the NFL and you have to get the ball out," Jets right guard Greg Van Roten said. “But we have to protect him better. It start with us up front.”

For the most part, the New York defense did its job against Teddy Bridgewater and the Broncos offense. The Jets forced the Broncos (3-0) to kick four field goals.

Then again, they knew they'd have to hold things down — until Wilson and the offense found their footing.

Simply part of the learning curve.

The struggles on offense Sunday had far more to do with mistakes by the Jets, receiver Corey Davis argued, than defensive schemes shown by the Broncos.

“We’re a good team. We have a lot of talent,” said Davis, who had five catches for 41 yards. “We have to put it together. ... Zero points? We have too much talent for that.”

Davis isn't worried about this being a ding to Wilson's swagger.

No alarm bells being sounded from the coaching staff, either.

“I wouldn’t call it regression,” Jets coach Robert Saleh said. “This has been a rough indoctrination for our quarterback and our offense. But at the same time you do expect plays to be made and progression to be made. ... We play hard, but playing hard is not good enough sometimes.”