AP source: Browns' Phillips (biceps) could miss most of year 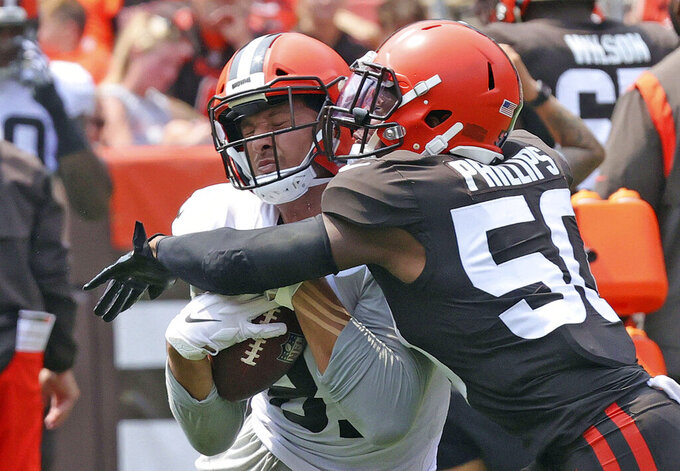 BEREA, Ohio (AP) — Browns linebacker Jacob Phillips tore his biceps and could miss most of this season, a person familiar with his situation told The Associated Press on Friday.

Phillips was hurt Thursday during the first of two joint practices against the New York Giants. He could return later this season, said the person, speaking on condition of anonymity because the team has not disclosed his medical status.

For Phillips to come back, the Browns will have to keep him on their initial 53-man roster when final cuts are made Aug. 31, and then place him on injured reserve.

The Browns expected Phillips, a third-round pick in 2020, to be in their rotation and have a large role in their revamped defense. His loss leaves the Browns extremely thin at linebacker and it’s likely they’ll look outside their roster for help.

Linebacker Sione Takitaki injured his hamstring Thursday, and the team has not provided an update.

Rookie linebacker Tony Fields II hasn't practiced this summer because of a foot injury, and Mack Wilson has been kept out of team drills this week after spraining his shoulder in the exhibition opener against Jacksonville.

Phillips played in nine games and made three starts as a rookie last season.

The Browns and Giants will have another practice Friday before playing Sunday at FirstEnergy Stadium. Both teams are expected to rest many starters.