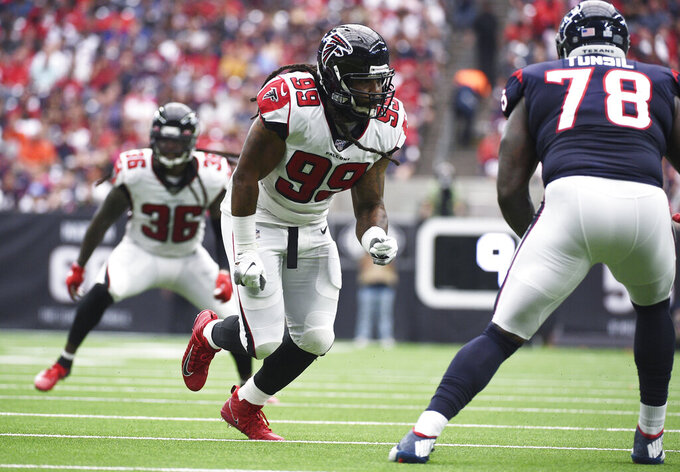 FILE - In this Oct. 6, 2019, file photo, Atlanta Falcons defensive end Adrian Clayborn (99) rushes against the Houston Texans during the first half of an NFL football game in Houston. The Cleveland Browns plan to sign veteran free agent Clayborn to a two-year, $6 million contract, a person familiar with the negotiations told The Associated Press on Tuesday, March 31, 2020. (AP Photo/Eric Christian Smith, File)

Clayborn, who spent last season with the Atlanta Falcons, has agreed to terms on a deal that includes another $1 million in incentives, said the person who spoke on condition of anonymity because he must still pass a physical.

The 31-year-old had four sacks in 15 games last season with the Falcons. Clayborn has also played for New England and Tampa Bay. He won a Super Bowl title with the Patriots in 2018.

Clayborn had his best season in 2017 with Atlanta, recording a career-high 9 1/2 sacks.

Clayborn has 36 1/2 sacks in 52 starts since he was selected in the first round of the 2011 draft by the Buccaneers.