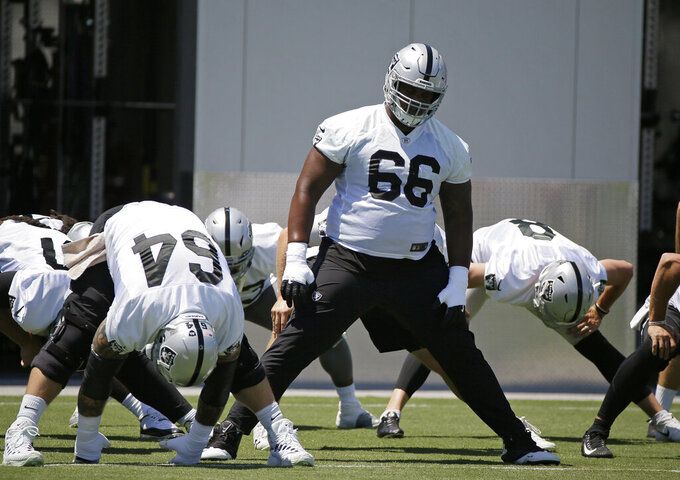 FILE - In this June 11, 2019, file photo, Oakland Raiders offensive guard Gabe Jackson (66) and teammates stretch during the NFL football team's minicamp in Alameda, Calif. The Raiders are concerned about the status of starting right guard Jackson after he injured his leg in a joint practice with the Los Angeles Rams. Jackson went down early in the session Thursday, Aug. 8, when someone rolled into his leg. Jackson was then taken off the field on a cart and owner Mark Davis went into the locker room shortly after that for almost 15 minutes. (AP Photo/Eric Risberg, File)

A person familiar with the diagnosis said Jackson hurt his MCL when someone rolled into his leg early in practice. The person spoke on condition of anonymity because the team hadn't released details of the injury. The diagnosis was first reported by The Athletic.

Jackson was taken off the field on a cart after the injury and owner Mark Davis went into the locker room shortly after that for almost 15 minutes.

Jackson, a third-round pick in 2014, is a key part of Oakland's offensive line and the team's longest-tenured player alongside quarterback Derek Carr and defensive tackle Justin Ellis. He received a five-year, $56 million extension in 2017 and is being counted on to be a big part of Carr's protection this season.

The Raiders already will be without starting left guard Richie Incognito for the first two regular-season games because of a suspension, and top backup Denzelle Good is expected to miss the start of the season after undergoing back surgery.

Jonathan Cooper is expected to start in Incognito's place to begin the season. Denver Kirkland and Jordan Devey split time in Jackson's place for the remainder of the practice.

With Jackson expected to miss at least the first four games, the Raiders could look to add more depth at the position.

"We'll have to put our heads together and take a look at where we're going if we need to," coach Jon Gruden said.

Before getting hurt, Jackson was involved in one of two scuffles that took place during a more heated joint practice than the first session between the teams on Wednesday.

Jackson got tangled up with Rams star defensive tackle Aaron Donald at one point, leading players on both teams to rush to the pile and Los Angeles coach Sean McVay to run over from the opposite field to make sure it didn't escalate.

"It's football," Donald said. "It's just practice, it's just how the emotions (are) some days. A little bit of pushing and shoving never hurt anybody. We're just getting after it."

There was another run-in shortly after that between the Rams defense and the Raiders offense before tempers calmed. The rest of practice went on without any incidents.

"What I loved was the fact that our guys were able to regather themselves, had our poise and composure about ourselves, in terms of being able to finish out practice," McVay said. "I thought credit to both teams to be able to do that because you see when things get chippy early on, sometimes you end up having to cancel those practices. We definitely didn't want to lose that practice opportunity and to the players' credit, we didn't."

After the two practice sessions, the teams will play the exhibition opener in Oakland on Saturday night with few starters expected to play. McVay said he could play his two new starting offensive linemen, center Brian Allen and tackle Joe Noteboom, for a couple of series. Linebacker Micah Kiser and defensive tackle Sebastian Joseph-Day are the two defensive starters expected to play.

Gruden wasn't sure which starters would play for Oakland but said most were unlikely to get much time, if any, on Saturday. One player out for sure for the Raiders is star receiver Antonio Brown, who has not yet taken part in a full practice because of a foot ailment.

ESPN reported Wednesday that Brown has been dealing with a case of frostbite suffered while getting cryotherapy treatment in France last month.

Gruden said Brown is still gathering information about his injury but wouldn't offer any details.