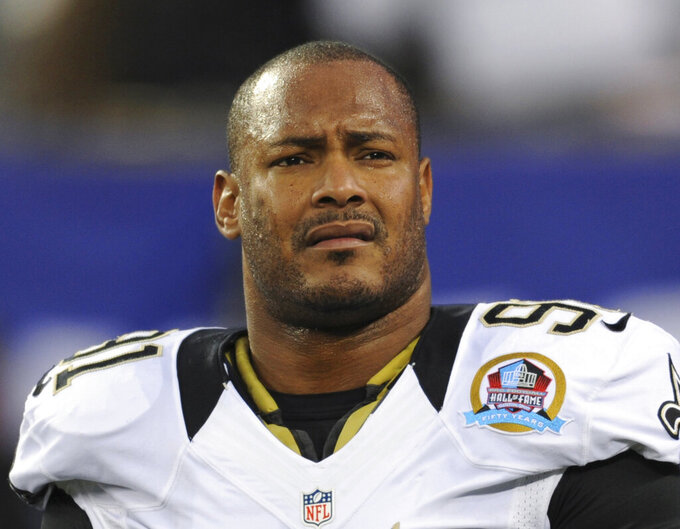 FILE - In this Dec. 9, 2012, file photo, New Orleans Saints defensive end Will Smith appears before an NFL football game against the New York Giants in East Rutherford, N.J. A new retrial date of April 4 was set Wednesday, Oct. 6, 2021, for the man who killed ex-NFL star Will Smith in 2016 following a confrontation over a traffic crash in New Orleans. Cardell Hayes remains free on bond after his earlier manslaughter conviction in Smith’s death was overturned because the trial jury verdict was not unanimous. (AP Photo/Bill Kostroun, File)

NEW ORLEANS (AP) — A new retrial date of April 4 was set Wednesday for the man who killed ex-NFL star Will Smith in 2016 following a confrontation over a traffic crash in New Orleans.

Cardell Hayes remains free on bond after his earlier manslaughter conviction in Smith’s death was overturned because the trial jury verdict was not unanimous. He has pleaded not guilty and insisted at his earlier trial that he shot Smith in self-defense.

A new trial had been set for this month. However, Assistant District Attorney Matthew Derbes expressed concerns over whether a jury pool that represents the demographic makeup of the New Orleans area could be assembled given complications arising from the coronavirus pandemic and the New Orleans area’s recovery from Hurricane Ida.

Derbes and defense attorney John Fuller jointly asked for a trial delay and state District Judge Camille Buras granted it. Derbes also said prosecutors plan to file a change of venue motion that could result in the proceedings being moved from New Orleans. He cited publicity surrounding Hayes' arrest, the leadup to the 2016 trial and the trial itself. Fuller did not comment on that issue.

Hayes maintained that he shot Smith in self-defense after the two argued following a traffic crash. But Hayes, who testified in his own defense, was the only witness at his trial to say Smith held a gun or fired it. A handgun was found loaded but unused in Smith’s car.

Hayes, now 34, is the former owner of a tow truck business who had played some semi-pro football. He is the father of a young son. He had been serving a 25-year prison sentence for manslaughter in Smith’s shooting and attempted manslaughter for wounding Smith’s wife. But he was granted bail after the jury's 10-2 verdicts were later ruled unconstitutional. He has been confined to his home, allowed to leave under very limited circumstances including to attend church or keep attorney appointments. Buras rejected a request to alter the terms of his release to allow him to take a job, saying she wanted to get more information before deciding.

Smith, a 34-year-old father of three, was a defensive leader on the Saints team that lifted spirits in New Orleans after Hurricane Katrina devastated the city in 2005. He helped carry the team to a winning season in 2006 and a Super Bowl victory in 2010.