Barring another draft surprise, Cowboys could start with OL 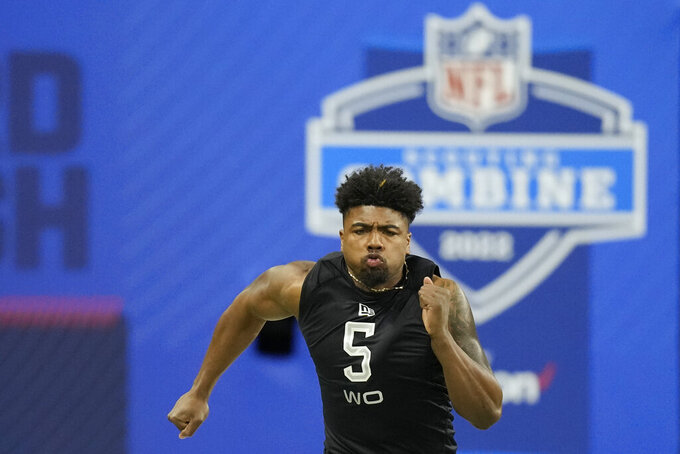 FILE - Arkansas wide receiver Treylon Burks runs the 40-yard dash at the NFL football scouting combine, Thursday, March 3, 2022, in Indianapolis. The Dallas Cowboys could be looking at their offensive line with their first pick in the NFL draft at No. 24. (AP Photo/Charlie Neibergall)

Jerry Jones likes the idea of the Dallas Cowboys drafting an offensive lineman since the owner and general manager knows that's one area his club hasn't addressed its personnel losses in the offseason.

“Famous last words,” Jones said. “We'll get one unless Lamb or Parsons is there.”

Indeed, the past two drafts didn't go as planned for the Cowboys, who were shocked two years ago when receiver CeeDee Lamb was still there at No. 17.

Last year, they had to “settle” for linebacker Micah Parsons, even trading back two spots to 12th for the eventual NFL Defensive Rookie of the Year when the cornerbacks they wanted were gone.

The difference this year is the Cowboys, after winning the NFC East, are drafting lower than recent years at No. 24 in the first round. And that's low enough for Jones not to dismiss the idea of moving up Thursday night.

“I would trade up in this draft,” Jones said. “As much as you can say about it, until you see what’s there and who is on the other line, but yeah, I would trade up since we’re down as low as we are in those first two or three rounds.”

Executive vice president of personnel Stephen Jones suggested otherwise, saying on his radio show a little more than a week before the draft that its depth because of the extra season created by COVID-19 makes staying put attractive.

“You're going one player for two, so it's got to be worth it,” Stephen Jones said on his radio show. “A lot of players stayed in school and made the most of it and have gotten themselves from a late or undraftable player to very much a draftable player.”

Other than five-time All-Pro right guard Zack Martin, the Cowboys are the most unsettled they've been in years with what was once one of the NFL's most dominant lines.

Age and injuries could be catching up with left tackle Tyron Smith, Tyler Biadasz may not be the long-term solution at center and undrafted third-year pro Terence Steele is about to replace Collins again, something he has already done.

Stephen Jones said the Cowboys were targeting the offensive line in free agency. They still haven't made a move even with Jones suggesting they wanted to sign a veteran “so we’re not feeling pushed to go too high early and often if the right player’s not there,” in the draft.

The Cowboys also unloaded No. 1 receiver Amari Cooper to save more money under the salary cap. But they were confident enough in Michael Gallup's return from a torn knee ligament to sign the fifth-year receiver to a $62.5 million, five-year contract.

“I think they’re comfortable with the Washington, Gallup and Lamb combination where they can be patient,” said SiriusXM draft analyst Mark Dominik, a former Tampa Bay general manager. “And I think Dallas should be patient. Even though I know the Joneses like to make a splash, I think they might be even more inclined to trade back.”

ABOUT THAT PASS RUSH

The most troubling development of the offseason for Dallas was unexpectedly losing defensive end Randy Gregory to Denver in free agency. The Cowboys were confident in keeping him, and had a deal before Gregory's agent balked over language in the contract about guaranteed money for a player who has been suspended four times.

DeMarcus Lawrence is coming back on a reworked contract, and Parsons' pass-rushing ability gives Dallas the kind of versatile defensive playmaker it hasn't had in a long time.

Plus, the previous time the Cowboys drafted in the 20s was 2017, when they took defensive end Taco Charlton at No. 28. He could be considered the club's worst first-round pick since 2006.

The Cowboys had the most defensive-minded draft of the Jones era, which started in 1989, with eight choices on that side of the ball last year. The focus could return to offense with the losses of two linemen, another key receiver in Cedrick Wilson and tight end Blake Jarwin, who has a career-threatening hip issue and was released.

“You never say we’re only focused on offense,” Stephen Jones said. “If there’s a defensive guy sitting there and you’ve got him rated a lot higher than the other guys, that’s where we’ve had our success.”