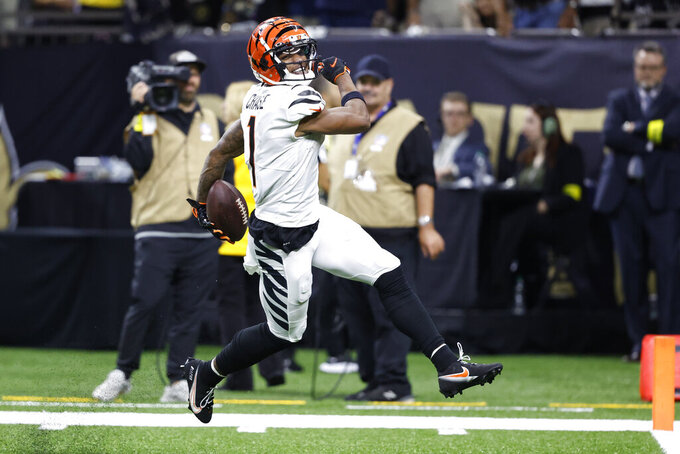 Cincinnati Bengals wide receiver Ja'Marr Chase (1) smiles as he runs for a touchdown against the New Orleans Saints during the second half of an NFL football game in New Orleans, Sunday, Oct. 16, 2022. (AP Photo/Butch Dill)

OPENING LINE: Bengals by 6 1/2, according to FanDuel Sportsbook.

TURNOVER DIFFERENTIAL: Falcons plus-2, Bengals even.

FALCONS PLAYER TO WATCH: S Jaylinn Hawkins had a huge game against the 49ers on Sunday. Hawkins come up with one of two interceptions by the Falcons and also alertly fell on a loose ball in the end zone for a touchdown that gave Atlanta an early 14-0 lead.

BENGALS PLAYER TO WATCH: WR Ja'Marr Chase. The reigning Offensive Rookie of the Year had his best game of the season last week against the Saints with seven catches for 132 yards and two touchdowns. One of the TD receptions covered 60 yards, his longest of the season.

KEY MATCHUP: The Bengals defense has struggled to stop the run with nose tackle D.J. Reader sidelined with an injury. That should fit the game plan for the Falcons, who have been productive running the ball even with Cordarrelle Patterson on injured reserve. Caleb Hunley and rookie Tyler Allgeier combined for 110 yards — with Mariota adding 50 on just six carries — against the 49ers last week. Atlanta ran the ball a season-high 40 times.

KEY INJURIES: Atlanta starting CB A.J. Terrell pulled up with a hamstring injury early in the third quarter last week and has been limited in practice this week. ... Bengals LB Logan Wilson (shoulder) is day to day.

SERIES NOTES: The Falcons have lost the past two meetings (2014 and '18) after winning three in a row. The longest winning streak in the series is five by the Bengals stretching from 1975 to 1984. The most lopsided victory was a 37-7 win by the Bengals in 1978.

STATS AND STUFF: Falcons rookie RB Tyler Allgeier has rushed for 235 yards on 54 carries. He needs 65 yards to become the third-fastest player to reach 300 yards in franchise history, behind William Andrews in 1979 and Bubba Bean in 1976. ... QB Marcus Mariota ranks second among NFL quarterbacks with three rushing touchdowns. ... Rookie Drake London leads the Falcons with 25 receptions and 306 receiving yards. ... The Falcons have scored touchdowns on 66.7% of red zone possessions, the fifth-best mark in the league. In the past four weeks, Atlanta has TDs in 10 of 13 red zone possessions (76.9%). ... Rookie LB Troy Andersen is tied for the team lead with 12 total tackles in his first career start last week. ... LB Rashaan Evans also had 12 tackles with his second career forced fumble. ... The Falcons rank third in the NFL with 165.2 yards rushing per game and rank ninth while allowing an average of 104 yards on the ground. ... Atlanta’s 991 rushing yards are the team’s most through six games since 2006. ... The Bengals play a home game for the first time in nearly a month. ... WR Tyler Boyd is the only current Bengals player with offensive stats against Atlanta. He had 11 receptions for 100 yards against the Falcons in the Bengals’ 37-36 win in 2018. ... The Bengals have scored on 15 of 21 trips to the red zone — 12 touchdowns and three field goals. ... Chase, a native of suburban New Orleans, celebrated his homecoming last week with his best game of the season. The second-year player caught two TDs, highlighted by a 60-yard catch and run late that turned out to be the game-winning score against the Saints. ... Bengals quarterback Joe Burrow got his second 300-yard passing game of the season last week. He hadn't had one since the Week 1 loss to Pittsburgh.

FANTASY TIP: Chase appears to be regaining the form that helped carry the Bengals last season to their first Super Bowl berth in 33 years. Last week he caught two TD passes — half of his season total.