Bengals visit Ravens with AFC North lead on the line 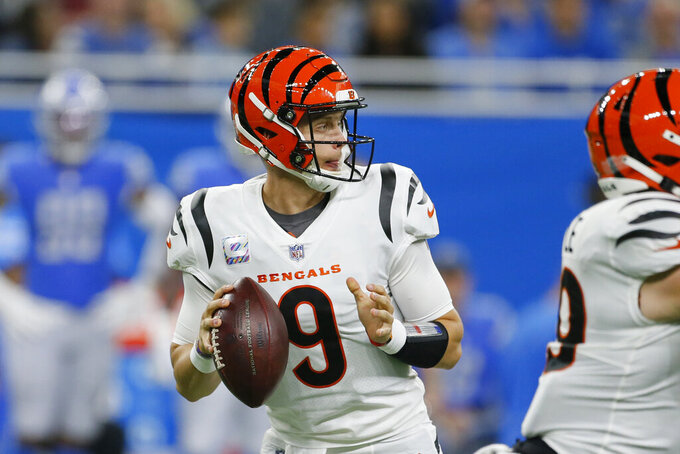 The Cincinnati Bengals have waited a while for a game like this.

There's no point in downplaying it.

“There’s something to this game," tight end C.J. Uzomah said. "It is a huge game, and we’re not treating it like a normal game.”

After five straight losing seasons, the Bengals have a chance to move into a tie for first atop the AFC North if they can win at division-leading Baltimore on Sunday.

Yes, the season is less than half over, but for a Cincinnati team with young standouts at quarterback and receiver, this is a chance for the Bengals to see how they measure up against the team with the conference's best record.

And a team that has dominated the Bengals of late.

The Ravens have won five in a row in this series, and the past three haven't been close. Baltimore beat Cincinnati 49-13 in their second meeting of 2019, then swept the Bengals last season without allowing a touchdown. The Ravens won 27-3 and 38-3, and in the most recent matchup between the teams, Baltimore rushed for a franchise-record 404 yards.

This season's Ravens have won five in a row after opening with a loss at Las Vegas. A win this weekend would give coach John Harbaugh's team a two-game cushion at the top of the division.

A loss, however, would give the Ravens some surprising company in first place.

This is Baltimore's first division game of the season. The Bengals already have a win at Pittsburgh.

Much of the attention on Cincinnati is focused on second-year quarterback Joe Burrow and rookie receiver Ja'Marr Chase, both of whom went to LSU. Chase is fourth in the NFL with 553 yards receiving.

“It’s actually been really surprising. He’s really made the NFL look pretty easy,” Ravens cornerback Marlon Humphrey said. “It seems like being that Joe and him played in college together, it’s not really a new relationship. So, it seems like they’re like a fifth-year tandem, that they’ve been doing it for a while.”

The Bengals (4-2) have had success on the other side of the ball as well. Cincinnati has not allowed more than 25 points in a game this season.

The Ravens have eclipsed that mark four times, including last weekend in a 34-6 rout of the Chargers that gave Baltimore a marquee win over another AFC team that was off to a good start.

The Bengals have already equaled their win total for all of last season. They finished 4-11-1 in 2020 after slogging to a 2-14 record in coach Zac Taylor’s first year in 2019.

“We’re playing well on the road the last two weeks,” he said. “We’ve responded well to adversity so far. And so again, those are all things that are going to serve us well the rest of the season. You know, I’m always going to sit here and say there’s things we can improve, but I think our guys are on the right trajectory right now, and that’s encouraging to see.”

Injuries have been a constant backdrop for the Ravens, ever since they lost running backs J.K. Dobbins and Gus Edwards before the season even began. This week, they put offensive lineman Ronnie Stanley (ankle) on injured reserve. He hadn't played since the opener.

Taylor said Burrow is better than he was when he was beaten 27-3 by the Ravens in Week 5 last season. The rookie threw an interception and was sacked seven times by Baltimore.

“I think Joe has grown tremendously,” Taylor said. “He’s been exposed to a lot more defenses over the course of the year, just having played and watched more tape over this last season.”

Burrow is completing more than 70% of his passes and has at least two touchdown passes in each of the Bengals’ first six games.

The Ravens are 5-1 for the fourth time in franchise history, but they've never started 6-1. Baltimore was 5-1 as recently as last season, then dropped four of its next five games.

With Watkins and receiver Rashod Bateman both having missed time, the Ravens have leaned heavil y on tight end Mark Andrews. The 6-foot-5 Andrews has 468 yards receiving, tied with Kansas City's Travis Kelce for the top mark among NFL tight ends.