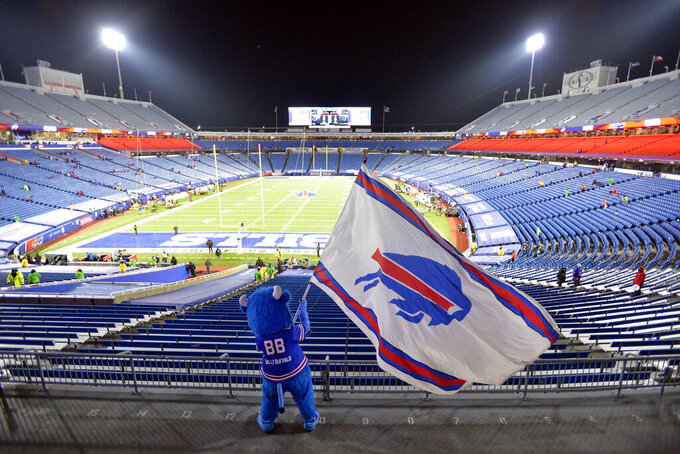 FILE - Buffalo Bills fans leave Bills Stadium as a mascot waves a flag after an NFL divisional round football game against the Baltimore Ravens, Jan. 16, 2021, in Orchard Park, N.Y. State and county taxpayers will be asked to commit $850 million in public funds toward construction of the Buffalo Bills' new stadium, which has a state-projected price tag of $1.35 billion, a person familiar with the the plan told The Associated Press on Monday, March 28, 2022. (AP Photo/Adrian Kraus, File)

ALBANY, N.Y. (AP) — New York looks poised to become the next place to give a huge subsidy to a professional sports arena, despite questions about whether the civic pride of having a team justifies giving so much public money to a private business.

Gov. Kathy Hochul proposed a deal Monday that would give the Buffalo Bills $850 million in public funds to help the team build a new $1.4 billion stadium. In return, the Bills would agree to play in Buffalo's suburbs for at least 30 years.

The deal, which still needs approval from the state legislature, immediately renewed a debate about government's role in supporting privately-owned businesses.

Just three years ago, a deal to that would have given Amazon nearly $3 billion in tax and other incentives to build a headquarters for 25,000 workers in New York City fell apart amid a backlash from activists and progressive politicians who called it a giant corporate giveaway.

Some similar criticism rolled in over the Bills deal.

State Assemblymember Ron T. Kim, a Queens Democrat, used a curse word on Twitter to refer to the proposal. Sochie Nnaemeka, the director of the influential Working Families Party, called the deal “a continuation of trickle-down economic development schemes that have enriched wealthy investors on the backs of Black, brown, and working class communities.”

U.S. Rep. Thomas Suozzi, a Long Island Democrat running against Hochul, said he supported the idea of a new Bills stadium, but that it could be built without having New Yorkers “fork over their tax dollars to help a billionaire donor get even richer.”

A few barbs came from the right, too.

“I like the Bills as much as anyone but this is outrageous,” said Republican state Sen. Mike Martucci, who represents a district in the Catskill Mountains and Hudson Valley. “Republicans are often criticized for being buddies with billionaires. What would you call this?”

The deal negotiated by the Hochul administration would require the Bills’ owners, billionaires Terry and Kim Pegula, whose fortune is linked to natural gas fracking, to put up around 39% of the construction cost.

New York state taxpayers would pay $600 million, with Erie County, where the team is located, spending another $250 million.

She also highlighted the intangible benefits of having pro sports in Buffalo — a rust belt city that the state has already spent hundreds of millions of dollars reviving following the decline of U.S. manufacturing in the 1970s and 80s.

It “goes to our identity,” she told reporters Monday.

“We are known globally for being the home of the Buffalo Bills, and it’s part of our local psyche, and it makes us so proud,” Hochul said, adding, “that’s not quantifiable.”

That, probably more than anything else, is what has prompted numerous cities and states to put up big bucks for sports arena projects, either to keep teams from moving or luring them away from elsewhere.

Nevada poured $750 million into a new stadium to get the NFL's Raiders to move from Oakland last year. In Atlanta, the Falcons’ owner said he’s expecting to get as much as $700 million in public dollars from future tax revenues over coming decades as part of the deal struck to build the $1.5 billion Mercedes-Benz Stadium.

A number of cities and states have poured public money into arena deals, even to replace venues that are still relatively new.

A more comparable market to Buffalo is Jacksonville, Florida, where the Jaguars TIAA Bank Field was built on part of the former Gator Bowl Stadium in 1995 at a cost of $134 million (about $368 million in today's dollars), with 45% of that money coming from the city. Last year, Jaguars owner Shad Khan unveiled a $450 million plan to redevelop the area around the stadium, with taxpayers providing $233 million in investments and incentives.

Public officials often argue that they amount of tax dollars spent will be eclipsed be revenue brought in by a team, including taxes on player salaries, jobs created and tourism dollars spent.

That argument doesn’t carry much weight with economists, who say decades of research shows sport stadiums don’t do much to boost a local economy.

“This is one of those topics where you have almost universal agreement among economists: that stadiums really do not bring a significant financial benefit to the cities that house them,” said Michael Leeds, an economics professor at Temple University.

Sports teams do bring in out-of-town fans who patronize local hotels and restaurants, but the jobs created and tax revenue generated rarely come close to the rosy projections, experts say.

“We don’t want to kid ourselves,” Leeds said. “What they do bring is very limited geographically and very limited financially.”

Buffalo, the NFL’s second smallest market, does draw some out-of-state fans, with southern Ontario, Canada, making up more than 15% of its season-ticket base.

Government handouts to big corporations, of course, aren't just for sports. Automakers, aerospace manufacturers, tech companies and others have gotten billions of dollars in tax breaks from U.S. states. New York state pledged more money to help build a Tesla solar panel factory outside Buffalo — $750 million — than it is giving to the Bills.

“If you go back 25 years, you’ll see that 70% of the funding was basically public,” Zimbalist said.

The leaders of New York's Assembly and Senate, whose approval is needed for public financing on the Bills deal, have so far been silent, but Hochul looked to have gotten support from at least some top Democrats.

Assembly Majority Leader Crystal Peoples-Stokes praised the deal and called it a “once in a generation opportunity for advancement.”

Pegula Sports and Entertainment executive Ron Raccuia, who represented the Bills in negotiations with the state and county, called the deal a “good investment for everyone.”

“We are very thankful that the governor and county executive showed the leadership that they did. But I think people need to realize that we contribute a lot from a tax standpoint. Every dollar that goes into this stadium will be paid back,” he said.

John Kaehny, executive director of the government-reform group Reinvent Albany, said that while some downstate progressives were opposed to public funding for a Bills stadium as “a gross corporate handout,” they might lack the political traction to block the deal.