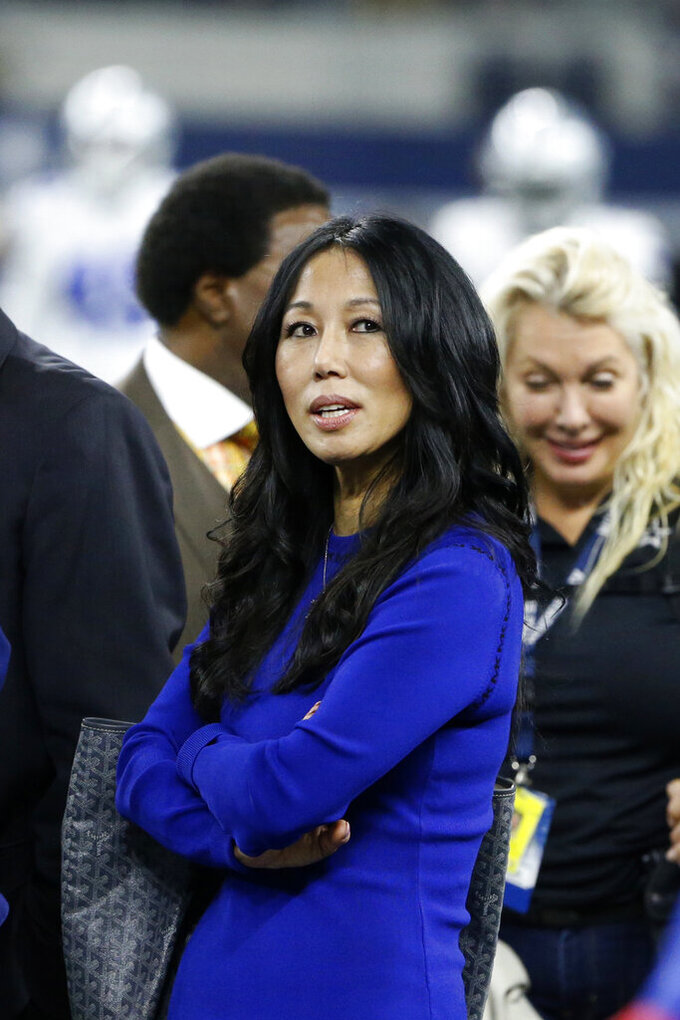 FILE - Buffalo Bills co-owner Kim Pegula looks on during warmups before an NFL football game against the Dallas Cowboys in Arlington, Texas, Thursday, Nov. 28, 2019. Buffalo Bills and Sabres co-owner Kim Pegula is receiving medical care from what her family on Tuesday, June 14, 2022, described as being “some unexpected health issues.” (AP Photo/Michael Ainsworth, File)

ORCHARD PARK, N.Y. (AP) — Buffalo Bills and Sabres co-owner Kim Pegula is in the intensive care unit of a Florida hospital receiving medical care for what her family described Tuesday as “some unexpected health issues.”

The statement from the Pegula family said they are grateful for the progress she has made over the past few days, adding she has “an exceptional team of medical experts at her side.”

But the statement didn’t specify the type of medical issues and asked to respect the family’s need for privacy.

A receptionist at Boca Raton Regional Hospital said Pegula was a patient there. The Pegulas have several homes around the country, while making their base in Boca Raton.

Pegula celebrated her 53rd birthday last week, and is the wife of Terry Pegula, who turned his natural gas fortune into a Buffalo sports empire. The family also asked people to keep Kim and the Pegula family in their prayers.

The Pegulas first purchased the Sabres in February 2011, a year after Terry Pegula sold his natural gas drilling rights to Royal Dutch Shell for $4.7 billion. The Pegulas then purchased the Bills from the estate of owner and founder Ralph Wilson in 2014 for what was a then-record price of $1.4 billion.

Kim Pegula is president of both teams and is on various committees, including the NFL’s workplace diversity committee and the NHL’s executive inclusion council.

Bills coach Sean McDermott extended his prayers to the Pegula family, and credited the owners for their gracious support to him and the community.

The Pegulas have poured hundreds of millions of dollars into Buffalo, including helping spur a waterfront redevelopment by spending $200 million of their own money to build a hockey/hotel/restaurant complex called Harborcenter.

Orphaned after being born in Seoul, South Korea, Kim was adopted by Ralph and Marilyn Kerr in 1974, and grew up in Fairport, New York. She is Terry Pegula’s second wife.

The couple have three children together, including Jessica Pegula, a pro tennis player, who last week moved up to a career-best No. 8 on the WTA singles rankings.

Kim Pegula is 18 years younger than Terry, and long been considered the person to take over control in her husband’s succession plan. The Pegula’s holdings also include the Sabres’ American Hockey League affiliate in Rochester, New York, as well as National Lacrosse League franchises in Buffalo and Rochester.

The Bills’ long-term future in Buffalo was essentially secured in March, when the team reached an agreement with the state and county to build a $1.4 billion stadium across from their current home.

Kim Pegula is far more outgoing than her husband and has often assumed the role of being the voice of ownership, with Terry more focused on the nuts and bolts of drafting and player development.

In 2018, she went into detail outlining how their differing approaches are complementary and a reflection of their personalities.

“For Terry, I call him a wild-catter in the oil and gas business. What he loves is finding and developing natural gas fields, oil fields, whatever,” she said. So the whole process for him, the draft, he can make that correlation. He loves that part of finding those prospects.”

As for herself, Pegula said, “I’m more, and I think it comes from being a mom, whether it’s problem-solving, figuring things out, getting things done. Execution.”

Kim joked that while Terry will spend a game keenly watching the play unfold, while she can usually be found dealing with behind-the-scene concerns involving fan-related experiences and handling players’ needs.

She has attracted her share of criticism, particularly in overseeing the Sabres who are in the midst of the NHL’s longest playoff drought after missing the postseason for an 11th consecutive season.

In 2020, Pegula defended her role by noting she provides stability to the franchise and leaves hockey-related decisions to the Sabres management team.

“At the end of the day, there’s no one that wants to protect their organization, who cares more about the organization than Terry and I,” she told The AP. “And if there comes a point in which I feel like by me being in this role is not what’s best for the organization, I’m happy to say that. ... Do I want to do it forever? No. But I want to make sure we have the right person.”