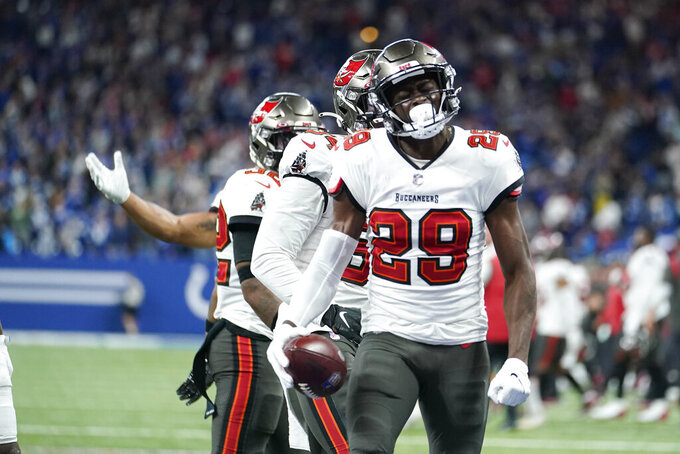 Tampa Bay Buccaneers' Pierre Desir (29) reacts after making an interception to end the game against the Indianapolis Colts in an NFL football game, Sunday, Nov. 28, 2021, in Indianapolis. (AP Photo/Michael Conroy)

TURNOVER DIFFERENTIAL: Buccaneers plus-8; Falcons minus-7.

BUCCANEERS PLAYER TO WATCH: QB Tom Brady is 9-0 and has thrown for 2,973 yards and 24 touchdowns with just three interceptions in nine career starts against the Falcons, including the postseason. The 44-year-old seven-time Super Bowl champion carved the Atlanta secondary for 276 yards, five TDs and zero picks in Tampa Bay’s Week 2 rout of the Falcons. Brady is second in the NFL with 3,403 yards passing and leads the league with 30 TD passes.

FALCONS PLAYER TO WATCH: RB Cordarrelle Patterson has been Mr. Everything for Atlanta. He leads the team in rushing (411 yards, four TDs), has 41 receptions for 500 yards and five TDs, and averages 23.7 yards on kickoff returns. As if that wasn't enough, he also lined up at safety for one play against the Jaguars and is now listed as backup at that position on the depth chart. While the Falcons have no plans to make him a part of the defensive rotation, Patterson hopes to get enough playing time to make an interception. Don't bet against him.

KEY MATCHUP: Falcons QB Matt Ryan vs. Tampa Bay pass defense. Tampa Bay has the league's top-rated run defense, so the Falcons must open up their passing game to have any chance of an upset. Ryan has endured an up-and-down season, struggling to get in sync with a receiving corps comprised entirely of journeymen and low-round draft picks. Ryan has failed to reach 200 yards passing in four of the last five games, and none of the receivers has shown an ability to get open deep.

KEY INJURIES: The Buccaneers have continued to thrive despite playing significant stretches of the season without TE Rob Gronkowski, WR Antonio Brown and CBs Sean Murphy-Bunting, Carlton Davis and Richard Sherman. Gronkowski and Murphy-Bunting have returned to the lineup. Davis is practicing again after being sidelined seven games since suffering a quadriceps injury in Week 4. Brown (ankle) missed the past five games, and now he's been hit with a three-game suspension for violating COVID-19 protocols. G Ali Marpet (abdominal) sat out last week’s win at Indianapolis. His replacement, Aaron Stinnie, went down against the Colts. If Marpet and Stinnie can’t play this week, Nick Leverett will fill in. ... The Falcons are in good shape on the injury front, with DL Jonathan Bullard (ankle) appearing to be the only major concern. CB A.J. Terrell left last week's game late in the third quarter with a shoulder injury, but said he'll be ready to go against the Bucs. LB Deion Jones is also expected back after sitting out the last game with an ailing shoulder, snapping a streak of 47 consecutive starts.

STATS AND STUFF: Brady tossed his 30th TD pass last week at Indianapolis, tying Hall of Famers Brett Favre and Peyton Manning for the second-most seasons with at least 30 scoring passes in NFL history (nine each). Only Drew Brees (10) has done it more often. ... Bucs WR Mike Evans has 74 receptions and 10 TDs in 14 career games against the Falcons. He’s tied for first in the league with 10 TD receptions and has more TD catches (71) than any player since entering the NFL as the seventh overall pick in 2014. ... Tampa Bay leads the NFL in rushing defense, allowing 81 yards per game. Only three other teams have limited opponents to less than 100 per game — Saints (92.4), Ravens (96.7) and Colts (99.7). ... Gronkowski is coming off the 30th 100-yard receiving game of his career, second most in league history for tight ends behind Hall of Famer Tony Gonzalez’s 31. ... Falcons P Thomas Morstead was the NFC special teams player of the week after a dazzling debut for Atlanta. He punted five times for 224 yards (44.8 gross average), including three punts inside the 20-yard line and a long of 55 yards against Jacksonville. Both of Morstead’s punts in the fourth quarter landed inside Jacksonville’s 20 yard-line. ... The Falcons are 0-4 at home this season and have lost six straight at Mercedes-Benz Stadium going back to 2020. ... The Falcons rushed for a season-high 149 yards vs. Jacksonville. ... Patterson became the first Atlanta player to rush for at least 100 yards and two TDs in a game since Devonta Freeman in Week 15 of the 2016 season. ... DE Dante Fowler has sacked Brady in each of the past two meetings with Tampa Bay, including a strip-sack in Week 2 that was recovered by Mykal Walker.

FANTASY TIP: Tampa Bay WR Chris Godwin has nine touchdown catches in his last six games vs. theFalcons. He’s had at least one TD in each of those outings.