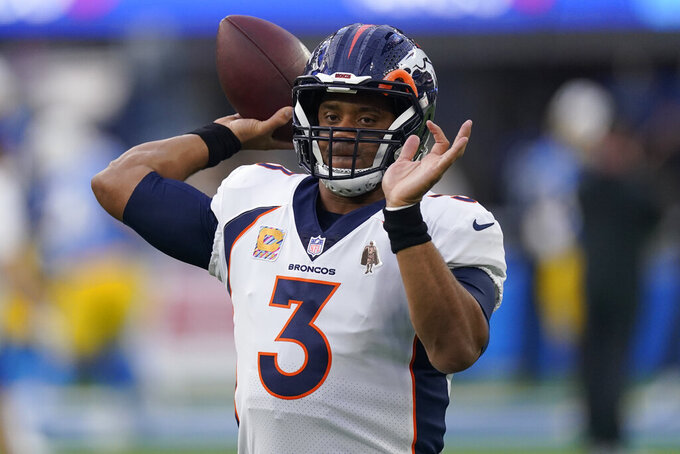 DENVER (AP) — Justin Simmons purloined Trevor Lawrence's pass at the goal line, a jaw-dropping interception that yanked the Denver Broncos back from the brink of still another faceplant that would have sent them careening home at 2-6.

Instead, they flew back from London and into their bye week with revived hope they can clamber their way out of their awful start, post their first winning record since 2016 and snap a six-year playoff drought.

It's a daunting challenge with two games left against Kansas City and road games with the Titans, Ravens and Rams.

And they'll be without defensive captain Bradley Chubb, whom GM George Paton traded to Miami to restock his supply of draft picks drained by the Russell Wilson trade that so far hasn't been working out.

“Our goals haven’t changed and we feel we can still win moving forward,” Paton said after obtaining a first-round pick and running back Chase Edmonds from the Dolphins.

Stumbling through the first half of the season, one marked by miscalculations, miscommunications and even misconceptions, makes that a difficult goal.

Despite averaging a meager 15.1 points under Wilson, all of the Broncos games have been close thanks to a phenomenal defense that's yielding just 16.5 points a game while burnishing first-time coordinator Ejiro Evero's credentials as the next hot, young head coaching candidate.

Wilson has engineered three of his patented game-winning drives, including the 21-17 comeback over the Jaguars at Wembley Staidum. But he has also faltered alarmingly in the fourth quarter and overtime, missing wide open receivers with both his eyes and his right arm.

The Broncos' new Walton-Penner ownership group — which paid $4.65 billion for the team this summer and put a guaranteed $165 million into Wilson's contract extension before the season — have watched thousands of fans defiantly stream toward the exits in crunch time or let their tickets go unused altogether.

“You want to feel like the fans are going to stay there until the final horn, the final whistle,” said new team president Damani Leech. “It's definitely something that we're focused on.”

Rookie head coach Nathaniel Hackett is focused on jumpstarting his lurching offense and he said he's not going to make any structural changes to his staff or game-day operations, such as handing the offensive play-calling duties to someone else.

“I think our staff has really worked hard on a unique schedule" Hackett said, referring to his team's four prime-time games, plus the trans-Atlantic flight last weekend. "They’ve been grinding and we’ve been trying to put the guys in the best position we possibly can. We’re evaluating everything, always. We’re making sure we check everything and find out if there’s anything else that we can do for these players to put them in even better situations.

While lamentable, all those close games, including losses by one, three, three and seven points, Hackett said, are a harbinger of good things on the horizon.

“The No. 1 thing is that this team fights,” Hackett said. “You’ve seen it every game. It comes down to the wire ... To be able to get over that hump, it’s about making those big plays.”

That's what finally happened in London when Hamler hauled in a 47-yard pass to kickstart Wilson's winning touchdown drive in the closing minutes, followed by K'Waun Williams' one-handed interception that sealed the victory.

The chemistry between Hackett and Wilson, who has shown only flashes of the nine-time Pro Bowl quarterback he was in Seattle, also needs more work.

“I agree to a certain extent with Russell that he’s not necessarily pressing, but he’s always trying to make a play. That's his mentality. ... And I'm trying to create those for him.”