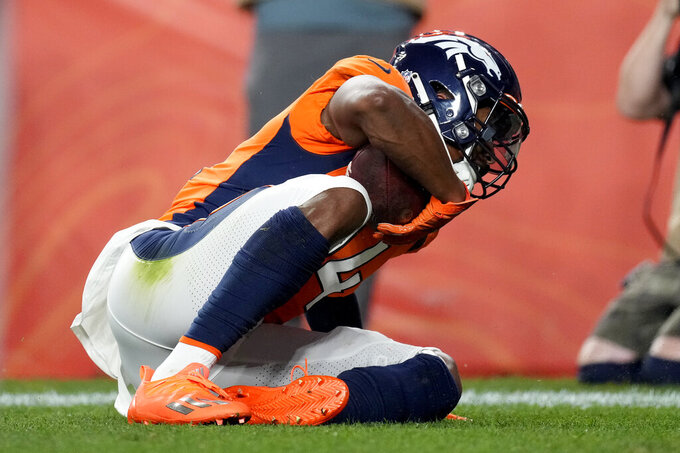 DENVER (AP) — First-year general manager George Paton brought both a fresh approach and a throwback doctrine to the Denver Broncos in his first crack at roster building following a two-decade apprenticeship in scouting and personnel.

Paton refurbished Denver's defense, starting with the secondary, and beefed up the Broncos' backfield after succeeding franchise icon John Elway in January.

Paton acquired former Minnesota ally Teddy Bridgewater from Carolina for a sixth-round pick and selected North Carolina's pinballing running back Javonte Williams in the second round of the NFL draft.

In between those moves, he drafted Alabama cornerback Patrick Surtain II with the ninth overall pick just weeks after signing cornerbacks Ronald Darby and Kyle Fuller in free agency.

The rookie class shined at training camp and in the preseason and Bridgewater bested Drew Lock in a quarterback clash to win the starting job. He'll be the 11th starting quarterback for Denver since Peyton Manning retired. No other NFL team has churned through that many passers in the last half-decade.

Bridgewater takes over an offense loaded with young talent.

The Broncos aim to establish their ground game with veteran Melvin Gordon II and Williams to open up the passing lanes for speedsters Jerry Jeudy and K.J. Hamler, Courtland Sutton, Tim Patrick, and tight ends Noah Fant and Albert Okwuegbunam.

Paton exercised the final year of Miller's contract. He returns for his 11th season after missing all of last year with a dislodged ankle tendon and will team with Pro Bowler Bradley Chubb for the first time since Sept. 29, 2019. In their 20 games together, the pass rush duo has combined for 29½ sacks, seven forced fumbles, four fumble recoveries and an interception.

Miller sees a roster that's legitimately two-deep across the board for the first time since he led the 2015 version to the Super Bowl title.

“We have some of the same players we had last year, but our team looks totally different,” Miller said. “The energy is totally different. I know I get carried away" with his annual preseason predictions, but "this year is going to be a great year for our guys.”

Some other subplots as the Broncos seek to snap the longest playoff drought ever experienced by a Super Bowl winner:

One fan of the drudging quarterback competition that dominated Denver’s offseason was Jeudy because it helped him focus as he worked to cut down on the dropped passes that plagued him as a rookie. The former Alabama star and 15th overall pick in last year’s NFL draft caught 52 passes for 856 yards and three touchdowns last season, well shy of expectations.

Regarded as the best route runner to come out of college in at least a decade, Jeudy proved his hands weren’t quite as ready. He had two crucial drops in a season-opening loss to Tennessee and dropped a half-dozen passes in a 19-16 loss to the Chargers in Week 16.

Fangio declared afterward that he hoped that would be a “defining moment” in Jeudy’s career, and the wideout responded with a season-high 140-yard game against the Raiders in Week 17 that included a 92-yard TD, the longest pass play in the league in 2020.

That focus continued in training camp and in the preseason.

Bridgewater, with his quick reads and throws that are on time and on target if not jaw-dropping passes, proved the safer bet to start than the more athletic Lock, a daredevil who may have a higher ceiling but also a lower floor.

One guy not surprisingly in his corner is Drew Brees, who watched Bridgewater go 5-0 in his stead during the 2019 season in New Orleans.

“I think Teddy is a great fit for Denver,” said Brees, now an NBC Sports analyst. “Everywhere that Teddy’s been the players have loved him, he’s really endeared himself to the team, he’s got great leadership ability.”

Brees said it won't be easy facing Patrick Mahomes and Justin Herbert twice, "and yet at the same time I think that they’ve made an upgrade with Teddy going into there and competing, winning the job, winning over the team and now being in position to help them win some games.”

Fangio is 12-20 in his two seasons as Broncos head coach and that includes 0-7 in September. With a soft schedule in the first month — Giants, Jaguars and Jets — Fangio cannot afford another slow start, especially after his poor clock management cost him chances to win September games in each of his first two seasons.

Paton signed a six-year deal and Fangio and his staff are basically on notice to prove they belong beyond 2021.