Broncos receivers have to make up for loss of leader Patrick 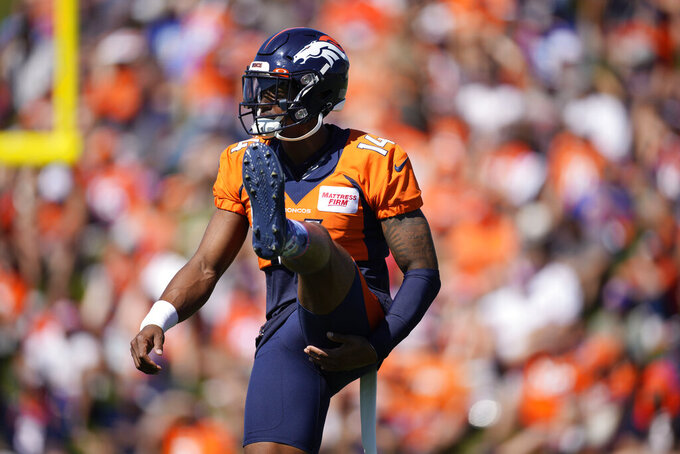 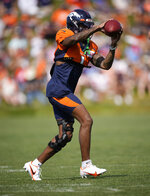 The Broncos have no choice.

Patrick tore his right ACL and needs surgery. He won't be back until 2023, so Denver will have to find a suitable stand-in to have any chance of keeping pace with the high-powered offenses in the AFC West.

“It gives somebody an opportunity to really grow and become a great player because that’s what we’re going to need,” coach Nathaniel Hackett said. "Now everybody has to pick it up and somebody has to show up."

Patrick's presence will be missed on and off the field as Hackett and quarterback Russell Wilson put the finishing touches on their hybrid offense that combines concepts from the Packers, Seahawks and Broncos.

Patrick's sure hands and dogged determination helped transform him from an undrafted afterthought who was cut twice as a rookie into a starter who emerged as Denver's leading receiver each of the past two seasons.

Despite a turnstile at quarterback, Patrick caught 104 passes for 1,476 yards and 11 touchdowns in 31 games since 2020, and he was entering the first season of a three-year, $34 million extension.

With a 6-foot-4, 212-pound frame, Patrick was especially effective in the red zone, catching eight of his TDs from inside the 20-yard line. And he didn't have any drops in 2020 and just three last season.

Although Patrick's torn ACL opens up a roster spot for an up-and-comer — barring a veteran free agent signing — the receivers who really need to step up are veterans Courtland Sutton, Jerry Jeudy and KJ Hamler along with fifth-round draft pick Montrell Washington.

Sutton returned from a torn ACL last year to catch 58 passes for 776 yards and two touchdowns, but he had nine games with just one or two receptions. He also didn't score over the final 11 games.

This summer Sutton looks more like the 2019 version that caught 72 passes for 1,112 yards and six scores, earning a Pro Bowl berth. He no longer has a limp and seems ready to return to a starring role in the offense.

Jeudy followed up a spectacular training camp last year with a dud of a season. A high right ankle sprain in the opener sidelined him until November and he finished with just 467 yards on 38 catches with zero TDs.

Touted as the cream of the best wide receiver class ever, Jeudy has just three TD grabs in two years. He scuffled through an offseason of injuries and was jailed overnight in May in a domestic dispute before being cleared.

The speedster from Penn State was activated off the PUP list this week as he returns from hip and knee operations. After a solid rookie season (30 catches, 381 yards, three TDs) he tore his left ACL in September.

Hamler said he spiraled into a deep depression over the death of his grandmother three months after his surgeries. He opened up about his journey through recovery this week, citing therapy, his faith and football.

The speedy fifth-round pick out of Samford is the Broncos' new kick returner. He could give Hamler a run for the title of fastest player on the team, and Hackett has had high praise for his work ethic and flashes of big-play ability from scrimmage.

“It's going to be exciting to see who is going to step up,” Hackett said, “because somebody's going to have to.”