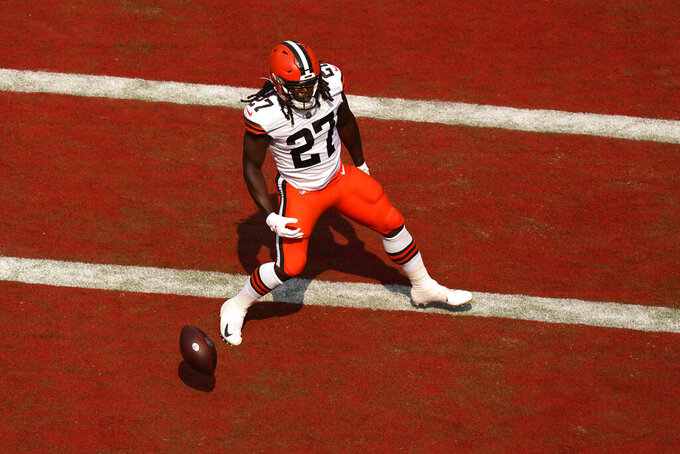 Cleveland Browns running back Kareem Hunt (27) celebrates after scoring a 2-point conversion during the first half of an NFL football game against the Kansas City Chiefs Sunday, Sept. 12, 2021, in Kansas City, Mo. (AP Photo/Charlie Riedel)

OPENING LINE: Browns by 12 1/2, according to FanDuel SportsBook

TURNOVER DIFFERENTIAL: Houston plus-3; Cleveland minus-2.

TEXANS PLAYER TO WATCH: Texans QB Tyrod Taylor. The Browns are very familiar with Taylor, who spent 2018 in Cleveland, signed to be the starter that season before rookie Baker Mayfield took over in Week 3. Taylor passed for 291 yards last week.

BROWNS PLAYER TO WATCH: RB Nick Chubb had a critical fumble in last week's loss at Kansas City. Chubb had two touchdown runs in the first half, but didn't have time to make up for his third-quarter gaffe against the Chiefs. The Texans could pay for it.

KEY MATCHUP: Texans LT Laremy Tunsil vs. Browns DE Myles Garrett. These two have a history going back to college. Garrett recorded one-half sack in the matchup last year against Tunsil, who recently returned after being sidelined with COVID-19. Garrett had the virus last season with his sickness derailing a push to win league Defensive Player of the Year honors.

KEY INJURIES: Browns LB Anthony Walker Jr. will miss at least three games after going on injured reserve with a hamstring issue. Walker led the Browns with nine tackles against the Chiefs. He’s also the defensive signal caller. ... Starting LT Jedrick Wills Jr. sprained his ankle last week and could be out. Cleveland was also without RT Jack Conklin (knee), center JC Tretter (knee) and LT Chris Hubbard (triceps) — Wills' replacement — in practice this week. ... Texans WR Anthony Miller is expected to play after missing the opener with a shoulder injury sustained in the first preseason game. OL Charlie Heck is expected back. He missed the opener after being placed on the COVID-19 list Sept. 6.

SERIES NOTES: The Browns will play in front of a capacity crowd (67,000) at FirstEnergy Stadium for the first time since the 2019 home finale. Last year, the stadium was only allowed be at 25% because of the COVID-19 pandemic. ... Cleveland snapped a five-game losing streak against Houston with its win last season. ... Taylor is one of eight former Browns on the Texans' 53-man roster. ... Cleveland DE Jadeveon Clowney was the No. 1 overall draft pick by Houston in 2014. ... Texans DL Malik Collins had career-high two sacks last season against the Browns while with Dallas.

STATS AND STUFF: Houston's 37 points last week were the most in Week 1 in franchise history. ... The Texans had three interceptions in the opener, matching their total for the entire 2020 season. ... First-year Texans coach David Culley is familiar with the Browns after working as Baltimore's pass coordinator/wide receivers coach the past two seasons. ... Taylor is one of just five QBs since 2015 with at least 8,000 yards passing and 1,500 rushing. ... QB Deshaun Watson's uncertain future continues to hang over the Texans. Watson has been named in 22 lawsuits by women alleging sexual assault or harassment against him. Earlier this summer, he requested a trade. ... Texans RB Mark Ingram rushed for 84 yards and a TD in his debut with the team last week. ... WR Brandin Cooks was Taylor's top target with five catches for 132 yards, hauling in one for 52 yards. ... Texans have 33 new players on their roster from last season. ... Cleveland rolled up 457 total yards last week against Kansas City, but the Browns were done in by three critical second-half mistakes — the last QB Baker Mayfield's interception with 1:09 remaining. ... The Browns scored touchdowns on their first three possessions. ... All four of Cleveland's TDs in the opener came on the ground. ... Mayfield is the first Browns QB to start three consecutive openers since Brian Sipe (1978-80), underscoring Cleveland's inability to find a franchise leader. ... Browns WR Jarvis Landry has 111 consecutive games with at least two catches, the fourth longest streak in history.. ... WR Odell Beckham Jr. will not make his season debut against the Texans. Beckham had reconstructive knee surgery in November, and while he's made a quicker-than-expected return, he's not ready to play. ... RB Nick Chubb has a rushing TD in seven straight games. He had 126 yards in last year's win over the Texans. RB Kareem Hunt added 109 yards. ... In just his fifth season, Garrett's 43 1/2 sacks are third in club's history behind Clay Matthews (62) and Michael Dean Perry (51 1/2). ... Browns S Grant Delpit could make his NFL debut. He missed last season with a ruptured Achilles tendon and this year's opener with a hamstring issue. ... The Browns went 6-2 at home in 2020.

FANTASY TIP: With Beckham out, speedy rookie speedy WR Anthony Schwartz could have a larger role with Cleveland's offense than expected. He had three catches for 69 yards in his debut and could be the long-ball threat Mayfield needs.