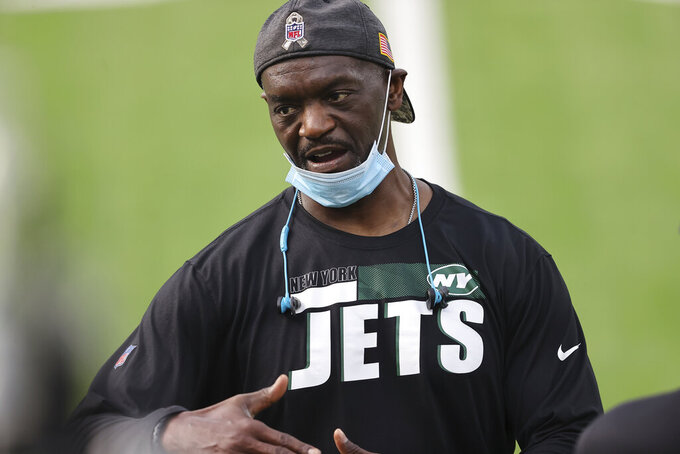 FILE - In this Nov. 22, 2020, file photo, New York Jets coach Frank Bush talks before an NFL football game against the Los Angeles Chargers in Inglewood, Calif. Bush's first test running the Jets' defense will include a familiar face. The interim defensive coordinator will square off against the Seattle Seahawks and coach Pete Carroll, who was his defensive coordinator for two years in college at N.C. State. (AP Photo/Peter Joneleit, File)

“I was very, very fortunate to have Pete in my life early as a freshman and sophomore,” said Bush, who played under Carroll during the 1981 and '82 seasons. “He taught me, if not anything else, about how your attitude is going to dictate a lot of things for you. And if you just have a proper attitude, be positive about things, things kind of have a way of working out.”

Bush finds himself in this situation after what he described as “a whirlwind” of a week.

“Obviously, Coach wasn’t satisfied with the way some things kind of happened,” said Bush, who was the team's assistant head coach and inside linebackers coach. "Unbeknownst to me, he chose me for the job in the sense of, he made his decision before he ever talked to me about the position itself. This thing could have gone a couple of different ways. I’m fortunate that it came my way. I’m excited about the opportunity.

“But, you know, he did what he had to do and he thought was necessary. And now hopefully I can stand up and deliver some of the things he wants to deliver.”

The 57-year-old Bush was not interested in revisiting Williams' curious call, which snatched what appeared to be a sure victory away from a team that has not won since Week 17 of last season.

“We've got to move on,” Bush said. “It’s the situation. It happened. We wish things were different and they’re not. So, I don’t think it would be fair to the kids or to Gregg and anybody else for me to go back and second-guess or play Monday morning quarterback on that.”

Bush takes over a defense that has had its ups and downs this season, having dealt with big-name departures — including safety Jamal Adams, who the Jets will see on the other sideline this week — injuries and inconsistency. Williams had been moving several young and inexperienced players through the secondary because of the personnel changes and trying to adapt.

Bush doesn't anticipate any wholesale changes at this point in the season, but his goal is to make sure the Jets' defense is as competitive a unit as it can be.

“These kids have a pretty good grasp of the things we were doing,” Bush said. “I guess my role is to make sure that we take advantage of what these kids are trying to provide. They’re busting their tails every day, they come to work every day, they play their butts off, they play hard. They try to limit mistakes and whatnot. And, we’re trying to put them in position to win.”

Bush is no stranger to that. He has been an assistant in several NFL spots during a nearly 30-year coaching career that began after a two-year playing stint with the Houston Oilers ended because of a congenital spinal condition. Bush has worked for the likes of Mike Shanahan in Denver, Dennis Green in Arizona and Gary Kubiak in Houston, where he served as the defensive coordinator for two seasons. He was also with Williams during two previous stops before joining him with the Jets.

“He played for us way back in the day at N.C. State, so that means nothing at all to this determination of what’s going on now," Carroll said. "But Frank’s been with a lot of good programs, a lot of good coaches.”

Bush acknowledged he has less apprehension this time around as the play caller on defense than he did with the Texans during the 2009-10 seasons when he was the coordinator. The “butterfly stages,” as he called them, are gone. He has been through it all now.

“You learn a lot of football over that time,” Bush said. “I’ve learned some of the things I thought I knew, but I didn’t know at all. And now going back into it, I can better make decisions that help put guys in position to do things better than I did before.”

And, now, he hopes to help lead the Jets to a win.

“There’s been a lot of different parts moving,” Bush said. “Trying to get things kind of moving in the same direction. And that part of it’s been a challenge, but it has been exciting and fun at the same time.”