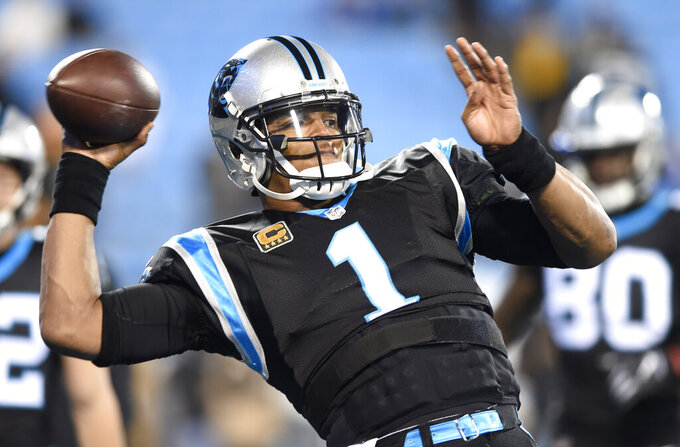 The team announced Newton had an "arthroscopic procedure" on Thursday and that he will begin the rehabilitation process immediately. There is no timetable listed for when he can begin throwing again.

Carolina still has not disclosed the exact nature of Newton's shoulder injury. The quarterback also had surgery in March of 2017 to repair a partially torn rotator cuff.

Newton struggled all season with right shoulder problems that limited his ability to throw the ball downfield. On several occasions the Panthers substituted backup Taylor Heinicke to throw Hail Mary passes because of Newton's lack of arm strength.

Panthers coach Ron Rivera decided to hold Newton out of the final two games of the 2018 regular season with what the team deemed "shoulder soreness."

After Carolina's 12-9 loss to the Saints on Dec. 17, Newton expressed frustration over not knowing what it would take to fix the shoulder.

"When you talk to different people who can help you with it, there's not any magical surgery or whatever. It's just time," Newton said at the time. "I've tried and done everything."

Newton said at the time he had taken anti-inflammatories, got massages and tried acupuncture.

At that time he said doctors couldn't say if he needed surgery.

"I've been eager to go to (head trainer Ryan Vermillion's) office, weeks and weeks and weeks and kind of find out what it is. 'Did you find something? What am I supposed to do? What do we have to do?'" Newton said. "... It is what it was, just a lot of soreness and tension in the joints."

The decision to have surgery was made earlier this week by the team and Newton's camp.

The Panthers finished 7-9 in 2018 and out of playoff contention after starting the season 6-2.

The 29-year-old Newton threw for 3,385 passing yards with 24 touchdowns and 13 interceptions, but struggled mightily down the stretch and was a mere shell of his former self in the final few games he played. He barely practiced at all during the second half of the season, which appeared to throw off his timing with his receivers.

Panthers owner David Tepper said last week that he wasn't sure when Newton would be back on the field, but was hoping for the best.

He also said the team was going to "keep its options open" at quarterback and have a backup plan in place in case Newton isn't able to return to full strength next season.

Tepper wouldn't be opposed to a situation like Colts quarterback Andrew Luck went through. Luck sat out a season because of a shoulder injury and returned to lead the Colts to the playoffs this season.

"If you told me that (Newton) took a year off and could be fully recovered and everything else and that's what it took, an extra year, why wouldn't you do that?" Tepper said. "Now, we would have to do other things and we'd have to go out and get another quarterback, which, if you could find me some more cap space, I'd appreciate that."

Newton has two years left on a five-year, $103.7 million contract.