Chargers in pursuit of new franchise quarterback in draft 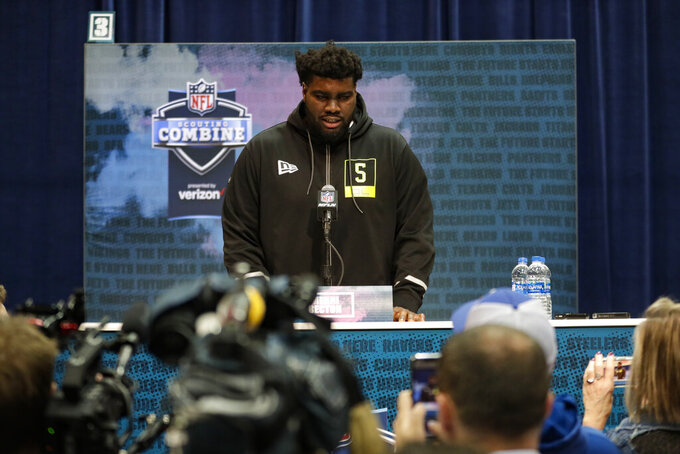 COSTA MESA, Calif. (AP) — After bidding adieu to Philip Rivers early in the offseason, the Los Angeles Chargers are searching for their next franchise quarterback in this year's NFL draft.

Los Angeles has the sixth-overall pick after a disappointing 5-11 season where most of its losses were by eight points or less. General manager Tom Telesco and coach Anthony Lynn have confidence in Tyrod Taylor, but they don't have a long-term answer as they prepare to move into their new multi-billion dollar stadium at Hollywood Park this upcoming season.

Telesco said during the combine that he is searching for many of the attributes that Rivers displayed over his 14 seasons as the Chargers' starter.

“You want that intangible part, too. It’s very important for the quarterback to be able to lead, to have work ethic, preparation skills, handle adversity — all of those skills. That’s so important for a quarterback,” Telesco said. "And then obviously you want the physical skills, too — quick decision-maker on the field, arm strength, feet in the pocket, all that stuff. That’s all part of scouting.”

LSU's Joe Burrow is expected to be selected by Cincinnati with the first pick, which would leave Alabama's Tua Tagovailoa and Oregon's Justin Herbert as the most likely options.

Tagovailoa has the name factor and showed a lot of poise with the Crimson Tide, which is important in a crowded Los Angeles sports market. With Taylor already in the fold, there wouldn't be much pressure to start right away, which would allow him to rehab at his own pace from last season's hip injury.

Herbert started 42 games at Oregon. He has shown the ability to excel in play action, but questions remain about his decision-making and accuracy.

Here are some other things to watch when the Chargers are on the clock:

Besides quarterback, the Chargers' other glaring need is left tackle. They traded Russell Okung to Carolina when the new league year started and don't have a long-term answer at the position.

If Tagovailoa and Herbert are both off the board by the time the Chargers pick, they could wait until the second day to take a quarterback.

Utah State's Jordan Love, who grew up in Bakersfield, California, is expected to go late in the first round or early in the second. Georgia's Jake Fromm and Washington's Jacob Eason might be around in the third round.

The Chargers didn't expect to be in position to draft Derwin James at 17, but the dynamic safety fell into their laps and was named an All-Pro as a rookie.

They might be able to grab another athletic defender if Isiah Simmons is still on the board. Clemson's All-American linebacker would upgrade a position group that has been average and lacking depth the past couple seasons.

He also gives the Chargers another run stopper, an area where they struggled last year.

Los Angeles leaned heavily on defense in last year's draft, with five of the seven selections on that side of the ball. With Shane Steichen taking over as offensive coordinator and questions at nearly every position, it is likely that this year's selections will trend more heavily on offense.

This is Telesco's eighth draft as the Chargers' general manager. He has had first-round successes with defensive end Joey Bosa (2016), wide receiver Mike Williams (2017) and James, but last year's class was disappointing.

Defensive lineman Jerry Tillery (first round) didn't see much of the field, safety Nasir Adderley (second round) missed the entire year due to injury. Offensive tackle Trey Pipkins (third round) is a developmental project.