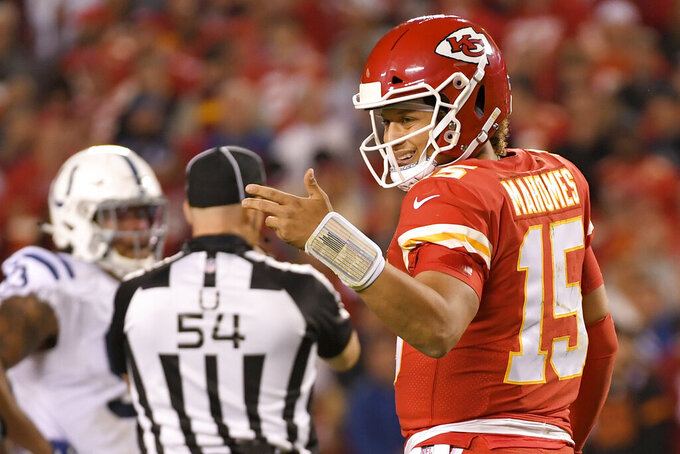 Kansas City Chiefs quarterback Patrick Mahomes (15) looks to the sideline during the first half of the team's NFL football game against the Indianapolis Colts in Kansas City, Mo., Sunday, Oct. 6, 2019. (AP Photo/Reed Hoffmann)

KANSAS CITY, Mo. (AP) — The Chiefs rolled into Arrowhead Stadium on Sunday night knowing Indianapolis was missing a bunch of defensive backs to injuries and quite confident Patrick Mahomes could pick apart the Colts' backups.

Turned out it was Indianapolis that dominated a bunch of Kansas City second-stringers.

One by one, the Chiefs lost crucial players on both sides of the ball, and the Colts took advantage of their flailing backups. The result was a 19-13 victory not only ended Kansas City's incredible run of scoring at least 26 points in 22 straight games, but also proved Mahomes and Co. are fallible.

It wasn't entirely their fault.

Yes, the Chiefs were flagged 11 times for 125 yards. Yes, they lost a fumble when LeSean McCoy had the ball poked loose deep in Indianapolis territory. Yes, their defensive backs kept getting beat by the fleet of Colts wide receivers, resulting in big completions or yet more penalties.

But those miscues often came with a bunch of backups on the field.

Wide receiver Sammy Watkins was the first to leave the game, unable to press through a hamstring injury that left him questionable to play at all. He was joined on the sideline later by Byron Pringle, who caught six passes for 103 yards and a score before ending up in the concussion protocol.

"You don't ever know if a man will go down so you got to know the playbook and be ready to step up," Pringle said. "It's time to show what you've been working hard for all week."

Up front, the Chiefs already were missing left tackle Eric Fisher, who underwent core muscle surgery and isn't expected back for several more weeks. Then they lost left guard Andrew Wylie to an ankle injury, forcing them to use two ineffective backups — Cam Erving at tackle and Ryan Hunter at guard.

"We have the best quarterback in the world, the best receivers, all that stuff," Chiefs right tackle Mitchell Schwartz said. "It was just a matter of guys are getting there too soon."

Erving in particular had a miserable night. He was dominated by the Colts defensive front, flagged for unsportsmanlike conduct for a hit out of bounds, and once was pushed so far back in the pocket that he stepped on Mahomes' left ankle, leaving the league MVP to limp to the sideline.

Things weren't much better for the Chiefs on defense.

Middle linebacker Anthony Hitchens, who has the defensive radio in his helmet and is responsible for getting everyone aligned, left early with a groin injury. Defensive linemen Xavier Williams (ankle) and Chris Jones (groin) departed later in the game, seriously wounding the Chiefs at the point of attack.

It was hardly surprising that the Marlon Mack ran for 132 yards, averaging more than 4 1/2 yards a pop, and that the Colts piled up 180 yards and a touchdown on the ground.

"I've got to get the bigs playing better on both sides, the offensive and defensive line. It starts there," Reid said. "When you win it starts there. When you lose it starts there, too. But it's early in the season. We'll come back and learn from this, and some of these injuries, we'll get healthy."

All before they get their bye and a chance to really get healthy.

"Obviously we have to move on pretty quickly. We're still early in the season," said Mahomes, who dismissed the seriousness of his ailing ankle, the same one he hurt in Week 1 against Jacksonville. "This loss hurts a lot but there's a long way to go. This is something we'll learn from."