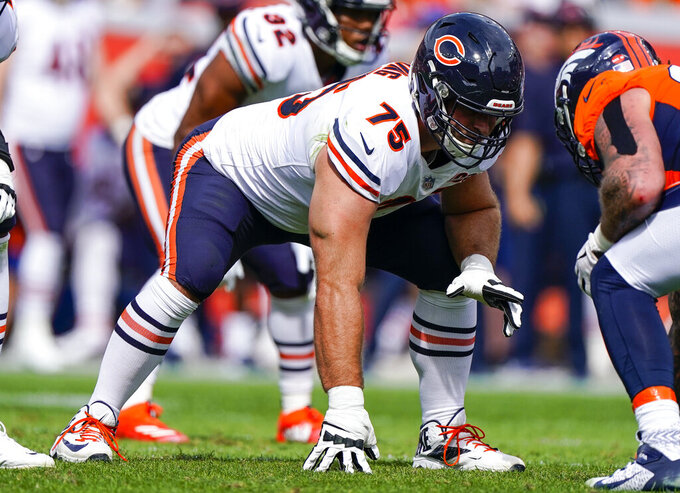 File-This Sept. 15, 2019, file photo shows Chicago Bears offensive guard Kyle Long lining up during an NFL football game between the Denver Broncos and the Chicago Bears in Denver. The offensive line that the Kansas City Chiefs aggressively overhauled this offseason has taken a hit with a knee injury to veteran Long during voluntary workouts that could require surgery and keep him out of training camp. (AP Photo/Jack Dempsey, File)

KANSAS CITY, Mo. (AP) — The offensive line that the Kansas City Chiefs aggressively overhauled this offseason has taken a hit with a knee injury to veteran Kyle Long during voluntary workouts that could require surgery and keep him out of training camp.

The 32-year-old Long came out of a one-year retirement designed largely to get him healthy to sign a one-year contract with the Chiefs, who completely recast their offensive line after it was decimated by injuries and opt-outs last season. But he failed to make it through three weeks of workouts before another injury sidelined him.

“We'll just see how he does here. It doesn't look like it's ligaments, but we'll see,” Chiefs coach Andy Reid said following the last of the workouts Thursday. “There's a chance he has to have surgery on it, but we'll see where it's at.”

The Chiefs begin a three-day mandatory minicamp Tuesday, then are off until reporting to training camp in late July.

Long has spent most of his career at right guard, but he also was a Pro Bowl selection at right tackle, and the Chiefs were keen to see him play both positions. Now, they are looking at former starter Laurent Duvernay-Tardif returning from his opt-out to play right guard and veteran Mike Remmers or 2020 draft pick Lucas Niang to play right tackle.

The Chiefs are also high on Trey Smith, who fell to the sixth round of April's draft due to his medical history.

“We're lucky that we have some good players in there,” Reid said, “and then Larry is coming back. You add all of that in there with (Andrew) Wylie, who has a couple years of starting under his belt, and we should be OK.”

Duvernay-Tardif is expected at the mandatory minicamp, despite travel concerns due to COVID-19. He has been in his native Canada, where the trained physician spent last year helping people who contracted the coronavirus.

Despite the injury to Long, the Chiefs appear to be pleased with the work they put in the past three weeks, when several teams opted to skip voluntary workouts altogether. It was especially valuable for the past two crops of rookies, those who missed the entire offseason program last year because of COVID-19 and those just learning the NFL ropes.

“Of course it was tough for those guys that came in last year, to get their heads started in OTAs and minicamp,” said Chiefs linebacker Willie Gay Jr., who returned from a torn meniscus suffered in late January that kept him out of the Super Bowl.

Chiefs cornerback Charvarius Ward signed his restricted free agent tender, which means he will earn about $3.4 million for the coming season. The 25-year-old Ward was traded to the Chiefs just before the start of the 2018 season and has been a valuable contributor in the secondary, starting 31 of 43 games over the past three seasons.

The Chiefs put an original-round tender on Ward in mid-March. That meant any other team could sign him, but the Chiefs would have had the right to match any offer.

Reid has indicated that the majority of players and staff have been vaccinated, though he has not gone out of his way to encourage players to get immunized. Rather, the Chiefs have provided information from the league and made physicians available to answer any questions.

“I'm doing what's best for me: I'm getting vaccinated,” Gay said, “but it's to help me to focus on things that are important, not worry about masks and having to catch COVID or anything like that. I'm just taking the information given.”

“Chris is a great guy. You can tell this is his team and we're following suit,” Reed said. “He's a great player, real funny. A real cool dude. It's self-explanatory how he plays. One of the best in the league.”