Chiefs move on with Moore while Mahomes rehabs injury 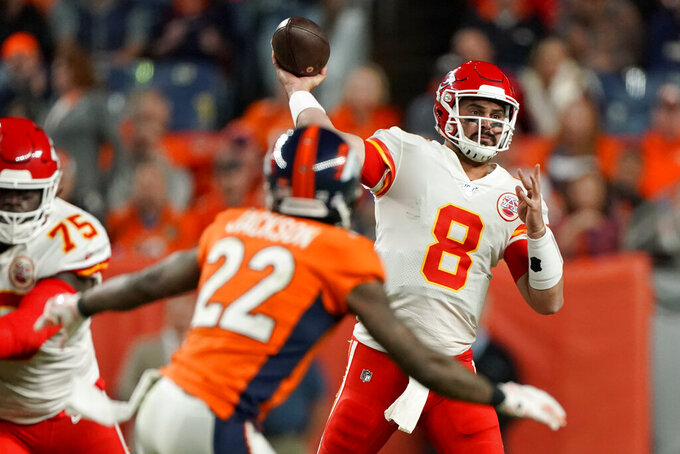 KANSAS CITY, Mo. (AP) — Matt Moore spent his spring as a scouting assistant with the Miami Dolphins, and he spent most of the summer gearing up for a season as an assistant high school football coach.

He'll be spending his fall trying to keep the Kansas City Chiefs in the Super Bowl hunt.

The journeyman quarterback, who was signed on the eve of the regular season following an injury to backup Chiefs quarterback Chad Henne, has been thrust into the starting role after reigning league MVP Patrick Mahomes dislocated his kneecap in Thursday night's victory over the Broncos.

The injury happened as Mahomes was sneaking for a first down in the second quarter, and Moore played the rest of the way — his first meaningful snaps in two years — in an eventual 30-6 rout.

"You saw production from him for a number of years. He was in those situations where people would debate he should be the starter or the other guy should be the starter, wherever he as," Chiefs coach Andy Reid said. "You saw that ability to start football games and win."

Now, his responsibility will be to keep the Chiefs (5-2) on the right track until Mahomes is able to return. An MRI taken Friday revealed no major damage to the ligaments in his right knee, and the team is hopeful that Mahomes could return in four to six weeks — roughly the amount of time until its bye.

"He's an inspirational guy," Moore said, when asked whether Mahomes said anything in the post-game locker room. "He said a bunch of stuff about the team win, gave a bunch of props to the defense. The defense played outstanding. Just kind of brought us together and broke us down."

They were in search of a veteran backup for Mahomes, who was heading into his first season as the starter, and were wavering between Moore and Henne. They wound up selecting the latter, but Henne broke his ankle during a preseason game and the Chiefs decided to give Moore a chance.

He quickly picked up the intricate Kansas City offense over the first six weeks of the season, and he was good enough to keep the Broncos guessing the rest of the way Thursday night.

Moore wound up completing 10 passes for 117 yards with a 57-yard scoring strike to Tyreek Hill.

Most importantly, he didn't throw a pick or make any big mistakes.

"I was devastated for (Mahomes), obviously. He's been down and popped up pretty quick," Moore said. "This one obviously wasn't that case. So I just hope he's OK. At the same time, we have to go and win a football game, and I've been in this position before and you just kind of move forward."

Moore went 15-15 in 30 starts with the Panthers and Dolphins, and he appeared in 51 games in all over the course of 10 seasons with them. Adds his totals from Thursday night and he's thrown for more than 7,000 yards with 46 touchdown passes and 36 interceptions.

Along with experience, he also appears to have the support of a locker room full of star players who expect nothing short of a championship. Hill is back from an earlier collarbone injury, and Kansas City could get more offensive reinforcements back soon — wide receiver Sammy Watkins (hamstring), left tackle Eric Fisher (groin) and left guard Andrew Wylie (ankle) are making progress.

The Chiefs also have a little extra time for Moore to get settled. They played the Broncos on Thursday night, and their next game doesn't come until they face the Packers a week from Sunday.

"Matt has been in the league for a long time. We have trust in him," Hardman said. "We just had to go out there and play and keep everything the same. We can't dwell on it and get down."