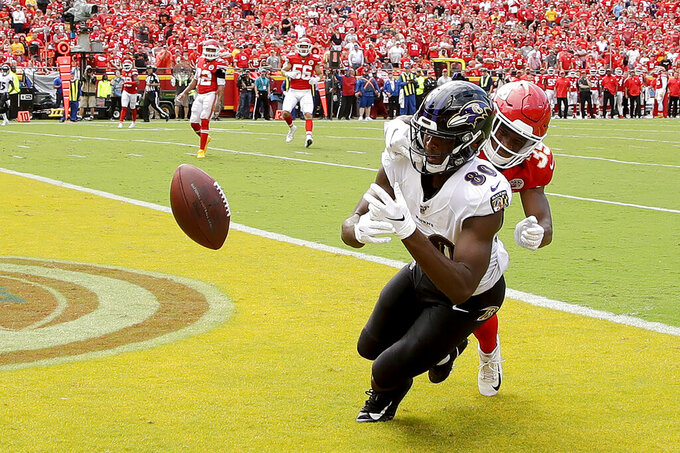 KANSAS CITY, Mo. (AP) — After watching his Ravens miss a trio of 2-point conversions and fail on fourth down near midfield, coach John Harbaugh was forced to defend his go-for-broke decision-making against the Chiefs last week.

Turned out to be an easy defense to make.

That's because the Chiefs' high-scoring offense, led by record-setting quarterback Patrick Mahomes and his fleet, sure-handed teammates, has been so good over the past season-plus that they have fundamentally altered the way many teams are forced to play against them.

In Baltimore's case, neither were touchdowns and extra points.

"We had a mindset that we were going to come in and try to score as many points as we could," Harbaugh said. "So, that's what we tried to do. I know we all felt the same way."

Now, this perspective is unique in that just about every coach, at every level of the game, repeats the same tired cliche about focusing on themselves. "If we do what we do best, and we execute as well as we can," the line of thinking goes, "the rest will take care of itself."

Except that the NFL is coming to the realization that even that might not be enough against Kansas City, which has scored at least 26 points in 21 consecutive games.

Mahomes leads the league in passing, the Chiefs are second in the league in total offense, and perhaps the only reason they are third behind Baltimore and New England in scoring is that they haven't needed to be any higher-scoring so far.

They ran roughshod through Jacksonville in Week 1, allowing their starters to step off the gas in the fourth quarter. They cruised to a 28-10 win over Oakland in Week 2. And while the final score last week was 33-28, the reality is Kansas City had the Ravens in a 30-13 hole in the fourth quarter.

"This offense is extremely difficult," said Lions coach Matt Patricia, whose team gets the next chance at stopping it Sunday in Detroit. "Andy (Reid) does a great job of blending offenses together to fit his personnel. Mahomes is an unbelievable player. He's almost unstoppable in some situations.

"For us defensively," said Patricia, the longtime Patriots defensive coordinator, "we know we have a lot of work to do. We have a huge challenge ahead of us. We're just going to do our best to defend it."

One of the challenges, Patricia said, is deciding how to prioritize things.

Foolish teams have leaned on the old axiom of stopping the run first, and Mahomes has merely picked them apart downfield. So increasingly, teams have begun dropping more and more players in pass coverage while simultaneously blitzing, forcing Mahomes into making quick decisions — and forcing the quarterback with possibly the strongest arm in the league into making shorter throws.

There is a major decision to make in that, too. Focus on big-play threat Sammy Watkins, who had 198 yards and three TDs against the Jaguars, and Demarcus Robinson or Mecole Hardman or Travis Kelce will be open. Robinson diced the Raiders for 174 yards and two touchdowns, while Hardman hauled in an 83-yard TD reception against the Ravens in the rookie wide receiver's big breakthrough game.

"I actually was thinking of throwing to Sammy over the middle," Mahomes explained, when asked about that particular touchdown toss, "and that was my first read. But I saw the safety jump him and I shot it to Mecole. That's just the progression on the read."

He makes it sound (and look) so simple.

No wonder teams feel the need to aggressively score every point possible.

"I think that's what jumped out to me the most," said Ravens cornerback Marlon Humphrey, "is that you can pick anyone — one week Sammy is top target, the next week it's Robinson. We knew going into the game who their guys were. It's one thing to say that, but going to the game, they definitely showed it."