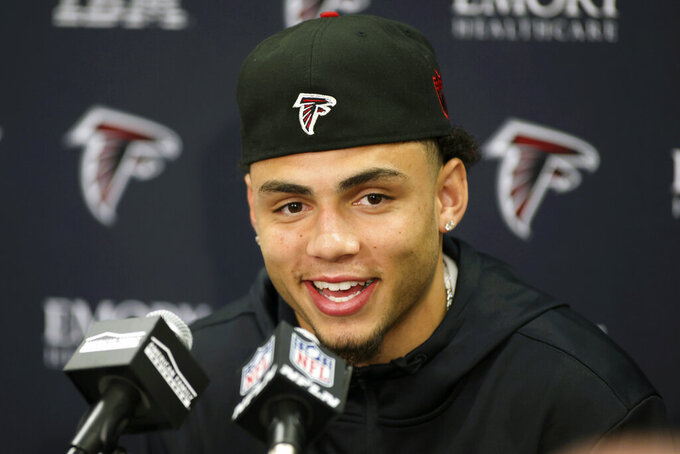 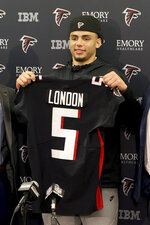 FLOWERY BRANCH, Ga. (AP) — On a draft night the Atlanta Falcons focused on their defense, adding two edge rushers, the new name in the quarterback room stole the show.

Ending the NFL draft's long quarterback drought, the Falcons picked Cinncinnati's Desmond Ridder in the third round on Friday night.

Ridder likely will play behind Marcus Mariota this season while given an opportunity to prove he can be the future starter. Ridder was only the second quarterback taken in the draft, following Pitt's Kenny Pickett, selected by the Pittsburgh Steelers in the first round.

Ridder agonized over the long wait and at one point said he sent a text to Liberty quarterback Malik Willis, saying “What’s going on? Man, they don’t like us or what?”

The long wait paid off. Ridder said he saw the Falcons as “a perfect fit” and said he's especially excited to work with Mariota, a player he says he compares himself to.

“Him being my comp, I didn’t want to put words in anyone’s mouth but I was like man, if they’re going to get him, why not get a younger guy just like him?” Ridder said. “That’s obviously myself. So when they picked him up, that got me really excited for Atlanta.”

“Marcus being a veteran gives us a chance going forward,” said Falcons coach Arthur Smith. “But as always at any position, the best player will play.”

Ridder (6-foot-3, 211 pounds) was a four-year starter at Cincinnati and led the Bearcats to last season's College Football Playoff. He threw for 30 touchdown passes as a senior and set a school career record with 87 scoring passes.

Atlanta traded up in the second round to address one of their biggest needs by selecting Penn State edge rusher Arnold Ebiketie. The Falcons added another edge rusher, Western Kentucky's DeAngelo Malone, with their second of two third-round picks.

Atlanta acquired the No. 38 overall pick used for Ebiketie from the New York Giants, who obtained the No. 43 selection in the second round and a fourth-round pick, No. 114 overall.

Ebiketie (6-2, 250 pounds) was regarded as one of the top pass rushers in the draft. The Cameroon native had a combined 15 1/2 sacks in his career with Temple and Penn State, including 9 1/2 with the Nittany Lions in 2021.

Later in the second round, Atlanta added more defensive help by selecting Montana State linebacker Troy Andersen, a converted quarterback. Andersen (6-3 1/2, 243 pounds) had 147 tackles, including 14 for losses, with two sacks and two interceptions in 2021.

With a nod to his pass-rush skills, Ebiketie has assigned himself the title of “Dr.” on his Twitter account.

“Actually I gave myself the nickname,” Ebiketie said. “A lot of people ask me why I call myself a doctor. I call myself the doctor of the pass rush and I’m going to stick with it for a while.”

After trading away their fourth-round pick, the Falcons will have three selections on Saturday, including two in the sixth round.

London (6-4, 219 pounds) said his uses his size, strength and background in basketball to overcome his lack of breakaway speed. He said his top time in the 40-yard dash was 4.5 seconds.

London didn't run in his workout for NFL scouts leading up to the draft because he was still recovering from a fractured right ankle which ended his 2021 season after eight games.

In his visit to the Falcons facility on Friday, London posed with his new No. 5 jersey and was asked about his perceived lack of separation speed.

“At the end of the day you could say I’m covered,” London said, using his fingers for air quotes. “That’s really not the case. I’ll go over the top of somebody and at the same time if you go watch tape I’ve definitely blown by a couple people. That’s all I’ve got to say about that.”