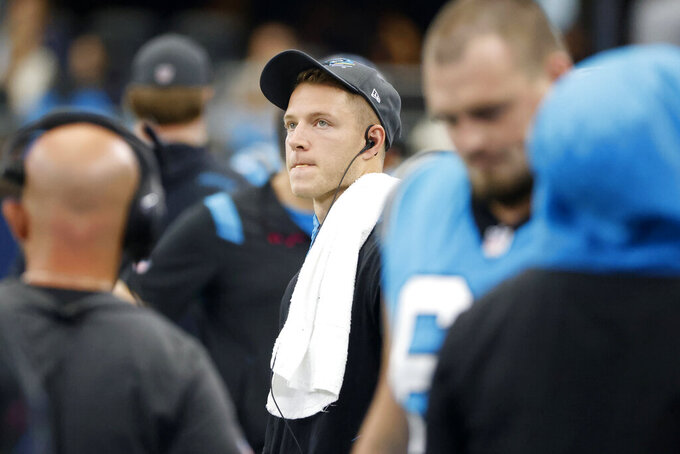 FILE - Carolina Panthers running back Christian McCaffrey watches play from the sideline against the Dallas Cowboys in the first half of a NFL football game in Arlington, Texas, Sunday, Oct. 3, 2021. Carolina Panthers running back Christian McCaffrey and quarterback Sam Darnold showed up for practice on Wednesday, Nov. 3, 2021, in full pads. However, their status for Sunday's game against the New England Patriots remained very much up in the air.(AP Photo/Michael Ainsworth, File)

CHARLOTTE, N.C. (AP) — Panthers coach Matt Rhule said running back Christian McCaffrey has a chance to play Sunday against the New England Patriots if he can make it through practice on Saturday without any setbacks.

Quarterback Sam Darnold (concussion/shoulder) could be active too after being listed as questionable on the injury report Friday.

Rhule said he is “hopeful“ that McCaffrey can play, but indicated the 2019 All-Pro wouldn’t see a full amount of snaps if he’s able to go. McCaffrey has missed the last five games with a hamstring injury and was designated to return from injured reserve earlier this week. He is not yet on the 53-man roster, so he has no injury designation.

“Saturday is typically the day we move around and try to have explosive movements,” Rhule said. “So we will see if he is able to hit full speed. He is obviously in good condition and knows the game plan. So I am hopeful that Christian might play, I really am.”

McCaffrey had not practiced in three weeks before this week, so Rhule doesn’t want to risk overusing his star player. He said he is happy with how McCaffrey's backup, Chuba Hubbard, has performed.

“He is just coming back and I don't think it would be one of those 50- or 60- or 70-play games,” Rhule said of McCaffrey. “... Christian will play when he is ready and only play as many snaps as seems appropriate for where he is coming back. And hopefully if we do that we can build him back up to getting 40, 50 or 60 snaps when need be.”

Meanwhile, Darnold is listed as questionable and Rhule suggested chance he may be active for Sunday if he clears the concussion protocol. Rhule also indicated Darnold is battling a shoulder injury, which may be just as problematic as the concussion.

Darnold could serve as a backup Sunday to P.J. Walker, who has taken most of the first-team reps at quarterback this week in practice, Rhule said. Darnold was injured in last week’s 19-13 win over the Atlanta Falcons.

“I think he looks good and signs are positive,” Rhule said of Darnold, who is 4-4 as a starter. “We will see what he can do tomorrow. Anything is on the table and he could be (ready) for this game, which would be great.”