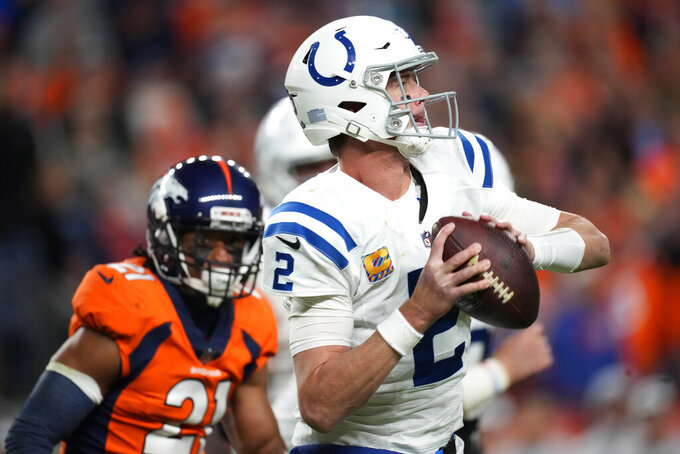 Now he's hoping some extra rest, a little more film study and a full week of prep work can get Indy's stagnant offense off the ground and back on its feet. The next test for this ongoing line dance comes Sunday against AFC South rival Jacksonville.

“There’s going to be growing pains,” Reich said Wednesday when asked about rookie Bernhard Raimann's first start. “We think he has the makeup, has the physical talent. Like a lot of our young players, it’s a process. They get better fast when they play, and we think he’s going to get better.”

The Colts (2-2-1) need Raimann — and everyone else up front — to turn things around quickly because Indy's offense hasn't just been out of step, it's been woefully bad.

Last week at Denver, the Colts managed four field goals in a dismal 12-9 overtime victory, making the second time this season they failed to score a touchdown.

How bleak has this season been?

Indy's once-stout offensive line has allowed 21 sacks, tied with the Rams for the league's most. The Colts once-powerful ground game has been stalled at No. 26 in the league, they're No. 30 in giveaways (11) and a fan base accustomed to seeing points by the dozens finds itself watching the lowest-scoring team in the league (13.8 points).

As a result, Reich made wholesale changes.

Raimann was called for four first-half penalties, three of them for holding, and Pryor again struggled to slow down the pass rush. Quarterback Matt Ryan was sacked five more times, under constant duress, threw two interceptions and had two more fumbles to give him 11 this season.

Still, Reich believes this five-man crew can be the solution.

“We all know Braden was a right guard in college, probably his natural position,” Reich said, explaining Smith's move was designed to help create inside running lanes. “Matt (Pryor) has played a lot of right tackle, so we thought that was a good move.”

Things can't get much worse in this week's rematch against the Jags (2-3).

When they last met in Week 2, Ryan was sacked five times, threw three interceptions and finished with a rating of 34.0 as Jacksonville ran away with a 24-0 victory. Indy has lost four of the past six in this series and has 11 total points in the past two.

And while the status of Kelly remains unclear, Reich remains committed to keeping Raimann in the lineup and Raimann expects to play better in start No. 2.

“Definitely, a rough start, a lot to learn from,” the third-round pick said. “That's something to focus on during the week in practice and not let the same mistake happen twice.”

As he continues to get acclimated with receiver Michael Pittman Jr. and a young, inexperienced group of complementary targets, the 2016 league MVP knows the Colts must be more proficient in every offensive phase.

And that starts with fewer negative plays.

For the Colts, those miscues have caused repeated missteps. They've failed to top the 20-point mark or held a halftime lead in seven straight games, going back to last Christmas, and are spending another week searching for solutions.

On Sunday, they'll find out if any of it works.

“Certainly, we've had a lot of moving parts there through the first five games,” Ryan said. “I think all those guys, us as a team and as a coaching staff are doing everything we can to put the right parts in the right places. But our guys continue to come to work every day, they're looking to get better and we're working on things.”