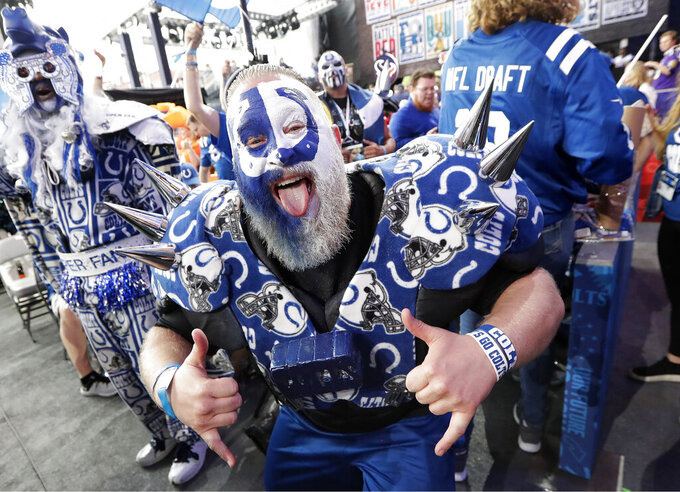 A Indianapolis Colts fan cheers ahead of the first round at the NFL football draft, Thursday, April 25, 2019, in Nashville, Tenn. (AP Photo/Mark Humphrey)

First, he moved back to get more picks. Then he invested heavily in the defense. And finally, he gave quarterback Andrew Luck some help.

After trading away Indy's first-round pick on Thursday, Ballard took cornerback Rock Ya-Sin, pass-rushing linebacker Ben Banogu and receiver Parris Campbell with his three second-round picks and closed out Day 2 by taking linebacker Bobby Okereke in the third round.

But it wasn't just the way Ballard drafted that seemed so familiar; it was who he took and what they sounded like, too.

"I only played football in high school for two years so I was slightly under recruited, I feel like," Ya-Sin said. "I just believed in myself. I felt like I had the talent, I had the work ethic and I had great coaches that were pushing me."

Ya-Sin impressed the Colts so much in his only season at the Bowl Subdivision level at Temple that Indy took him No. 34 — the first time they've chosen a cornerback that high since selecting Marlin Jackson No. 29 overall in 2005.

Last year, Ballard used the first of his four second-round picks, No. 36 overall, on another overlooked prep player who wound up at a Football Championship Subdivision school, linebacker Darius Leonard. He led the NFL in tackles, was named the NFL's Defensive Rookie of the Year and became a first-team All-Pro in 2018.

This time, with a pick acquired from the New York Jets in 2018, Ballard took the 6-foot, 192-pound Ya-Sin, a two-time George state wrestling champion with a reputation for getting physical.

Could Ballard hit it big again with a defense that made major strides in its first season under defensive coordinator Matt Eberflus?

"Gil Brandt said something the other night, he said I've always loved guys who transfer up," Ballard said. "Why do they do it? Because they know they're good. Rock did that, Ben did the same thing. They have a high level of confidence they can play. That was one of the neat things about Darius, he stepped on that Senior Bowl field and he belonged. These kids believe they belong."

In the meantime, Ballard continues to collect talent and picks.

After sending the No. 26 overall pick to Washington for two second-rounders Thursday, Ballard dealt the first of the two picks, No. 49 overall, to Cleveland, moved back three spots, found another pass-rusher in the 6-4, 249-pound Banogu and added a fifth-round pick to his draft weekend arsenal.

Banogu played primarily defensive line in college and after transferring from Louisiana-Monroe to TCU in 2016, recorded 8 ½ sacks in each of his final two college seasons. The Colts envision using him all over the field.

"I'm ready to do just about anything. With the coaching staff and my football I.Q., I feel like I can pick it up pretty fast and be effective," he said. "Doing some of the linebacker stuff at the Senior Bowl really opened my eyes to all the neat ways you can kind of create plays and turnovers for your team."

Then Ballard got some help for Luck — taking the 6-1, 208-pound Campbell at No. 59. Campbell and Andy Isabella were tied for the fastest 40-yard dash time (4.31 seconds) among receivers at February's scouting combine. Campbell caught a single-season school-record at Ohio State with 90 receptions last season. He also had 1,063 yards and 12 TDs.

Ballard closed out the day by adding the 6-3, 239-pound Okereke from Stanford. The fifth linebacker selected by the Colts since 2018 recorded 182 tackles and 7½ sacks in his final two college seasons.

And the Colts may be just getting started. Ballard has two picks each in the fourth and fifth rounds and six picks total on Saturday.

"We're playing a lot of teams with very good quarterbacks this year and you've got to be able to run them down," Ballard said. That's always going to be a priority for us."