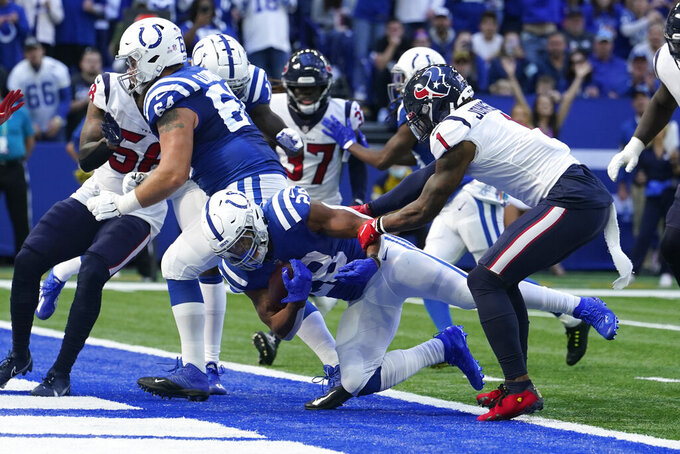 Indianapolis Colts' Jonathan Taylor (28) rushes for a touchdown against Houston Texans' Lonnie Johnson (1) during the second half of an NFL football game, Sunday, Oct. 17, 2021, in Indianapolis. (AP Photo/Michael Conroy) 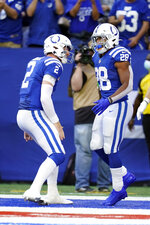 He's running hard, running effectively, and over the last week running, perhaps, better than any other NFL back.

In a six-day span, the second-year running back had 327 yards from scrimmage, scored four touchdowns and almost single-handedly put the Colts back in the playoff conversation thanks to an offense that looks tailor-made for his skill set.

“He is a beast back there," quarterback Carson Wentz said. “He is so good between the tackles, but when he gets out on the second level, he is so fast. Like he is a different speed, and I know he is a problem for defenses."

The game tapes show it.

Last Monday, at Baltimore, he took a screen pass and sprinted 76 yards to the end zone for a 7-0 lead. Two quarters later, his power and vision were on display during a 4-yard TD run that made it 22-3. He finished with 53 yards rushing and a career-high 116 yards receiving.

The encore was equally impressive. Taylor got the Colts out of a second-half hole with an 83-yard dash before being caught from behind, a play that left teammate Michael Pittman Jr. in disbelief. Three plays later, Taylor scored again to make it 24-3. He wound up rushing for 145 yards with two scores.

“It really kind of stuns or shocks a defense and then it’s up to that defense how are they going to respond?” Taylor said. “After a big play like that, you have to continue to keep your foot on the gas to not allow them to get a chance to settle back in.”

For the former Wisconsin star, who nearly produced three 2,000-yard seasons in college, this is old hat. Over his last 13 games, including a playoff contest at Buffalo, Taylor has rushed for 1,291 yards and 12 touchdowns while catching 31 passes for 312 yards and two more scores. He's one of six players in franchise history to top 1,500 yards rushing and 2,000 from scrimmage in his first two seasons — and he still has 11 games to pad those numbers.

But the Colts are more concerned with counting touches to make sure Taylor has a chance to keep what had been a ho-hum offense cranking on all cylinders.

“In my mind, the perfect game he’s getting at least 20 carries and having a big day," coach Frank Reich said. “In a good offensive game, we’re going to have 30 carries, we should have at least 30 carries as an offense. I see 20 of those going to Jonathan."

Wentz. Indy made the deal in March because it thought a change of scenery and a new supporting cast would help the once-promising quarterback regain his form. After a rough start, Wentz has strung together four solid games and has thrown only one interception this season.

The secondary. Injuries have depleted this group. Yes, an improving pass rush should helps, but what the Colts need most is healthy front-line bodies.

Darius Leonard. The two-time All-Pro linebacker had seven tackles, six solos, an interception that led to a score and forced a fumble on Sunday. He's had a takeaway in four straight games and he's done it all on a bad ankle.

Rock Ya-SIn. The third-year cornerback missed the previous two games with an ankle injury and left early against Houston with another ankle injury. Indy needs him on the field.

WR Parris Campbell is expected to multiple weeks and possibly the rest of the season after injuring his foot on a 51-yard TD catch in the first half. Campbell has only appeared in 14 games in three years. The Colts also won't know till later this week whether right tackle Braden Smith (foot/thumb), All-Pro guard Quenton Nelson (ankle) or defensive end Kemoko Turay (groin) will be available against the 49ers. Reich said it's undetermined whether Nelson will practice this week. Receiver T.Y. Hilton said he expected to play next week after injuring his quad during the fourth quarter Sunday.

174 — After running just eight times in the first half against Houston, Reich went with a heavy ground game in the second half. Indy finished with 26 carries for 174 yards, 6.7 yards per carry.

Indianapolis protected its home field for the first time Sunday. Now the Colts hit the road against a hungry and rested San Francisco team that former 49ers star and 2020 All-Pro DeForest Buckner knows well. Indy must play a physical, 60-minute game to get back to .500.