Colts sign Funchess, but stick to plan of re-signing players 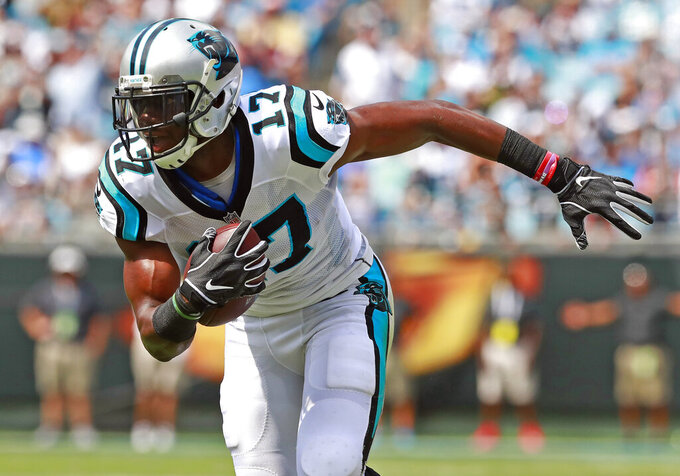 FILE - In this Sept. 23, 2018, file photo, Carolina Panthers' Devin Funchess (17) runs for a touchdown after a catch against the Cincinnati Bengals during the first half of an NFL football game in Charlotte, N.C. The Indianapolis Colts signed the former Carolina receiver to a one-year deal on Thursday, March 14, 2019. (AP Photo/Jason E. Miczek, File)

He re-signed his own players first.

Instead of making a big first-day splash, he barely made a ripple on the second day. And he's probably not finished yet.

It's all part of the grand plan.

"We have a very strict criterion of what we want to bring in," Ballard said recently. "We want players that want to get better, want to be great, want to be a part of the team, that are willing to sacrifice sometimes their individual stats for the betterment of winning and being a good teammate. If they fit into that criterion, absolutely they'll fit in."

After taking some risks last season, Ballard is betting on Funchess, Carolina's second-round pick in 2015. At 6-foot-4, 225 pounds, he gives Andrew Luck a bigger receiver than he's worked with in the past.

And if Funchess replicates what he did in 2017, when he caught 63 passes for 840 yards and eight touchdowns, he could emerge as the perfect complement to three Pro Bowl pass-catchers already on the roster: receiver T.Y. Hilton and tight ends Eric Ebron and Jack Doyle.

Last year, though, Funchess regressed. He had 44 receptions for 549 yards and four TDs and reinforced his reputation for drops. So Ballard reportedly gave Funchess a $10 million deal that could go up to as much as $13 million.

"I think the Colts are a great fit and I think they're ready to take that next step," Funchess said Thursday during a conference call. "I think if we win the Super Bowl, everything will take care of itself."

Ballard has made this journey before.

A year ago, he gambled on Ebron, the Detroit Lions' underachieving first-round pick from 2014. Ebron wound up catching more touchdown passes in 2018 than any tight end in the league and made his first Pro Bowl appearance.

Now, Ballard is at it again, this time with Funchess, Carolina's second-round pick in 2015 — though it's not a terribly risky move.

The Colts went into free agency with the most cap space in the league and if Funchess doesn't work out, the Colts could let him walk away next year and recoup all of their cap room — just like they did with Grant.

But the Colts' more important moves might have come before free agency opened Wednesday.

Last week, versatile defensive tackle Margus Hunt decided to stay in Indy after the best season of his career. His two-year deal is worth $9 million. On Wednesday, Ballard brought back Desir back for three years at $25 million and Milton, a key backup and special teams player. Desir recorded 79 tackles in 12 starts last season.

And Ballard has said he would like to keep oft-injured Clayton Geathers — if he can.

"We are going to make some tweaks to our program internally, but our mission will never change," Ballard said. "Everything we do matters. Our building understands that."