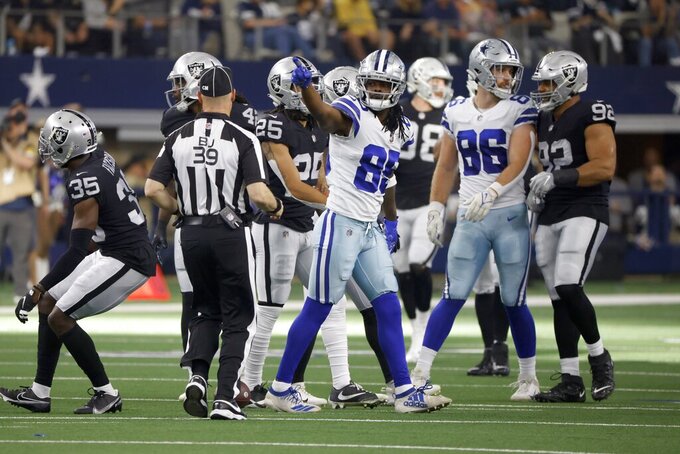 Dallas Cowboys wide receiver CeeDee Lamb (88) celebrates catching a pass for a first down in the first half of an NFL football game against the Las Vegas Raiders in Arlington, Texas, Thursday, Nov, 25, 2021. (AP Photo/Ron Jenkins)

Injuries have added no small amount of uncertainty to fantasy teams this week, but there are still some surefire bets to find the end zone in Week 13. These are my best bets to score at the WR and RB positions.

Taylor is having a landmark year in Indy, scoring in nine consecutive games and going over 100 yards in seven of those games. Taylor will take his robust 38.69% TD dependency on 209 carries into Houston this week, where he’ll take on a Texans team that’s our sixth-best matchup for RBs, having allowed 12 TDs to runners this season.

The only player with a higher TD dependency (41.14%) than Taylor on more than 200 carries is our man Mixon. Mixon has scored at least once in 8 of 11 games this season, scoring twice in four consecutive games. In Week 13, he meets a Chargers defense that has allowed 15 TDs to RBs this season, the third-highest total in the league. They’re our third-best matchup on the week.

Fournette found the end zone four times in Week 12, an embarrassment of fantasy riches. Only two backs saw more snaps than Fournette, who will undoubtedly pace the Bucs in touches against the Falcons this week as well. Our fourth-best matchup for opposing runners, Atlanta has given up the seventh-most fantasy points to RBs this season, and Fournette will be no exception as a dual threat who’s caught at least six passes in three consecutive games.

Mitchell was already a tour de force for the 49ers before Deebo Samuel injured his groin last week. Now Mitchell, who had a season-high 32 combined rushes and receptions in Week 12, has a chance to increase that number as the focal point of the San Fran offense against a reeling Seahawks squad. Seattle has given up the second-most fantasy points to RBs this season and is our fifth-best matchup on the week. Expect Mitchell to feast.

Mattison has put up more than 150 yards in both games he’s started this season, scoring in one of them. Dalvin Cook is expected to miss at least the next two weeks with a shoulder injury, so Mattison is back in action as lead back for Minnesota. He’ll face the Lions this week, a team that has allowed 17 TDs to RBs this season, behind only the Jets.

Adam Thielen has been the Vikings’ best scorer this season, reaching the end zone 10 times to tie the league high, but Jefferson is my best bet to score for Minnesota this week. Their Week 13 opponent, the Lions, have had Thielen’s number their past three meetings, keeping him to 135 yards and no TDs over that span. In fact, he only caught two passes for 40 yards in their first meeting this year, while Jefferson had 124 yards on seven catches. Scoring three times in his past four games, Jefferson has the better chance to do it again this week.

Amari Cooper is still dealing with COVID-19 and is questionable to play this week, but Lamb is recovered from his concussion in Week 11 and is set to start against the Saints this week. Lamb will be the focal point of the Cowboys passing attack against a team that has given up the fifth-most fantasy points to WRs this season and is our fifth-best WR matchup on the week. With a healthy 31.86% TD dependency, Lamb is one of the stronger WR plays in Week 13.

Patterson returned to action last week after missing Week 11 with an ankle injury, to score twice against the jaguars. He was more of a runner in that game, but look for Patterson to see more targets through the air this week, as his opponent, the Buccaneers, defend the run well. Patterson has caught five TDs this season and is the only real offensive threat the Falcons possess, aside from Kyle Pitts, who’s been stymied the past couple of weeks.

With a 47.62% TD dependency, Callaway has scored in three of his past four games and not doing much else yardage-wise. The Saints are going to need more out of Callaway this week to keep up with the Cowboys’ prolific offense, and he’s in a perfect spot to contribute scoring and yards against the spotty Dallas secondary. They’re our sixth-best WR matchup on the week, allowing the eighth-most fantasy points to WRs this season. Callaway is the Saints best bet to score through the air.

Smith had a down game in Week 12, only catching two passes for 22 yards, but he’s set to bounce back against a bumbling Jets secondary that has gotten worse as the season wears on, as they’re our fourth-best WR matchup on the week. RB Miles Sanders injured his knee last week, so expect the Eagles to lean heavily on the passing game with Smith as the focal point. He scored three of his four TDs this season in the three weeks that Sanders missed with an injury earlier in the season.