Commanders look to build on big win against woeful Texans 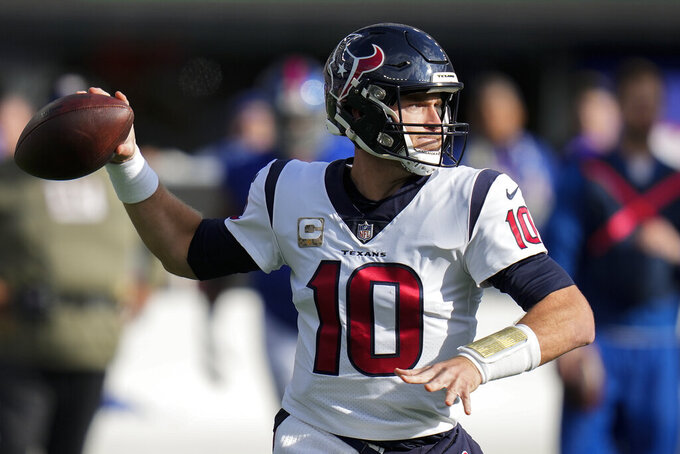 TURNOVER DIFFERENTIAL: Commanders minus-2; Texans: even

COMMANDERS PLAYER TO WATCH: Top wide receiver Terry McLaurin is a force in the passing game and particularly thrives on 50/50 balls. If he keeps winning those, the offense that otherwise relies heavily on the run can thrive.

TEXANS PLAYER TO WATCH: RB Dameon Pierce. The fourth-round pick leads all rookies and is fifth in the NFL with 772 yards rushing entering Week 11. He has six games with 100 yards of offense which is tied for second most in the NFL and is the most among rookies.

KEY INJURIES: Commanders QB Carson Wentz is expected to miss a fifth consecutive game after having surgery for a broken finger, making Taylor Heinicke the starter once again. ... DE Chase Young remains out more than a year since tearing the ACL in his right knee. ... LB Cole Holcomb could miss another game with a foot injury. ... Houston DL Maliek Collins missed practice Wednesday with a chest injury. ... WR Nico Collins was limited in practice this week with a groin injury, but is expected to play Sunday.

SERIES NOTES: Rivera worked as an assistant under Houston coach Lovie Smith for three seasons with Chicago from 2004-06, serving as his defensive coordinator. ... The Commanders are playing a second consecutive game on the road for the first and only time this season. ... This is Washington’s first game at Houston since Week 1 in 2014. ... Washington is 6-3 in November going back to 2020. ... Washington won the first two in the series and Houston has won the past three.

STATS AND STUFF: The Commanders are 3-1 since Taylor Heinicke replaced Wentz as starting QB. He has thrown five touchdowns and four interceptions. ... Rookie RB Brian Robinson Jr. rushed for a career-high 86 yards last week and had his second rushing TD. ... RB Antonio Gibson has 50-plus yards from scrimmage in four of his past five games. ... WR Curtis Samuel has 134 yards rushing and 483 receiving this season. ... DT Daron Payne leads the Commanders with a career-high 5½ sacks. Fellow Alabama product Jonathan Allen is next with 4½. ... Second-year LB Jamin Davis recovered his first career fumble last week. He has five-plus tackles in each of his past four games. ... S Darrick Forrest had his second interception of the season last week. ... Houston WR Brandin Cooks has at least 50 yards receiving in four of his past five home games. He had 98 yards receiving with two touchdowns in his only game against Washington in 2015. ... Collins had 49 yards receiving and his first TD reception of the season last week. ... WR Chris Moore had a season-high 70 yards receiving in Week 10. ... TE Jordan Akins led the Texans with a season-high 72 yards last week. ... DE Jerry Hughes had a sack and two tackles for losses last week. ... DB Jonathan Owens had 12 tackles last week for his sixth game this season with 10 or more tackles. ... Rookie LB Christian Harris had a career-high nine tackles last week. ... LB Christian Kirksey has at least five tackles in all nine games this season. ... DB Jalen Pitre ranks third among rookies with 63 tackles.

FANTASY TIP: McLaurin could be a good pickup after having a season-high 128 yards receiving last week for his third 100-yard game this season.