Contending but stumbling, Bengals regroup for second half 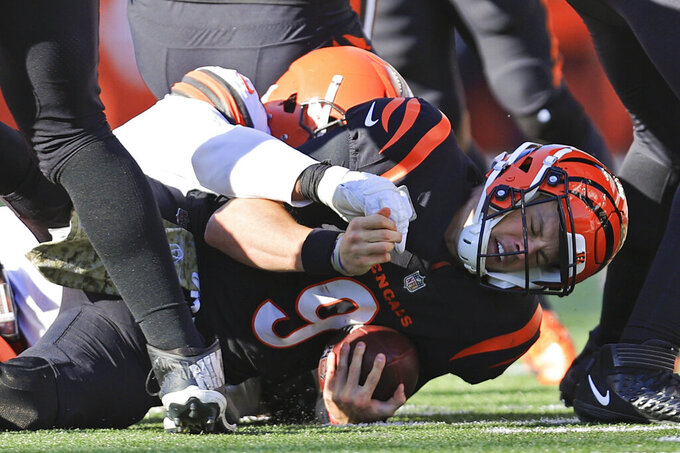 CINCINNATI (AP) — The off week is coming at an opportune time for the Cincinnati Bengals, who followed a promising start to the 2021 season with two bumbling losses in a row.

Who knows which version of the Bengals will show up next?

The Bengals (5-4) are still a much improved and so far winning team — they've already won one more game than all of last year — but there's no question the past two weeks have been a mess.

So there is some measure of hand-wringing in the Cincinnati camp at the halfway point, but confidence that the culture coach Zac Taylor has worked hard to build will keep the team from spiraling.

Fortunately for the Bengals, there's also a bye week to help them try to reset.

“I think people are going to try to paint a picture of overreaction when you lose two games in a row — we’re not,” Taylor said, "We’re going to correct those things that we need to correct and use this bye week to get our bodies back and make sure we’re healthy going into the back half of the season.

“This isn’t unusual for teams to lose two games in a row in this league,” he said. “It feels awful, trust me, to sit here after two consecutive losses. It’s important we’re consistent with our approach throughout. We know we’ve done some good things over these first nine games of the season.”

The Bengals were rolling at 5-2, their best start in six years, picking up their fifth victory with a joyful 41-7 smashing of AFC North bully Baltimore on the road.

Then something happened, although nobody can say exactly what. The Bengals took a baffling 34-31 loss to the then-1-5 New York Jets. On Sunday they got kicked all over Paul Brown Stadium by the Cleveland Browns, whose 41-16 victory was the largest margin over their in-state rivals since 1987.

“I know the guys we have in that locker room," he said. "We’ve got tough, resilient guys that are excited to come back to work. (Sunday was) a tough day. We didn’t play very well, and it showed on the field. We’re halfway through the season, so we’ve still got a long ways to go. Everything is still in front of us, and we’re going to come back to work ready to go.”

Much is on the shoulders of Burrow. Not much was working well against the Browns, but overall the Bengals' offense still turns on the skill and creativity of Burrow, who remains among the NFL leaders in several passing categories. He has been good at exploiting defenses, but his two interceptions Sunday were killers, especially the 99-yard pick-six by Denzel Ward in the first quarter.

The defense was a strength in the first part of the season, but has been inconsistent and has missed an alarming number of tackles lately. Lots of plays that should have been snuffed out became big gains. Burrow is still getting hit too much. The pass blocking has not been good enough. Burrow was hit 12 times and sacked five times Sunday.

NFL teams don't like to waste draft picks on kickers, but Evan McPherson has been money. The fifth-round 2021 pick out of Florida, McPherson left with the best field-goal percentage in SEC history (85%). He's had two winning field goals and missed getting another by inches. He's made 11 of 14 attempts and all 27 PATs.

A few weeks ago, rookie receiver Ja'Marr Chase was making explosive plays and being talked about as a candidate for NFL Offensive Rookie of the Year. That chatter has died down. He caught just three passes for 32 yards in the Jets loss and followed that with his worst game as a pro vs. Cleveland. He dropped a pass in the end zone, dropped another that might have carried him into the end zone, and lost a fumble the Browns turned into points.

CB Trae Waynes, who missed all of last season with a pectoral issue, went on injured reserve last month with a hamstring injury. ... G Xavier Su’a-Filo has been out with a knee injury for a month. ... LB Jordan Evans (knee) is on the injured list. ... S/KR Brandon Wilson and LB Akeem Davis-Gaither (foot) went out of Sunday's game and didn't return. Taylor said Wilson tore his ACL. There was no update available on Davis-Gaither. ... DE Cam Sample and WR Auden Tate were ruled out on Monday with unspecified issues.

Every player who stepped to the podium after Sunday's loss spoke of the team's culture and how their regard for each other will help them get through this rough patch. The Bengals have displayed their potential but haven't learned how to play up to it week after week. They start the second half of the schedule on Nov. 21 against the Raiders (6-2).