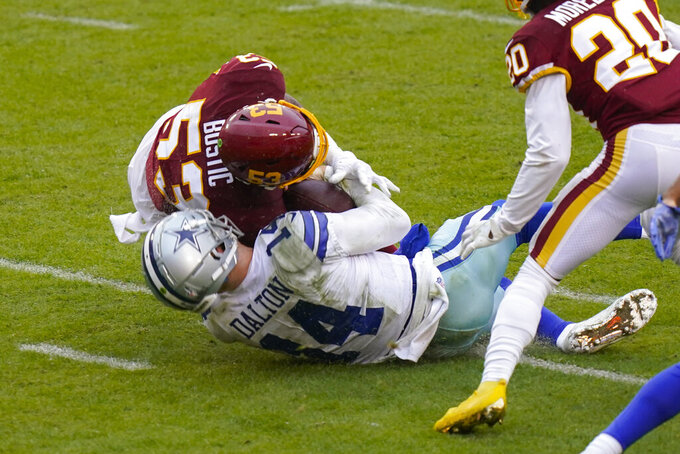 Dallas Cowboys quarterback Andy Dalton (14) is hit by Washington Football Team inside linebacker Jon Bostic (53) in the second half of an NFL football game, Sunday, Oct. 25, 2020, in Landover, Md. Dalton left the field after this hit and Bostic was ejected from the game. (AP Photo/Patrick Semansky)

The Dallas Cowboys have placed quarterback Andy Dalton on the reserve COVID-19 list on Tuesday, keeping him out a second straight game after he was sidelined by a concussion.

Dalton will be the first Dallas player to go on the COVID-19 list since before the season.

The loss of Dalton likely means a second consecutive start for rookie Ben DiNucci against undefeated Pittsburgh on Sunday.

The seventh-round pick replaced Dalton for last weekend’s 23-9 loss to Philadelphia. The Cowboys (2-6) have had three starting quarterbacks this season after star Dak Prescott broke his ankle in Week 5, ending his season.

Dalton was the starter in Cincinnati for nine years before the Bengals drafted Joe Burrow first overall in this year’s draft and released the former TCU standout. Dalton signed a one-year contract to be Prescott’s backup.

The 33-year-old Dalton got a concussion in a 25-3 loss to Washington on a hit that led to the ejection of linebacker Jon Bostic, who was also fined $12,000.

The Cowboys have scored just one touchdown in three full games — all losses — without Prescott, who was leading the NFL’s No. 1 offense before his injury. That one TD was a pass by Dalton late in a blowout loss to Arizona. Dallas doesn’t have a touchdown the past two games.

DiNucci was 21 of 40 for 180 yards and lost two fumbles among his four sacks against the Eagles. Owner Jerry Jones’ reaction to DiNucci’s first start didn’t inspire much confidence for Dallas’ chances against the Steelers, who lead the NFL in sacks and are third in interceptions.

“I think that it was a lot for him,” Jones said on his radio show Tuesday. “It was frankly more than he could handle. I don’t know what you could have expected for somebody to come in under those circumstances.”

The other Dallas quarterbacks in play at the moment are Garrett Gilbert, who was DiNucci’s backup against the Eagles, and Cooper Rush. Dallas should have Rush on the practice squad this week. He was Prescott’s backup for three seasons before the Cowboys signed Dalton and released him.