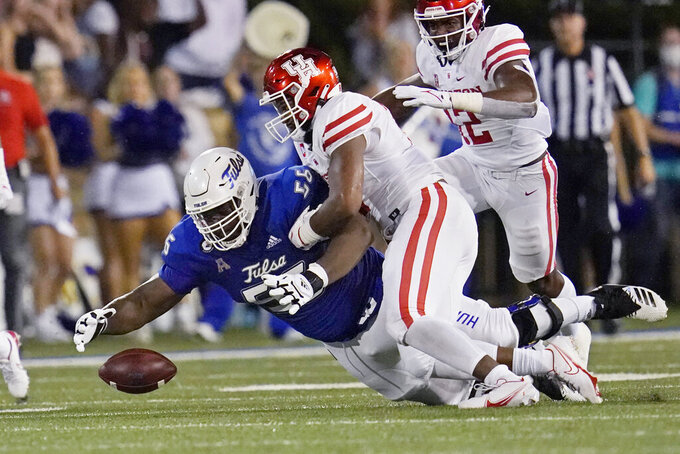 FRISCO, Texas (AP) — The last time the Dallas Cowboys drafted an offensive lineman in the first round, their bevy of blockers was in transition.

The Cowboys took Tulsa's Tyler Smith with the 24th overall pick of the NFL draft Thursday night, adding to a once-dominant line that is replacing two starters and could have issues with others.

Smith, who skipped his final two seasons of eligibility, was the choice after two other targets were already off the board in Boston College's Zion Johnson and Kenyon Green of Texas A&M.

The Cowboys are the most unsettled they’ve been up front on offense since 2014, when they drafted a blocker in the first round for the third time in four years.

The first of those choices was eight-time Pro Bowl left tackle Tyron Smith at No. 9 overall in 2011, followed by Travis Frederick late in the first round in 2013 and five-time All-Pro right guard Zack Martin in the middle of the first a year later.

The trio helped form one of the NFL’s most dominant lines. But Frederick retired early after dealing with an autoimmune disease that attacked his nervous system, while injuries have become an issue for Smith. Martin is the only reliable anchor left.

And now Tyler Smith could be the next walk-in starter as a first-rounder, perhaps at guard instead of his college position. Coach Mike McCarthy said he would have a chance to start at left guard, and could back up Tyron Smith at left tackle.

“At the end of day, the work is going to speak for itself,” Tyler Smith said. “Having those guys around me, being able to learn from those guys, and play with those guys, that’s going to be huge for my development as a player.”

Center Tyler Biadasz started all 17 games and the wild-card loss to San Francisco, but there are questions over whether he is the long-term answer. Undrafted third-year player Terence Steele filled in for Collins through injuries and suspensions over the past two seasons and is poised to replace him again.

Dallas also is touting Josh Ball, a fourth-round pick last year, as an option with position flex on the right side with the newcomer Smith on the left. Ball didn't play as a rookie after spraining his ankle in training camp.

“Zack and Tyron have been in the league awhile and certainly are the best in the business,” executive vice president of personnel Stephen Jones said. “But I do think we're doing a good job of getting the right pieces in place to be able to push those guys in as we move forward. I really like how we're transitioning, but at the same time I think we still have a chance to have a top-five offensive line in this league.”

If Tyler Smith ends up replacing Williams, he will have a similar issue with penalties to overcome. He was among the most penalized players in FBS last season, and joins a team that led the NFL in penalties.

“I'm definitely aware of his performance last year, but it's two separate topics in my view,” McCarthy said. “Obviously playing at Tulsa and obviously our team last year, I really don't see any correlation to it. We need to focus on penalties, and we've taken those steps already in our offseason program. Tyler will be part of the program when he gets here, and I don't have any concerns.”

The Cowboys have long valued versatility with offensive linemen, and that could come into play with Smith. If Steele remains the replacement for Collins, Dallas might want to try the 6-foot-5, 325-pound Smith inside.

Smith played high school football in the Dallas area, He was suspended for the 2021 season opener Tulsa over his role in a brawl after the Armed Forces Bowl against Mississippi State in 2020. Smith started the remaining 12 games.