Cowboys get rhythm, higher seed for playoffs; Niners next 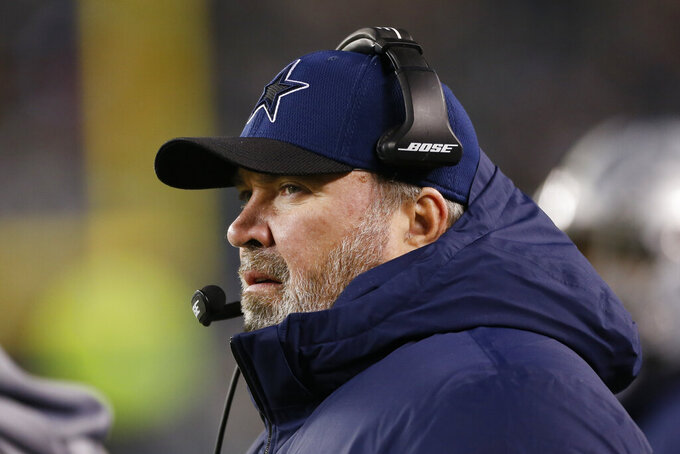 Dallas Cowboys head coach Mike McCarthy looks on from the sideline during the second half of an NFL football game against the Philadelphia Eagles, Saturday, Jan. 8, 2022, in Philadelphia. (AP Photo/Laurence Kesterson)

Dak Prescott and the Dallas Cowboys didn't see the regular-season finale at Philadelphia as meaningless because they wanted to feel an offensive rhythm going into the playoffs.

Turns out it mattered in the postseason pecking order, too.

The Cowboys (12-5) will face old playoff rival San Francisco (10-7) in a wild-card game at home Sunday when most scenarios had them in a rematch with Kyler Murray and Arizona two weeks after losing to the Cardinals at AT&T Stadium.

After beating the Eagles 51-26 on Saturday to finish 6-0 against the NFC East, the division champions watched Sunday as the outcomes lined up for them to move up to the third seed.

Dallas also avoided a divisional-round trip to potentially frozen Green Bay, where coach Mike McCarthy went to the playoffs nine times in 12-plus seasons and won a Super Bowl.

If the favorites win, the Cowboys would return to Tampa Bay, where they lost to the reigning champs and seven-time Super Bowl winner Tom Brady on a last-second field goal in the opener.

It's hard to know what Dallas accomplished against the playoff-bound Eagles with Prescott's career-high five touchdown passes and scoring runs from two players who likely won't even be active in the playoffs. Philadelphia sat plenty of starters, including quarterback Jalen Hurts, because there wasn't a chance to be seeded higher than sixth.

“The stats aligned, the way that we finished was great,” Prescott said. “That’s what we wanted to do to carry momentum, get in a rhythm. But none of that matters anymore.”

WR Cedrick Wilson could be an X factor in the playoffs with Michael Gallup sidelined by a knee injury. While it was mostly against backups, Wilson had a career-high 119 yards receiving with two touchdowns against the Eagles. His 23.8-yard average per catch was eye-opening considering how much teams have tried to take away downfield opportunities for Prescott and the Cowboys.

K Greg Zuerlein has an NFL-high six missed extra points, including one early against the Eagles. He has missed at least one kick (field goal or PAT) in eight games this season. The Cowboys will say they're confident in the 10-year veteran, but a few might be crossing their fingers behind their backs when Zuerlein sets up because there's about a 50-50 chance of a miss going into a game.

The Cowboys had their fifth game with at least 150 yards rushing against the Eagles (171 yards). It was the first since four consecutive games ending in Week 5, when Dallas was on a six-game winning streak. The per-carry average was at least 5.0 yards for the sixth time this season.

It's difficult to say how much it mattered with Philadelphia not playing as many starters, but it's safe to say Dallas feels better about a running game that fell short of 100 yards five times in a 10-game stretch before the regular-season finale.

WRs Amari Cooper and CeeDee Lamb were guilty of bad optics by showing up courtside without masks when the Dallas Mavericks retired franchise icon Dirk Nowitzki's No. 41 last week. That was the same day rookie linebacker Micah Parsons tested positive for COVID-19, which was two days after Parsons was maskless courtside.

While Cooper was somewhat defiant on his radio show, both seemed to have gotten the message by the time they talked to reporters after the Philadelphia game.

“We’re going to tighten it up,” Lamb said. “We understand where we’re trying to go. I didn’t really get the criticism part. I understand we’re in the playoffs and a lot of things can come from going to the (Mavericks) game. COVID is a big thing, so I’m trying to tighten things up and prepare for the next game.”

Said Cooper, “We’re going to do everything we can do to not get sick. If that means isolation, then that’s what that means. Hopefully we can isolate enough to not catch it.”

RB Tony Pollard, the backup to Ezekiel Elliott, didn't make the Philadelphia trip because of a foot injury he's been dealing with since a victory over New Orleans on Dec. 2. But Pollard has been playing through the issue.

51 — The victory over Philadelphia was the first time Dallas has scored at least 50 points on the road.

The Cowboys and 49ers meet in the playoffs for the first time since three consecutive NFC championship games in the 1990s. Each of those winners (Dallas during the 1992 and ‘93 seasons, San Francisco in ’94) went on to win the Super Bowl. Their eighth postseason meeting is tied for second most in the Super Bowl era. The Cowboys and Rams have met nine times.