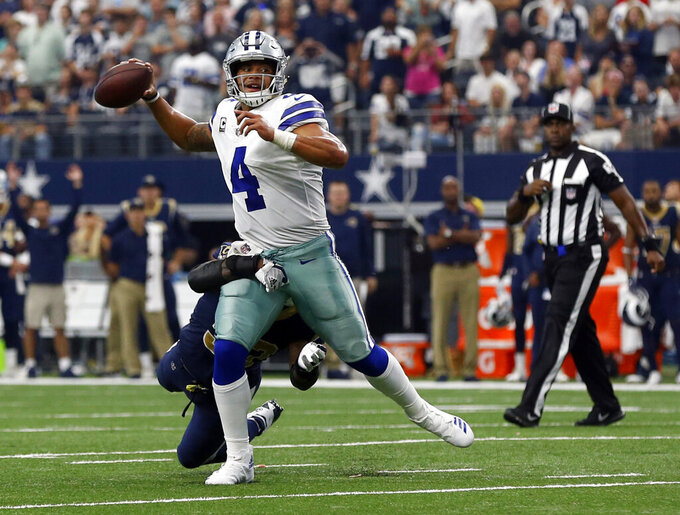 FILE - Dallas Cowboys quarterback Dak Prescott (4) throws a pass for a two-point conversion attempt to wide receiver Terrance Williams in the second half of an NFL football game against the Los Angeles Rams in Arlington, Texas, on Sunday, Oct. 1, 2017. The Cowboys are still trying to end a stretch of more than 25 years without a deep playoff run. It will be on their minds again when they report to training camp in California later this month, July 2022. (AP Photo/Ron Jenkins, File)

LAST YEAR: The Cowboys won the NFC East for the third time in quarterback Dak Prescott's six seasons, but again failed to go deep in the playoffs, losing a home wild-card game to San Francisco. Dallas hasn't reached an NFC championship game since the 1995 season, when the storied franchise won its fifth Super Bowl. The offense was one of the best in the NFL before Prescott strained a calf, and was inconsistent at best the rest of the way. NFL Defensive Rookie of the Year Micah Parsons led a dramatic turnaround for a much-maligned unit.

CAMP NEEDS: Prescott could use a healthy camp after a strained throwing shoulder sidelined him almost all of the preseason last year. He was coming off the gruesome broken ankle that ended his 2020 season in Week 5. There are several questions on the offensive line that need answers in camp. Topping the list is left guard after Dallas let Connor Williams go in free agency. First-round pick Tyler Smith is a tackle, but could fill that spot to start his career. C Tyler Biadasz was inconsistent last year and shouldn't get too comfortable. LT Tyron Smith hasn't been able to stay healthy in recent years, so the Cowboys will have to think about the lineup behind their eight-time Pro Bowler.

KEY CAMP COMPETITIONS: Connor McGovern will be the player to watch alongside the rookie Smith at right guard. DE Sam Williams, Dallas' second-round pick, could challenge for a starting job opposite DeMarcus Lawrence, who returned on a reworked contract and will be important in trying to offset the loss of Gregory. The Cowboys thought Gregory would be back, but he made a late switch to Denver in free agency. Williams' primary competition could be Dorance Armstrong, who re-signed in free agency. The pecking order behind new No. 1 receiver CeeDee Lamb will be a topic with Michael Gallup still recovering from a 2021 knee injury and unlikely to be ready until early in the season. LB Leighton Vander Esch, a 2018 first-round pick, is back on a one-year contract alongside Parsons. But the Cowboys are ready for a longer look at second-year player Jabril Cox, who missed most of last year with a knee injury.

EXPECTATIONS: Owner Jerry Jones hired coach Mike McCarthy in 2020 because he thought the Super Bowl winner from Green Bay could end Dallas' long stretch without a deep playoff run. The pandemic year was a throwaway before the team cruised to the division title last year. The 23-17 loss to the 49ers ranks high on Jones' list of disappointments in the 33 years since he bought the Cowboys. If Dallas doesn't go deep in the postseason this time, McCarthy's job security will be a hot topic.