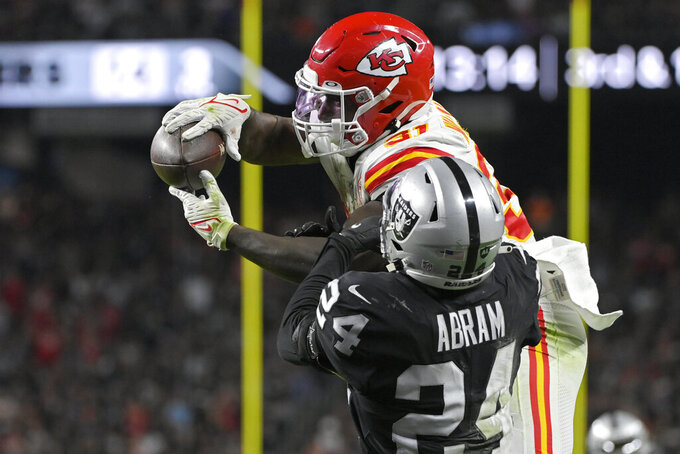 Kansas City Chiefs running back Darrel Williams (31) catches a pass in the end zone for a touchdown over Las Vegas Raiders safety Johnathan Abram (24) during the second half of an NFL football game, Sunday, Nov. 14, 2021, in Las Vegas. (AP Photo/David Becker)

KANSAS CITY, Mo. (AP) — The most dynamic offense in the NFL will be on display inside Arrowhead Stadium on Sunday.

It won't belong to the Kansas City Chiefs.

Oh, the two-time defending AFC champs are still capable of scoring points — just ask the Raiders after their 41-14 blowout loss last week. But the offense that has been seemingly unstoppable most of this season belongs to Dak Prescott and the Dallas Cowboys, who lead the league in yards per game and points through the first 10 weeks.

The last time they finished on top in both? It was 1971, and the Cowboys wound up winning the Super Bowl.

“They're the No. 1 offense in the league in a few different categories,” Chiefs coach Andy Reid acknowledged. “Dak is good, and so is Ezekiel (Ellitott), along with the rest of their cast there. They have a lot of good players on that side of the ball. It's a great challenge for our defense. Our guys know that. You just have to turn on the tape to see it.”

They would see Prescott riding a career-best six-game streak with multiple touchdown throws. And Elliott punching in for two touchdowns in last Sunday's blowout of the Falcons, when CeeDee Lamb also had 94 yards receiving and two scores.

It was the third time this season the Cowboys (7-2) have topped 40 points in a game.

Sounds a lot like the Chiefs of past years.

“I have a lot of respect for them,” Cowboys coach Mike McCarthy said, “but I wouldn’t say we sat down and said, ‘We want to be like the Kansas City Chiefs.′ ... They’re obviously the beacon of their division and frankly of the NFL, just with their success particularly the last three years. They’re in our cutups. They’re part of some of the things we look at postseason, in-season as far as trends. But I wouldn’t say we model ourselves after them.”

For one thing, the Cowboys have been a whole lot better on defense this season. But despite numbers that suggest the Chiefs are among the league's worst on that side of the ball, they've been better the past few weeks.

That has coincided with a return to health for several guys and the arrival of defensive end Melvin Ingram.

And a much biggest test for that talented Dallas offense.

“It seems like y’all ask us that every week: ‘Is this a statement win?’ This is another football game,” Elliott said. “Every week is important in this league. Every team we play is a very good football team. If we go out there, get a win on the road in a hostile environment, I think that would be a statement.”

Cowboys left tackle Tyron Smith returned to practice on a limited basis from an ankle injury and could play Sunday. Also expected back is kicker Greg Zuerlein, who was on the COVID-19 list. Lirim Hajrullahu had handled kicks against Atlanta.

The Chiefs hope to have right tackle Mike Remmers back from a knee injury. They also could have running back Clyde Edwards-Helaire back for the first time since hurting his ankle against Buffalo in Week 5.

McCarthy has plenty of experience coaching in the Metrodome from his time with the Packers, and the Cowboys played the Vikings at U.S. Bank Stadium. But both those buildings pale in comparison to the noise of Arrowhead Stadium.

“When we went up to Minnesota, it was about 120 decibels where Arrowhead has been to 140,” McCarthy said. “Not a lot of our players have played there. ... Noise will be a big part of our preparation this week.”

One thing Dallas will try to do Sunday is keep Mahomes in the pocket. That's because even though the former league MVP is excellent with his feet set, the Chiefs quarterback becomes even more dangerous when he escapes.

"We have a segment in practice to work scramble drills,” McCarthy said. “Patrick is outstanding at it. You can see, I think between 20-23% of their plays are extended plays. It’s a major focus for us this weekend.”

The Cowboys also figure to play a lot of Cover 2 defense against Kansas City, using their two safeties to keep the Chiefs from attacking deep downfield. It's a scheme that just about every team has used against them this season.

“Your short-intermediate game becomes very important and how we call plays to stretch the field becomes important,” Reid said, “horizontally and vertically to create some space to throw. All that’s important.”

Mahomes, who was born and raised in Tyler, Texas, grew up cheering for the Cowboys. It was also the favorite team of his dad, former big league pitcher Pat Mahomes. But the fandom hasn't really lasted since the Chiefs QB joined the NFL.