Cowboys WR Cooper goes on COVID-19 list, out against Chiefs 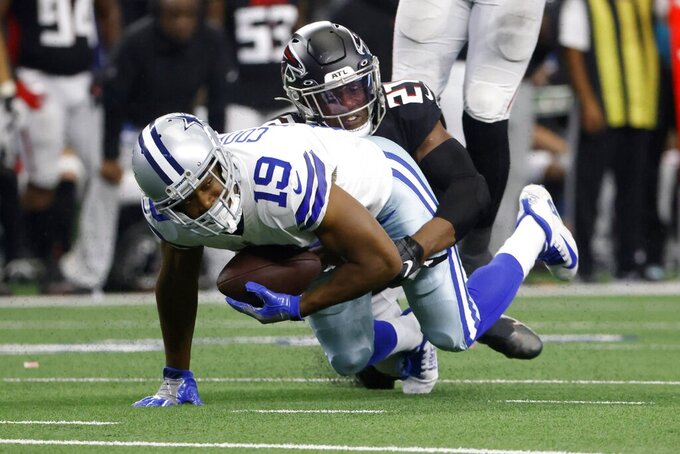 Dallas Cowboys wide receiver Amari Cooper (19) catches a pass for a first down before being tackled by Atlanta Falcons safety Duron Harmon in the first half of an NFL football game in Arlington, Texas, Sunday, Nov. 14, 2021. (AP Photo/Ron Jenkins)

FRISCO, Texas (AP) — Dallas receiver Amari Cooper has been placed on the COVID-19 reserve list and will miss the Cowboys' game Sunday at Kansas City.

The timing of the move Friday raises questions about Cooper's availability for the Thanksgiving game against his former team, the Las Vegas Raiders.

Cooper is second to CeeDee Lamb in catches, yards and touchdowns. Cooper has 44 catches for 583 yards and five touchdowns.

The seventh-year pro's absence comes in the second game back for receiver Michael Gallup, who missed seven games after straining a calf in the opener.

The Cowboys have the depth to absorb the loss of the player considered their No. 1 receiver since he was acquired him from the Raiders in a midseason trade in 2018.

Besides Lamb's team-leading six touchdowns receiving, Cedrick Wilson has three. Malik Turner has his first career two-TD game this season, although both after the Cowboys fell behind by 30 in a 30-16 loss to Denver.

Although Cooper has battled nagging injuries frequently since coming to Dallas, he hasn't missed a game since the trade. The COVID-19 absence will end a run of 50 consecutive regular-season games with the Cowboys.