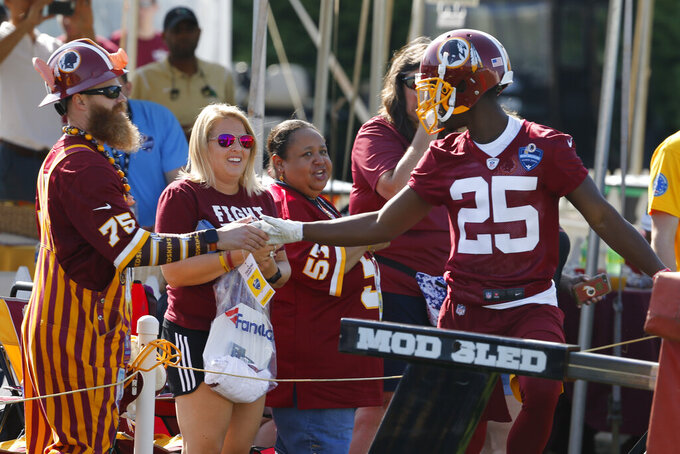 FILE - In this July 25, 2019, file photo, Washington Redskins cornerback Jimmy Moreland (25) greets fans as he heads to the practice field during the first day of NFL football training camp in Richmond, Va. He's one of the smallest players in camp with the Redskins, but cornerback Jimmy Moreland will arrive at the team's practice facility in Ashburn on Tuesday, Aug. 13, having had one of the biggest impacts on the team so far this preseason. (AP Photo/Steve Helber, File) 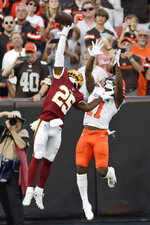 RICHMOND, Va. (AP) — Jimmy Moreland is one of the smallest players in the Washington Redskins' training camp and the cornerback is making one of the biggest impacts during the preseason.

The 5-foot-10, 182-pound seventh-round draft choice out of James Madison has been all over the field for Washington since he arrived in camp. And his presence was never larger than in Washington's preseason opener in Cleveland.

In one three-play series against the Browns, Moreland knocked a fade route pass away from a Browns receiver on second-and-goal from the one, then he batted down a slant pass on third down and he followed that up by forcing a fumble that the Redskins recovered on fourth down.

Moreland also forced another fumble later in the game that the Redskins also recovered.

"He was active," head coach Jay Gruden said after the game, a 30-10 loss on Thursday night. "He's been active the entire camp. He did some good things. I'm glad the game wasn't too fast for him. ... I was pretty impressed."

Moreland finished with five solo tackles, passing one test Gruden had said would be key.

"I think the most important thing for him, when you talk about a guy that size, you have to see his physicality. How he tackles. That's the biggest thing. If you can't tackle you can't play," Gruden said early in camp.

Moreland was neither surprised by his performance nor overly impressed by it.

"I'm always making plays wherever I go so it just felt normal to me," he said after being used as a both a slot defender and on the outside in the first practice after the game. "It may be a surprise to a lot of other people, but if you were the Washington Redskins, you've seen at OTAs and training camp, you wouldn't expect less than that."

It was during OTAs that Moreland first called attention to himself, intercepting three passes in one session. Defensive coordinator Greg Manusky said he'd never seen a player do that in nearly two decades in the NFL.

Moreland said his size has always been a potential shortfall in the eyes of others. But he can list a number of similarly sized defensive backs in the NFL, and point to the only resume he can offer as proof he can play.

At James Madison, he set a school record with 18 career interceptions and returned six for touchdowns.

Despite all the kudos he got for his NFL debut, film study told a different story.

For example, when he knocked the ball away from former James Madison teammate Ishmael Hyman with Hyman closing in on the end zone, it was a great recovery after Hyman had beaten him on a crossing route over the middle.

With only 53 spots on the roster once the games count, Gruden also places a premium on players who can do more than one job. Besides playing inside and out, Moreland is auditioning as a punt catcher as well.

In his mind, he'll do whatever it takes, then prove he belongs when given the opportunity.

"My expectation is the same — make the 53-man roster and give my best effort to the team," he said. "Any team I can get on. Special teams. If it's defense, kick return, punt return. Anything."

Or, like in that one series against Cleveland, everything.